Regardless of how you feel about impeaching President Obama, give these four people credit: Standing out in the blazing sun on a highway overpass and holding signs for hours on end to remind everyone about the anniversaries of 9/11 and Benghazi isn’t an easy task. It’s hot, sweaty, and loud, with horns  honking constantly.

Nationwide, members of the group are waving flags and holding signs on overpasses. The local bunch chose the Hulen Street overpass at I-30. 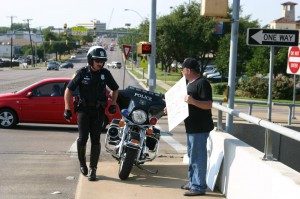 This small group had been out there for a couple of hours when a motorcycle cop stopped to talk to them for a few minutes.

“The officer said someone had called in complaining about us,” said Kim Doege of North Richland Hills, who was holding a “Remember Benghazi” sign. “He just asked if we were getting in the road and blocking traffic. I said, no this is peaceful, we just want people to remember Benghazi and the four who died, and 9/11 also. It’s to bring awareness, to show support, and to remember.”

The cop wished them well and went on his way.

North Richland Hills resident Betty Hoelk’s foot was in a cast but she took time to spend half a day standing on the overpass. (By the way, overpasses bounce. They actually rock up and down while you’re standing on them. This feels weird. It would feel normal if you were on the deck of a ship floating in the ocean. It feels disconcerting when standing on a concrete bridge 50 feet above the highway.) 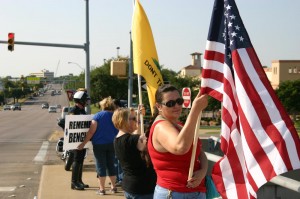 “We had a cop in a suburban go by and he did his little siren in support, and I thought that was really great,” Hoelk said. “Cops really can’t do that, and this one took the time to slow down and let us know he was supporting us.”

“So you’re happy because he broke the rules for you?” I said.

I was joking, but she wasn’t in a joking mood.

She and her husband both served in the military, and she has every right to express her opinion on an overpass, she said. (I’m not sure who was telling her she couldn’t.) 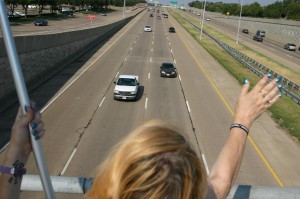 “We did our time to try to protect and help our country,” she said, her voice slowly rising and trembling slightly. “And that’s why we’re here today. It’s our right to stand up for our freedoms. These people that died 12 years ago today, died for our freedom, that’s why they died, because people hate us for our freedom and our right to believe in the way that we do. And that’s all I’m here to do is to say, you know what, it’s my right and nobody, no president, no country, nobody is going to take my right away from me. I fought for it. My husband fought for it. My military is fighting for it today. My biological mother, my biological father, my adoptive uncle, I’ve got military in both my families, up one side and down the other, we all fought for the right to be here today and nobody is going to tell me I can’t.”

About that time a car pulled up beside them, and the driver, a friendly woman, rolled down the passenger side window. Doege went to see what she wanted. The driver handed her a grocery bag filled with cold drinks, and wished them all well. 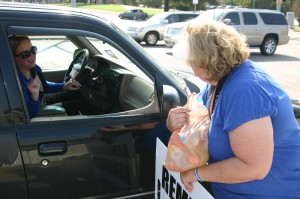