Church sermons during the Christmas holidays typically revolve around the baby Jesus, Mother Mary, the three wise men, and a star. What usually gets left out is the part where bloodthirsty King Herod starts slaughtering all the babies. Herod tolerated no threats to his power, even from a little tyke being touted as the King of the Jews. The gospel of Matthew describes the “Massacre of the Innocents” when Herod sentenced to death every male child under age 2 born near Bethlehem.

On a recent Sunday, Bryce focused her sermon on this bloody chapter of religious history, speaking frankly about the brutality. She sang a cappella an old English Christmas carol that describes the horrific events. She noted that Herod didn’t get his own hands dirty: He sent troops to do his butchering.

“Can you imagine walking that journey?” she said. “Would we be able to walk alongside those soldiers, knowing what we had to do and what would happen to us and our families if we failed to carry out the order?”

Then she segued to modern troops fighting overseas and considered the brutalities they’re sometimes sent to perform and the moral conflicts they face. At one point she referred to a new movie starring Mark Wahlberg about a Navy SEAL team (but promised “no spoilers”).

It was just the bold and progressive style of oration that First Congregational members wanted when they went looking for a new pastor in 2011. The church was founded in 1903 and has been at its current location since 1950. The church has about 300 members, though only about half that many attend regularly.

“We wanted someone to come in and represent our open and affirming view, especially in this part of Texas, where we are more conservative than in other places,” said Paul Andow, who served on the search committee that found Bryce. “Looking at her profile, it was like she was sitting in the room when we were discussing what we needed,” he said. “The way she wrote her profile was everything we were looking for.”

The church, like Bryce, was a little different. As of 2010, only about a dozen churches among the hundreds located in the Metroplex had declared themselves as “open and affirming.”

“In North Texas, there are not that many formally ‘open and affirming’ churches across the mainline denominations,” said Joretta Marshall, dean and professor of pastoral care at TCU’s Brite Divinity School. “First Congregational is a church that has vitality because it really does work to welcome all of God’s people. It’s a really nice gift to the community.”

Marshall couldn’t think of any other out-of-the-closet lesbian leading a church whose congregation is predominantly heterosexual.

Carol Burnett was a moderator at First Congregational during the hiring process, and she recalled the search committee reviewing more than 50 applications. Six potential pastors were narrowed down to two. The search committee favored Bryce, although her sexuality worried a few church members. Declaring a church as open and affirming is one thing; hiring a gay pastor is another.

For some “it was a big step,” Burnett said.

The few members who expressed concerns back then are firmly aboard the Bryce bandwagon now, she said.

Terri Andow said the only complaints she and her husband have heard about Bryce come from people outside the church. “We’ve had family members say, ‘You’re going down the wrong path’ and ‘You need to read your Bible,’ ” she said. “We do. We just read it a little bit different.”

Bryce and November bought a house in the Candleridge neighborhood and settled in. They like to take walks but were careful not to hold hands at first, unsure about their surroundings. But before long, they felt some neighborly love.

“Our next-door neighbors are an older couple in their 80s, and the first thing they did was bring us pimiento cheese sandwiches and Dr Peppers for lunch, and then they had a big neighborhood party for us,” November said.

About 30 neighbors showed up, all of them straight couples, and they couldn’t have been nicer, November said.

Bryce enjoys living closer to her son and spending more time with him and his family. Allison and his wife, Sunny, walked in a gay pride parade last October in Fort Worth alongside his mother and November, whom Allison considers a second mom.

Church membership has increased by about 20 percent since Bryce’s arrival in December 2012. One of the newer members is Jim Benton, a Brite Divinity School graduate and a longtime Disciples of Christ minister. He quit preaching 20 years ago, frustrated by what he considered hypocritical behavior in too many churches.

“I am a liberal, open-minded, and accepting person, and it seems like there are always people who share those views in churches I have served,” he said. “But there are also people who are closed to new things and new ideas. There is always a struggle between those two impulses in churches where I’ve been. I grew weary of that struggle.”

Benton eschewed church for 10 years, until his daughter invited him to First Congregational. He found not only a progressive preacher in Bryce but a congregation that touched his heart with their openness.

“This is a congregation in Fort Worth, Texas, of all places, that hired an open lesbian pastor,” he said. “It’s very rare, the genuineness. Every church talks about it but this church really demonstrates it. It’s not a gay church, it’s not a young people’s church, it is an open, loving, accepting church, which is extremely rare.”

The queen of the congregation is pleased with the selection, and she couldn’t care less that Bryce has chosen a woman as her life partner.

“Her caring about people is what impresses me,” Blackman said. “I have no problems with anyone’s beliefs. I have my own beliefs and my own feelings, and each person is entitled to their own beliefs. This church allows us to believe. We don’t have to convince or convert anyone else. I’m able to sit here and feel comfortable with people with various beliefs.” 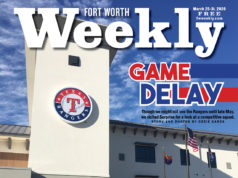