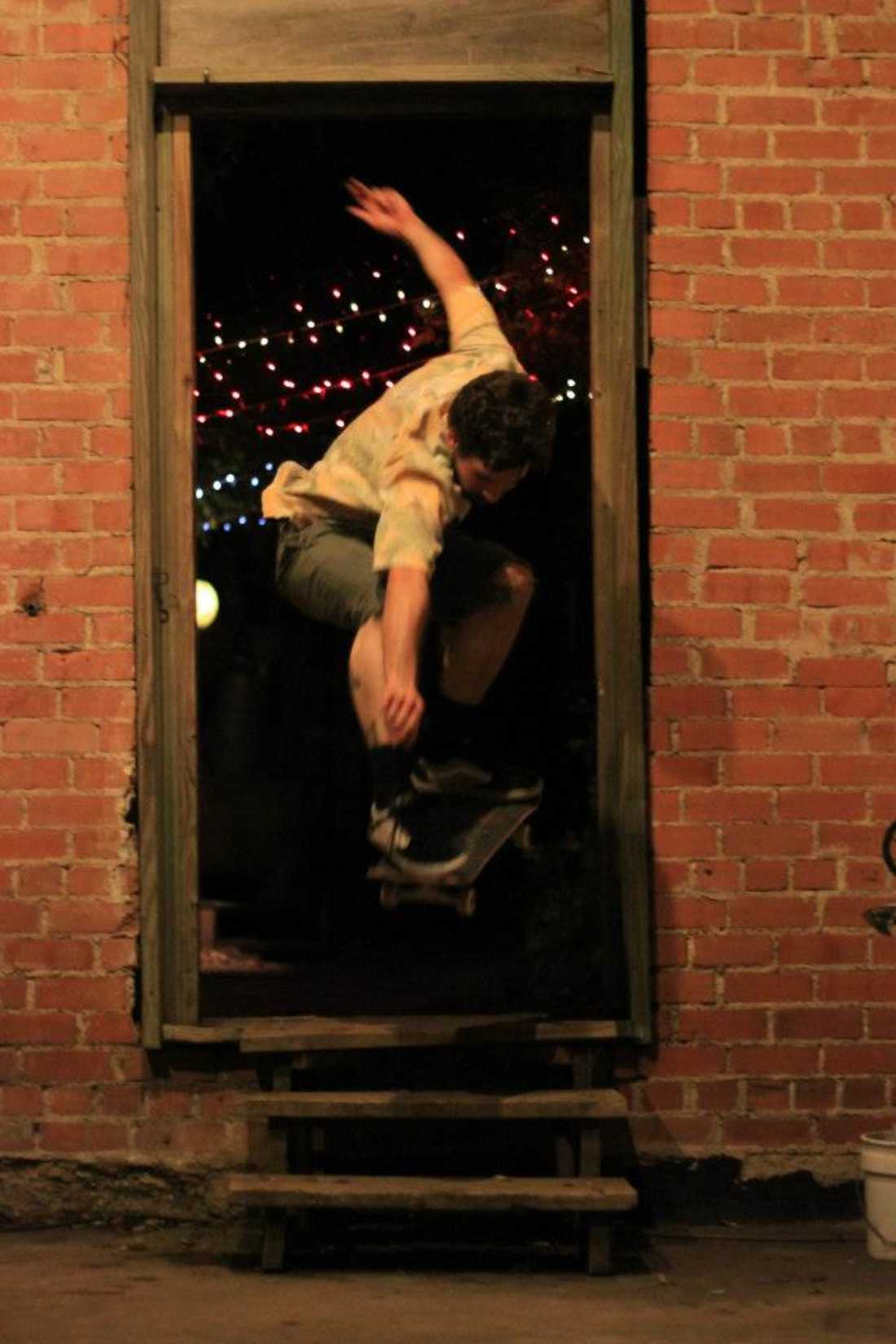 I remember one time at The Where House when I watched a dude drop in on a quarter pipe from the catwalk adjoining the walls of the back patio. We all watched him climb up there, line his skateboard up, and step into empty space, plummeting into the ramp and skating across the concrete to the sound of massed cheers and raucous applause. I think the skater’s journey from second floor to ground took an entire second, but waiting for him to eat it felt like an eternity, ample time to wonder what would happen if he busted his ass.

For the past five years, Casey Smith’s Hemphill Street venue/art space/grown-up clubhouse has been the epicenter of a scene-within-a-scene, where the latest entrants to Fort Worth music have cut their teeth as fans and as bands. From impromptu cookout/movie nights to regular open-mics –– and to the occasional concert by a massive touring act like Acid Mothers Temple, Stardeath & White Dwarfs, and The Queers –– The Where House’s whatever-you-need-it-to-be philosophy has been an integral component of the Fort Worth music scene’s expansion over the past few years. Besides offering a place for bands of all statures to play, it’s also helped to cultivate a fan community that keeps a music scene alive. If you’ve ever seen a Dreamy Soundz Records or Lo-Life Recordings band, for example, chances are you saw them at The Where House. Sometimes it seems like those fans are mostly dudes in bands watching other dudes in bands, but whatever. The more the merrier, right?

Yet even as the shows got bigger and bigger, and even as the space evolved from sketchy BYOB party planet to (ostensibly) legitimate and legal bar, there’s always been a nagging thought in the back of my mind, a pessimistic voice whispering, “This won’t last forever, you know?” And, indeed, on Christmas Day, Casey Smith announced that his club’s annual New Year’s Eve bash would be his last, due to the landlord’s refusal to sell Smith the building and his desire to, um, live there.

The Where House isn’t totally done yet –– there are shows booked through March –– but just know that you don’t have that many more opportunities to drop by and soak up some more good times before the doors are locked for good. Bring your skateboards. –– Steve Steward

Why does this seem weird? In a good way, yes, but weird nonetheless? The Pour House is a wonderful drinking and dining establishment. And The Hardline is the most listened-to sports talk radio show in North Texas, whose co-hosts Corby Davidson and Mike Rhyner often broadcast from area watering holes. Yet the fact that Corby, Mike, and the rest of the gang will alight from their cozy Dallas perch to chatter in little ol’ Fort Worth on Friday has the aura of a papal visit.

I haven’t listened to every Hardline show, but I’ve never heard the guys do their thing from Fort Worth. (I’m sure they have. I just can’t remember readily.) It’s not surprising –– the worlds of professional and, to a lesser degree, collegiate sports in this part of the state revolve around Big D. I’m still pretty psyched, though.

Do I agree with everything Davidson and Rhyner say? Of course not. Agreement isn’t the point. In fact, neither are educated opinions and well-reasoned arguments. Entertainment is, and the chemistry between Davidson and Rhyner and among Davidson, Rhyner, Danny Balis, and the rest of the production crew makes for pure radio gold. The guys on ESPN and The Fan theoretically might be more informed (they’re not) and less annoying (even more not; looking at you, Ben & Skin), but they are also utterly vanilla. There’s just something about Davidson’s nasal abrasiveness, jumping-out-of-his-seat eagerness, and know-it-all ’tude mixed with The Old Gray Wolf’s unimpressed disposition and quixotic pining for some semblance of seriousness, all mixed up with Balis’ homespun sharpshooting, that can’t be duplicated –– and when one of them is out, the show becomes only a fraction of itself.

I know The Hardline has won some Marconi Radio Awards over the years and deservedly so. These guys could be talking about algebra and it’d still be interesting. And while I won’t be able to make the Pour House remote, I know a lot of folks who will. The show is simply that good. Just don’t feel obligated to kiss Davidson’s TCU ring when he extends his hand. –– Anthony Mariani