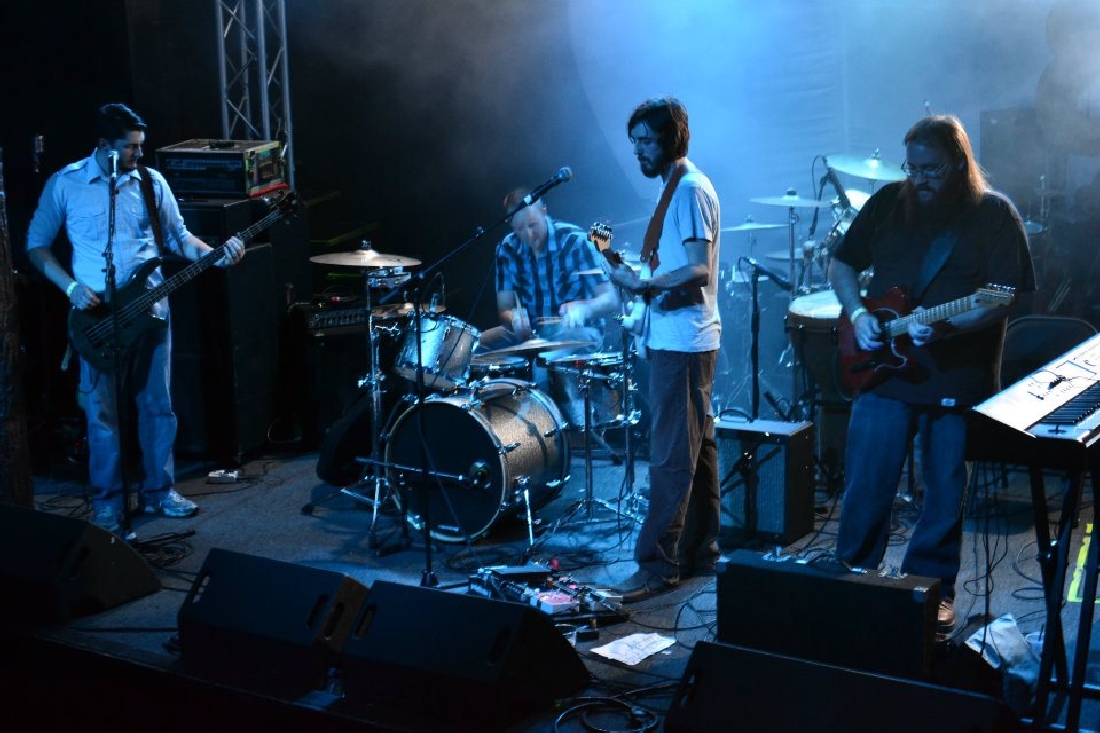 Specializing in a brand of throwback psychedelic-Americana (imagine: Big Star meets Moby Grape), SGC has been around for nearly a decade, putting on some transportive shows across North Texas and putting out some spellbinding, completely outré recordings, now including Electric Neck and the Mercy Skull.

Though spanning the entire length of SGC’s existence, the new 18-track album isn’t a greatest-hits collection. It’s more like a gathering of band-defining B-sides. And it isn’t just song-song-song. Like a piece of No Wave cinema (or a traditional album), Electric Neck and the Mercy Skull flows. Full of interludes and long songs, it resembles an extended suite or maybe even a rock symphony, with multiple changes in key and tempo throughout but rarely any straying from a narcotizing, dreamy vibe.

“You know that feeling you get when you hear a track from Dark Side of the Moon on the radio and the fadeout is cut off by Steve Miller or some shit that really fucks up the mood?” Hance said. “I consider that a good thing. You can tell [the Pink Floyd track] is part of something bigger. It makes you want to go home and listen to the whole thing.”

Recorded piecemeal over the past couple of years at Hance’s home studio, Electric Neck and the Mercy Skull is as fresh as 2013 and as vintage as 2005, when Hance first got his hands on recording equipment and began laying down tracks in private. Within a few months, he had amassed so many “demos,” as he calls them, that he felt a title was necessary. “I called it Electric Neck and basically only showed my close family and friends,” he said. “There was no SGC then, so it kind of just gathered dust.”

Around 2007, Hance, who had been playing in other groups that kept dissolving, corralled some future SGC members to help him record one Electric Neck track, “Power Mouth.” After that, he wrote a bunch of songs “really fast” and recorded them while recruiting more musicians for the project that would become Secret Ghost Champion. The band began performing the fruits of his labors, collectively titled Mercy Skull. (There was a woman named Mercy Scul at the church that Hance and his brother attended as children –– “I always thought that was a badass name,” Hance said.) The goal was to commit the tracks to tape, but Psychosomatic Immortality happened. That was a newer collection of songs that Hance said “had to be done” (“Secret Ghost Champion Wins,” Oct. 26, 2011).

Not long after that album came out, Hance and company returned their attention to Mercy Skull. They recorded a few of the songs but ended up shelving them to pursue other projects –– some of the SGC guys also perform in Igneous Grimm, and Hance is in Madras and Fou. Though spread out, Hance at one point reacquainted himself with Mercy Skull. “I would feel really inspired to write new songs that resembled those older ones,” he said. “I was enjoying a lot of songs I had kind of forgotten about, so I then realized that I loved Electric Neck too, and it would be a shame to never share those songs. Every time I listened to it, I would want to write more songs like those.”

The band decided to record tunes from Electric Neck and Mercy Skull and some new material inspired by both. The location was once again Hance’s home studio. “It was a truly magical and spiritual experience for me when I realized that I could imagine a song, set up some gear, perform it, mix it down, make a CD, paint the artwork for it, and have a complete and untainted work of art,” he said. “Whether people like the sounds or not, it is pure, and the vision is unchanged. … Plus, we don’t have to pay for time in a studio.”

The Secret Ghost Champion sound is still the Secret Ghost Champion sound. And will most likely remain the band’s sound in perpetuity. Hance’s voice is still sweet and soft, Scot’s playing is still dynamic and his tone still biting, and the melodies are still mostly legato, subtle, and mournful. But Electric Neck and the Mercy Skull is far from a letdown. The album is a triumph, an epic poem written in stardust (or DayGlo-spiked bong water). Indeed prone to slow tempos, the band still rocks. The denouement to the otherwise swaying “Healer” is massive, metallic, and about two minutes long or half the length of the entire song. “Fin and Flame” and “A Child’s Crusade” stomp and honk (and include handclaps), and the brief “Power-Up!!!” is almost heavy metal. The song essentially consists of the lyrics “Power up / If you want to live / You’ve got to power up / Rise from your grave” sung through a talk-box attached to a guitar. (Inspired by the Sega game Altered Beast, the song made it onto the album for having a “certain magic,” Hance said, “and it always made us laugh.” Hance said he never used a talk-box until a former bandmate left one at his house after practice years ago. “Talk-box is under-utilized,” he said. “Pink Floyd’s Animals had some amazing tones in the guitars because of one. I think it should make a comeback.”)

Equally important to that Secret Ghost Champion sound are the trippy-dippy lyrics. Long story short: Turn on, tune in, and drop out. As chief lyricist, Hance is apt to drop a juvenile clunker here and there (“Everyone is strange when dining with reptilians,” “Rise, Atlantis, and feed upon the ashes of your mind,” “Dream on ’til the gnasher”), but he never sacrifices a truly evocative, loaded image for coarse literal meaning. On the flowing “Granfaloon,” he succinctly and ingeniously juxtaposes visual ideas of violence and joviality, royalty and servility, simplicity and grandiosity: “The white noise of a million rifles laughing / And all the red statues they spend their time crafting … Applying new jewels to the throne beneath the pavement / And one minor chord to speak to your savior.”

He’s also good when he’s direct, expressing a concrete point of view without sounding didactic. Exhibit A is “Life Like a Slave”: “Everyone prays when they need a new thing / And everyone hates you when you’re in their way.”

Hance recognizes Secret Ghost Champion’s weirdness, admitting that he doesn’t really know where his band fits into the musical landscape, either locally or internationally. “We probably fit in somewhere in the past, I’m afraid,” he said. “Or somewhere with a lot of reefer.”

Secret Ghost Champion is planning to tour Texas and “select U.S. cities,” Hance said, in support of the new album. Hance and company also are planning on doing more recording, this time on a vintage tape machine they recently bought. They’ll also likely enlist the help of Nathan Brown, the Fort Worth singer-songwriter who also owns and operates The Dead Media, a vintage recording/producing enterprise.

Secret Ghost Champion’s long-term goal is simple. “We just want to share our love and art with the world,” Hance said. “For most of us, music is our life. Whoever out there that would enjoy SGC, I hope they will.”