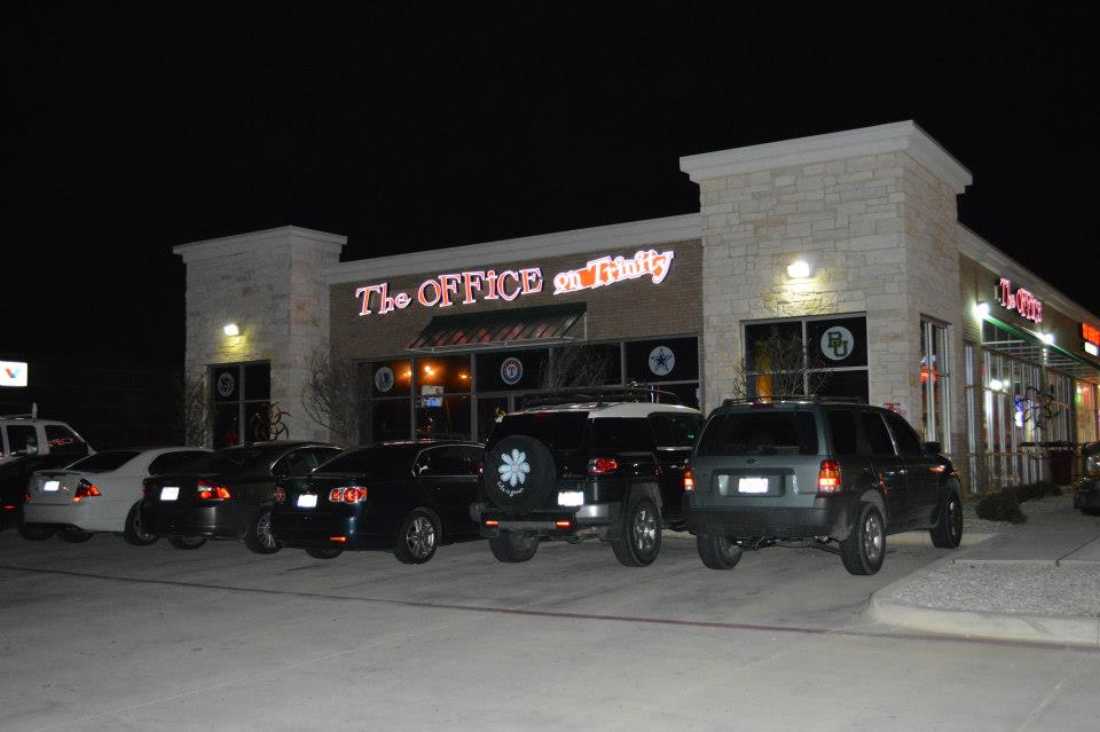 I’d meant to write about The Office in Euless last week, after I’d dropped in on a Monday evening on my way home from Carrollton. But later, about halfway through writing my first draft, I saw on the bar’s Facebook page that on the next day (Tuesday), there would be a bikini contest from 9 to 11 p.m. “Probably better go to that,” I said and tabled The Office for the following week.

I don’t know what I was thinking. The last time I wrote about one of these things was three years ago, after I’d gone to a Monday night bikini contest at Overtime Bar & Grill. I perused that column before I started this one, and re-reading it made me realize two things: I fucking hate the word “lass,” and bikini contests are actually kind of terrible. This is not to say I don’t appreciate T and A, but I’d rather appreciate them from under the cover of sunglasses and across the distance of a hotel pool. I argue that the (probably not) surreptitious cross-pool ogle is way less creepy than showing up to a sports bar with a bunch of other dudes to clap at boobs and gnaw on chicken fingers. I mean, why not just go to a strip club? Nothing’s creepy there, and the food is free after 2 a.m.

How do you even report on a bikini contest? As a competition, they’re entirely subjective, which is mostly fine in a sport like surfing, because surfing still requires competitors to be able to, you know, surf. What is there to a bikini contest but physical appearance? I have the sneaking suspicion that no amount of precision twerking or flawless hula hooping will overcome the advantage held by the prettiest, chestiest contestant, who, by virtue of applause volume, will walk home at the end of the night with multiple $100 bills. To me, that’s when bikini wearing becomes objectification — that one woman will win the most money because a crowd of guys judged her better-looking than her peers. If bikini babes received equal pay to parade around a bunch of cocktail tables (like at a breastaurant, though “equal” in this case really only means $2.13 an hour), that wouldn’t bother me at all. But throw in a cash prize based on being a crowd favorite, and that’s where it gets kind of gross for me.

At The Office, the cash prize was $500, with each contestant receiving $25 for her time, regardless of where she placed. Perhaps that’s usually the case at bikini contests, and at that point, I wasn’t really that put off by the whole concept. Of course the mood in the room crackled with the low-level charge of gleeful anticipation, and as I sidled into a seat at the bar, I identified several would-be contestants by the telltale strings poking out from under their collars and tank tops. All of the women appeared enthusiastic. And in my head, I started to compose a column, mentally commenting on the Texas-centric sports logos beneath The Office’s lacquered bar top, musing on the people on the patio completely focused on Giant Jenga, and making jokes about a dress code posted by the front door that prohibited wearing wife-beaters vis a vis the three dudes by the dartboards wearing wife-beaters. But when I came to the part where I was supposed to write about bikinis, I stopped. Who the hell am I to wax philosophic on how some woman looks when she is semi-nude in public? Isn’t that part of what’s wrong with the world, that certain aspects of “bestness” make a lot of people unhappy?

But then it turned out that the contest was a no-go, much to the annoyance of the women who’d showed up for the chance to claim victory and five hundred bucks. In several cases, a $25 bar tab didn’t seem to be great consolation, especially when they expected to get cash. I left immediately after the announcement. The Office was nice enough, and I wouldn’t mind dropping in the next time I find myself cruising around Euless. Maybe I’ll stop by Baby Dolls on the way home. At least there, everyone who takes off her clothes is a winner. –– Steve Steward