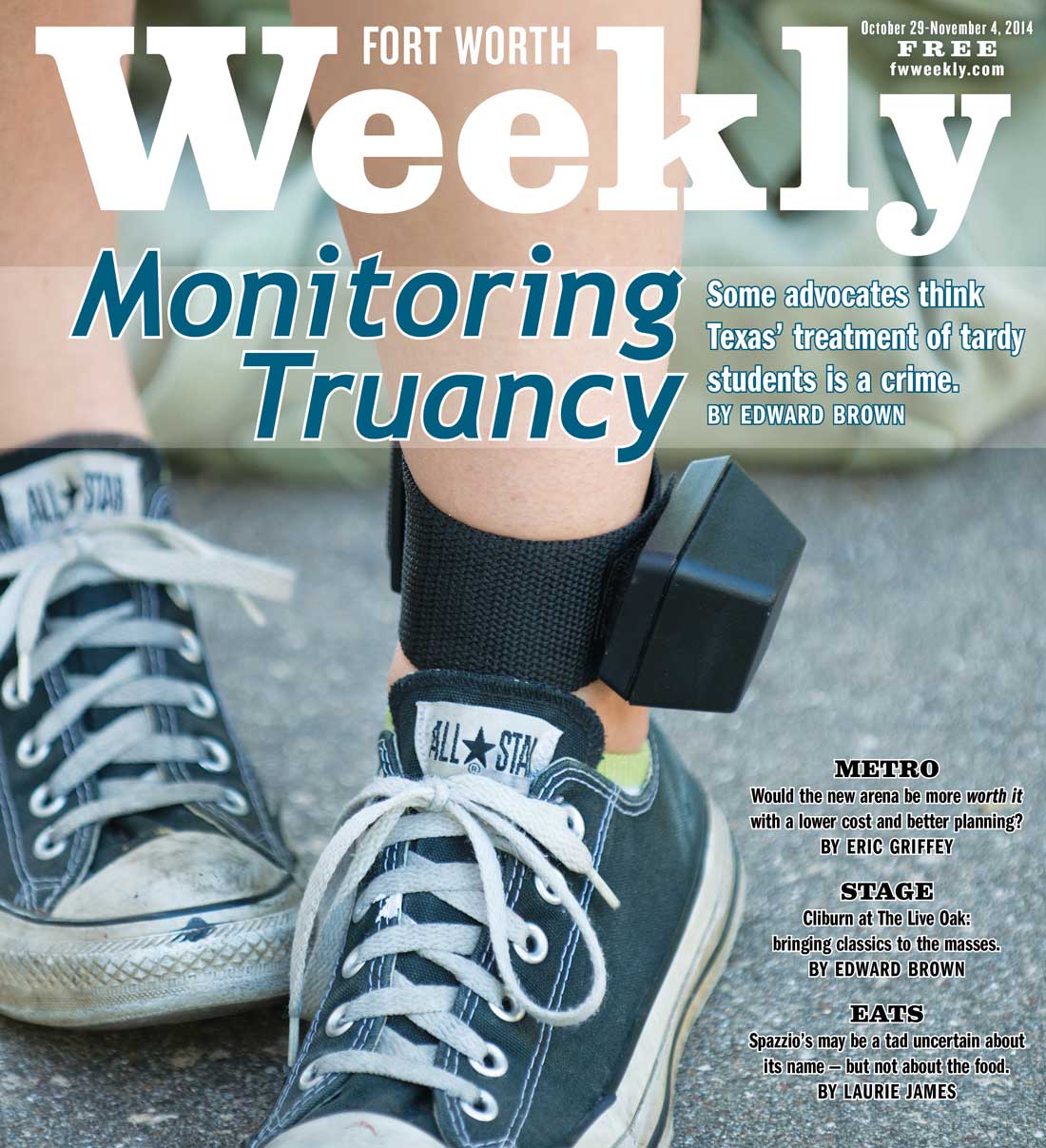 Last spring at a truancy court appearance in front of Johnson County Justice of the Peace Pat Jacobs, a 17-year-old high school student who routinely skipped her last class of the day was ordered to wear an ankle monitor to convince her to take the issue seriously. When the young woman’s mother objected, she was ordered to attend her daughter’s last class every day for the remaining several weeks of the school year.

Jacobs isn’t the only Johnson County JP who orders ankle monitors for students. In Burleson, Judge Jeff Monk has a high school senior wearing one right now. He ordered another student to report to court at the end of each school day.

“And he’s 17,” Monk said of the second student, “so if he fails, he’s ignoring a court order and could wind up in jail.”

Neither Jacobs nor Monk thinks it unreasonable to order kids to wear ankle monitors, force parents to attend classes, or make kids come to court after school. The judges see those remedies as last-ditch efforts to make students understand that truancy is a serious issue with serious consequences.

“By the time I’m strapping an ankle monitor on a kid, it’s because that student is a serious repeat truancy offender,” Monk said. “And the kids who cut those monitors off, well, they are the ones who will wind up behind bars for other criminal infractions.”

Truancy in Texas is a hot-button issue. Texas routinely sends more than 100,000 kids to court for truancy each year. That’s about double the truancy court cases of all the other states combined (“Late to Class? Off to Court,” Jan 22, 2014).

The situation was brought to public attention last year after a nonprofit group called Texas Appleseed reported on the connection between criminal truancy charges being brought against children as young as 12 and those students’ later involvement in the criminal justice system.

Their report, called “The School-to-Prison Pipeline,” generated national press coverage. It described how Texas school kids between 12 and 17 are routinely being charged with Class C misdemeanors for skipping school and, in many cases, having serious fines levied against them and their parents.

Defenders of the policy say having that hammer — of potential criminal charges — in the educational tool kit helps kids realize the seriousness of truancy.

Opponents say that kind of “tough love” causes more injury than good. They argue that a criminal charge, even a misdemeanor, on children’s records will follow them their whole lives, preventing them from getting certain jobs or being accepted at certain colleges or even getting into the military.

The opponents say statistics show that the overwhelming number of Texas students charged with such misdemeanors are from poor families for whom fines are a serious burden that, in some cases, drives parents to take their kids out of school. In poor families, they say, kids often have no control over whether they can get to school on time.

The argument between those two camps led to a hearing by the Texas Senate Committee on Jurisprudence last week on whether truancy should remain a criminal offense or be made a civil offense.

Emotions on both sides run high.

“It’s a system that is designed for the benefit of the bureaucracy that runs it, not to help kids do better at school,” said Michael Harris, a senior attorney at the National Center for Youth Law in Austin. And State Sen. John Whitmire of Houston told Fort Worth Weekly that the first bill he will introduce when the Texas Legislature convenes in January will be a proposal to take truancy out of the criminal courts.

But James Henry, a juvenile justice case manager in Midland County, who spoke at the hearing, maintains that truancy is a “gateway crime” that belongs in criminal court.  “Kids who are skipping school are out there committing crimes on the street,” he said.

Monk sees truancy court as a chance for kids to turn their lives around. “I tell them that this is their first trip to court, and it should be their last.”