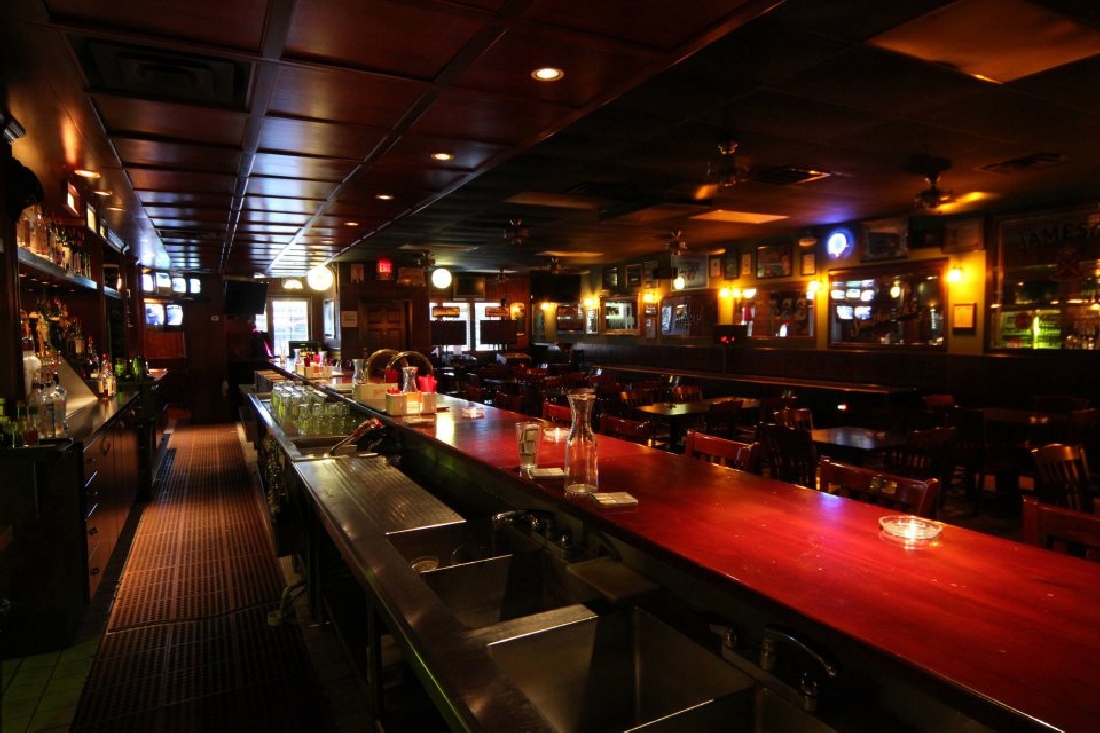 In my humble estimation, Irish pubs are a default kind of bar. They’re cozy, with lots of warm lighting and dark wood, and emphasize brown liquors, darts, and billiards. I’ve never been across the Atlantic, so I have no idea if the American idea of an Irish pub is accurate. Ultimately, I don’t really care –– unless I hear a real Irish accent coming from behind the bar, it makes no difference what the name is as long as the service is as smooth as the head on a perfectly poured Guinness. This is a long way of saying that I don’t know why The Abbey Pub is called The Abbey Pub, but I’m happy to drink there.

The Abbey, as you may or may not be old enough to remember, used to be Poag Mahone’s before Poag’s moved around the corner. And before that, it was The Shamrock Pub, whose owner, bar-biz vet Matt McEntire, also owns the building, the spacious parking lot out back, and the building that houses Poag’s II, Wired Willy’s, and Mad Hatter. McEntire is also a bona fide Irishman (hometown, Longford), funny accent and all. Not long after all of the switching and changing started on that corner, I stopped thinking of Poag’s as an Irish bar, despite the Gaelic name and the cheeky leprechaun on the front window. It’s just a nice place that one of my friends co-owns and where one time I watched a drunk woman, against the advice of everyone around her, stand on a chair and pump her fist to a Nickelback song.

As for the Abbey, when I went there on Saturday night, I probably could’ve just asked an employee about the name, but I was in one of those moods where extended conversation sounded about as fun as a school report on the potato famine. I was also intently pre-gaming prior to the Pinkish Black show at nearby Lola’s Saloon, and I had other things on my mind, namely figuring out whether two Taco Bueno Party Burritos were enough padding for three shots and a beer. The answer, it turns out, is yes but only if you err on the side of Whataburger on the way home.

In any case, I eventually found a spot at the bar where I could idly stare at college basketball on the TVs overhead. I couldn’t focus on the games, but the Abbey’s crowd was fun to watch. I was sort of surprised that the place wasn’t overrun with a stampede of stock show visitors, though I ran into a beer rep friend who had been schmoozing clients and smoothing over hassles over at Will Rogers since about 8 in the morning. She looked as though she’d had enough of the Stetson set for one day, if the extra shot in her hand was any indication.

On a trip to the bathroom, I ran into some other friends playing darts. I’m not much for darts myself, but I’ve always dug how the Abbey’s dart area is separated from the rest of the room by a low wall. I assume it makes the game safer for other patrons, but I really appreciate it for the aesthetics — it and the pool table on the opposite wall make for a definite gaming section that breaks up what would otherwise be just a big room with a bar and tables.

Speaking of tables, the Abbey has this four-player Pac-Man game/cocktail table that I’d never seen before. I didn’t get to play it, but it appears to be designed for social interaction, as opposed to playing Pac-Man (or whatever it is you do) on a smartphone. The Abbey also has lots of regular tables, if you prefer yours without joysticks and coin slots.

Another thing I noticed: By and large, the folks at the Abbey weren’t sitting there poking at their Androids and iPhones. They were actually interacting with one another via spoken language and eye contact, which is largely why I went back to the bar, posted an Instagram, and left. –– Steve Steward