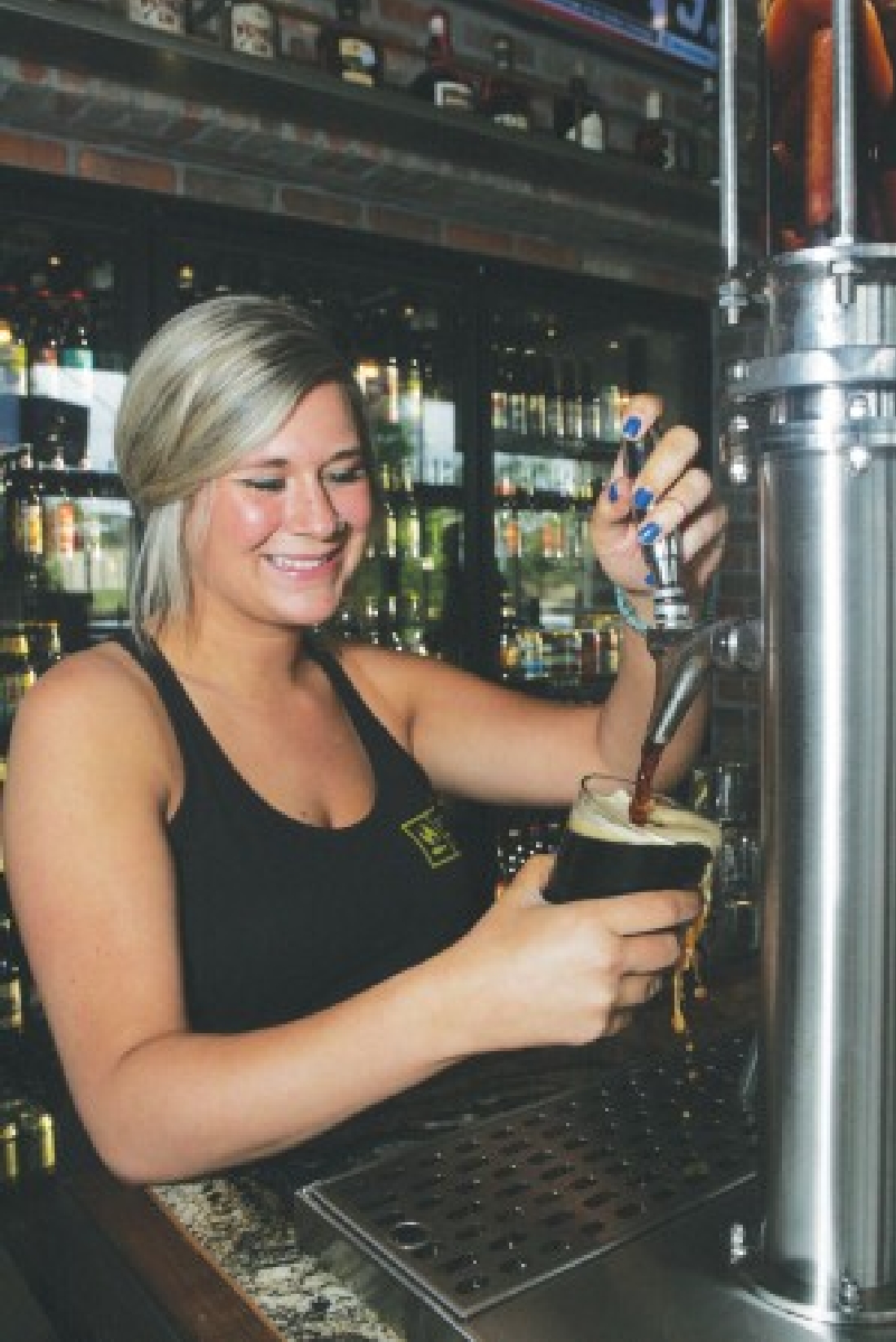 Despite what some say, I don’t believe having a weekday afternoon cocktail is the sign of a problem. It’s how I reclaim the lunches I have eaten at my desk or happy hours I have spent networking when I would prefer to be not working. And that is how I justify my stop at World of Beer (3252 W.7th Street) at 2 p.m. on a Thursday.

At first I am alone on the patio accompanied only by the sounds of passing cars and the nearby water fountain that is making my bladder regret the pint of water I had just downed. I am not, however regretting the Firestone Walker Easy Jack IPA ($6.50) that is perfectly crisp, smooth, and lightly hopped. I do start to ponder if I will need to pack up my laptop and purse just for a quick restroom run. Maybe I could ask my server to keep an eye on my laptop? It’s pretty dead here so she probably wouldn’t mind. Thinking back to my days waiting tables, I am annoyed by my own assumption and decide I can hold it.

The silence ends after just a few minutes when I hear a group of basic TCU students who “LITERALLY CAN’T EVEN” before I literally can even see them. The group of four early twenty-something girls dressed identically in oversized TCU sorority t-shirts, jogging shorts, and their hair bunched into messy buns take the table two over from me. I settle in, eager for some quality eavesdropping.

The server approaches right away and the awkward silences ensue when the gals can’t decide what to order off of the extensive list of taps. They timidly explain that they like light beer like Shiner and Fireman’s 4, and prefer drafts over bottles. It might be their first time in this world (of beer) away from the Horned Frog world, so they clearly need some craft guidance.

I find myself feeling surprisingly proud of these young women for their lack of makeup and for their polite conversation with the 25-year-old server (who calls them honey), telling her she rocks for offering them samples. Good for them for not giving a damn how they look and not giving arrogant attitude to the server of the same age who was bringing them drinks. They are trying new beers rather than sampling wine, relaxing instead of competing, and are definitely exceeding my TCU-y expectations earned from experience.

The street traffic has gotten busier and it seems that the water fountains are getting louder (and my bladder fuller), so it has become more difficult to decipher their conversation. From what I can tell the table’s activity was mostly limited to silent phone checking sessions with occasional chatter on topics like bowling and wondering what this bar is like on the weekend. I was hoping for, and admittedly expecting, some gossip and condescending commentary.

The only point where I desperately want to roll my eyes is when they feign surprise at being carded, but agree that they are SO glad they look under 30. I wonder how many times I said something like that with an insecure 34-year-old nearby. My mind wanders to my days in college and what I would have been doing differently. Most likely, I would have been the one serving the drinks. And if I weren’t working, I would have certainly had some sort of dumb shot along with a bucket of whatever crappy beer was half-priced. Also, the bar would have been packed nuts to butts on a sunny 80-degree Thursday after being shut in all winter at my Midwestern university.

The daydream ends and it’s back to 2015 in Texas, where my server did not card me because I am clearly over 30. I accept this fact with the justification that it’s probably because I confidently ordered a low ABV IPA as I worked from my laptop. I am certain it’s not my forehead wrinkles –– it’s definitely my solo beer drinking/ professional appearance. I’m feeling good again, thanks to my own validation and a bit of liquid confidence.

The beers at the sorority table seem to have taken effect too, as I notice their conversation is becoming more enthusiastic. A flight has been ordered, and one of them is educating the others on Yuengling, “the oldest brewery in America.” Phone calls, texts, and their discussion moves in the direction of happy hour planning, and now I am finding myself envious, as it is time for me to go back to work.

A group of two women in their mid-thirties have now taken the table between me and my Chi Os, so it’s time to get the check, collect my belongings, and definitely pee before I leave. I am pretty sure these two ladies aren’t that interesting anyway.