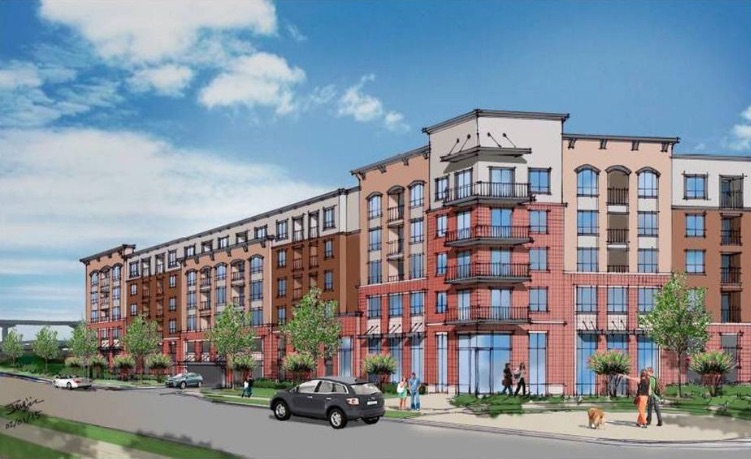 The photo I’ve attached to this blog post is a large apartment building with a style so ubiquitous that it even has its own name: the “Dallas Donut.” A ring of residences with an appealing exterior hides a concrete dead zone of a parking garage. This building is being built in Fort Worth, or maybe Dallas, or Austin, or Houston, or Kansas City, or Los Angeles or Omaha or Salt Lake City, or Atlanta.

These buildings serve a need, getting more people living in the central city, but it’s hard not to notice that they’ve all fallen into the same basic design. They’re giant-sized monolithic single-block constructions (with names like “The Kestmere at Jennings Station”) trying to have the feel of a more varied urban street, by breaking up their facades with a series of different colors and facade materials. At best, they’re inoffensive; at worst, they’re a confused jumble.

Breaking up a long stretch of buildings is a good goal –– pedestrians don’t tend to enjoy long, unbroken swaths of sameness –– but a lot of these structures wind up looking busy and awkward. What’s worse, the aggressively varied facades are often also a cover for these buildings taking over what used to be smaller city blocks and combining them into larger blocks, which can often be actively harmful to neighborhoods.

A good urban place is built on its street grid, and a healthy street grid is one of frequent connections, multiple routes, and short walks between cross streets. In such an environment, people are more encouraged to walk, since their routes can vary frequently; what’s more, buildings in these settings don’t have to work so hard at being “interesting,” because with greater numbers of smaller blocks comes greater variety in buildings.

Interrupting the frequent connections of an urban street grid discourages people from walking, which undoes everything that brings them to such a neighborhood in the first place. Far too many infill apartments do just that, though, and try to inject variety back into the streetscape with the aforementioned jumble of facades.

A lot of this ties into the objects these large apartment blocks are concealing: their parking garages. It’s hard to make a small parking garage, so giving themselves plenty of room to build a standard-sized garage makes things easier –– and cheaper –– for developers. If bike and public transit infrastructure is lacking, developers will build a large parking supply, and we’re back to large block after large block of giant apartment structures with busy facades.

It’ll take time to change the public transportation problem, but in the meantime, it would be nice if developers would try thinking a bit more outside of the box and make their buildings more coherent while they’re making them interesting.