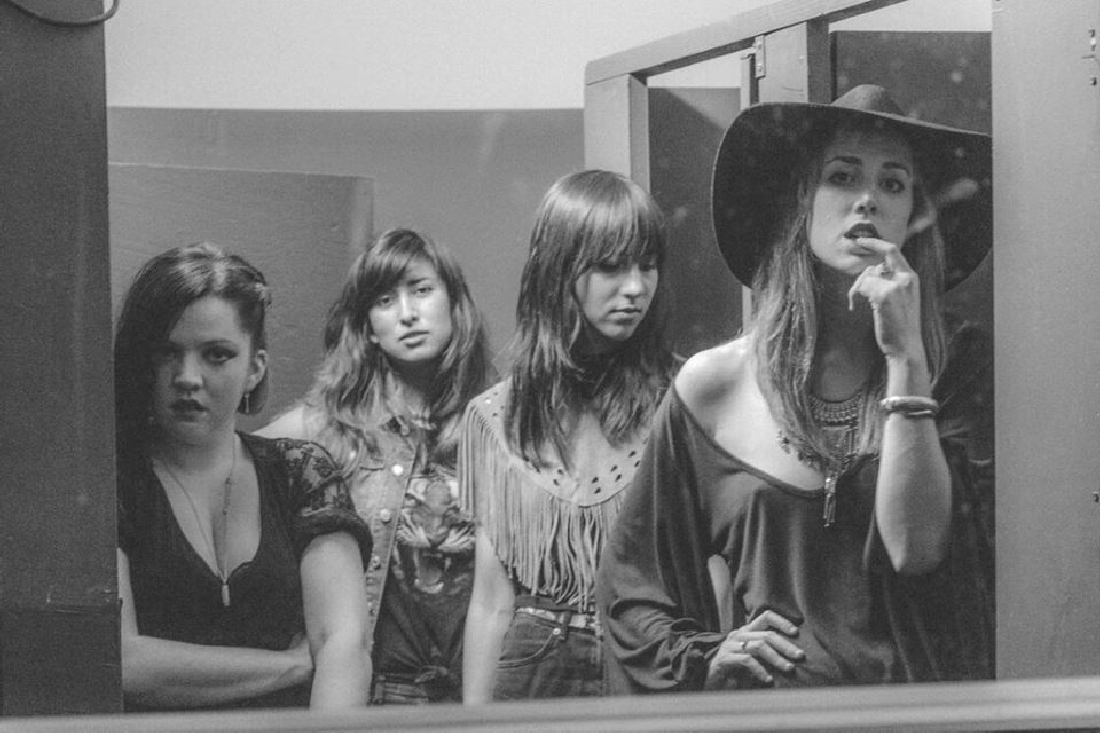 1) If Kenner (well, Hasbro now) made a toy line around the idea of “ultra ’70s throwback psychedelic band” it would look (and sound, because the line would probably include short comic books packaged with 7” singles) like Black Pussy, what with their bell bottoms, bong rip samples, ornamental full-stacks and corny Hammond organ. Black Pussy’s music is maximum ’70s rock ’n roll hippie fantasy – they’re even touring an EP right now that has a cover of “Don’t Fear the Reaper” on it, for Chrissakes. If the band were a Transformer, it would turn into a conversion van painted with Cheech Wizard making love to the Farrah Fawcett swimsuit poster. Black Pussy is to vintage stoner rock what Leon Bridges is to vintage soul; if I’m being honest, I’d probably rather see Leon Bridges.

That said, Black Pussy isn’t not entertaining; the band is tight and the riffs are mighty, and if you don’t dig them that much, at least they’re great background music if you’re drunk and blazed and trying to get laid. On a side-note, I wonder if there is a parallel universe that includes a band that’s essentially the female analog to Black Pussy – almost exactly the same sound, same carefully curated vintage style, same devotion to weed, but with women in it, and also, the name is Black Cock. Why doesn’t that band happen in this universe? Oh well. For now, we’ll just have to make do with the throwback stoner rock bands we already have. Luckily, the Black Pussy show on Thursday at Lola’s has some great openers; along with them are another Portland band, Ape Machine, themselves rooted heavily in throwback heavy rock archetypes, but who aren’t quite so era-derivative. Before them, catch local cinematic doom duo Mountain of Smoke, and Cosmic Trigger’s spacey metal shredding.

I dunno… the song in this “groovy, man”-type video sounds less-reductive than my description above. Maybe I’ve got them all wrong:

2) They may not be the exact female analog to Black Pussy, but Classic Cult is a rock band from Dallas crewed entirely by women. Here’s a description from Centraltrack.com profile of their debut show tonight at Club Dada tonight, opening for Ronnie Heart and Zhora:

“Written and directed by Whiskey Folk Ramblers’ Tyler Rougeux is Classic Cult, a new league of dirty Dallas rock ‘n’ roll playing its first-ever show tonight. The group is full of faces familiar to the scene, including ex-Spookeasy frontwoman Stephanie Burns on bass, Aurora DeWilde on guitar and the ever theatrical Miller Pyke fronting. It’s a hell of a first show, too, as Zhora and Ronnie Heart are also on this bill. From what we hear, everyone in town is planning on attending this one.”

Dallas residents: if you have tried and failed to understand why a lot of people from Fort Worth have chips on their shoulders about your city, the paragraph above is about as good a clue as you could want. Now, I think Dallas is great, but let me break that paragraph down a bit: I’m all for female rock bands that crank up the amps and the sex and everything else Classic Cult’s social media presence suggests they are about, but the hype over this band… geez Louise! Here is a new band, made of hot babes, (who possess faces that are “familiar to the scene” including a lead singer described as “ever theatrical”), that has never played a show, nor has any music available, but has already had several photoshoots (here’s their Instagram). Also, it’s “written and directed” by someone else. DOESN’T THAT SOUND LIKE THE FAKEST, MOST DALLAS SHIT EVER?!?

I’m not trying to be a dick; I know a couple of the women in this band, and they are both more than competent at making and performing music; moreover, I am genuinely curious to know if Classic Cult is any good. But other than the visual evidence, I have no way to evaluate them. They look like a cool band, I guess, and the back story suggests a sort of Runaways situation, except the Runaways were teenage girls, not women in their 20s. And yet, here I am, contributing to the hype. The show starts at 8pm.

3) Got a question for 1919 Hemphill peeps – am I allowed to promote your shows in the weekly Top 5? I’m sure you’ll let me know one way or another, but in the meantime, here are the facts as presented on Facebook about the all-ages DIY community space’s show on Friday:

I’d assume, based on general conventions of show-booking and flyer construction that the lineup is listed in order of last to first, but just to be on the safe side, get there at 7, and drop some extra bucks in whatever jar is going around for Not Half Bad’s gas fund. For more information about 1919 Hemphill, consult www.1919hemphill.org or watch this video:

4) The first time I saw a show at Tomcats West, I likened it to a sort of west-side Moon Bar, though seeing as how the Moon Bar is four years gone, that might not mean much to a lot of people who never went there. But anyway, Tomcats West has really good sound and it’s a pretty cool vibe, and if you go to the nearby Star Lite Lounge for a drink before or after, you’ll probably meet some interesting characters. But as for the show at Tomcats on Friday night, it’s a brutal (in the awesome sense of the word) lineup of thrash, grind, death, and crust – in my opinion, Rapid Face, Tolar and Baring Teeth are the main draws, but that’s only because, other than some quick listens on a laptop, I’m largely unfamiliar with the rest of the bill. Nevertheless, from headliner to opening act, the lineup is: Rapid Face, Tolar, Kaliya, A Devil’s Daydream, and Mouth Breather, with Baring Teeth in the lead-off spot. If you’ve never been to Tomcats, this is a great reason to go.

5) Gotta hand it to KXT – I like this commercial:

Saturday’s main event is the KXT Summer Cut concert at the Southside Ballroom. You’ve probably heard the radio commercials or seen a Facebook ad for it, in which case you know Belle and Sebastian are the headliners. I haven’t really listened to that band since Fold Your Hands Child, You Walk Like a Peasant, but that disco-sounding song of theirs playing in the radio spot makes me think I’ve missed out on some cool stuff. Anyway: KXT Summercut, featuring Belle and Sebastian, Sarah Jaffe, Israel Nash, Fantastic Negrito, Doug Burr, Repel the Robot, Jessie Frye, Calhoun, and Catamaran. Of the locals here, I really dig Catamaran. Doors are at 5pm, and Jessie Frye starts the show at 5:15.