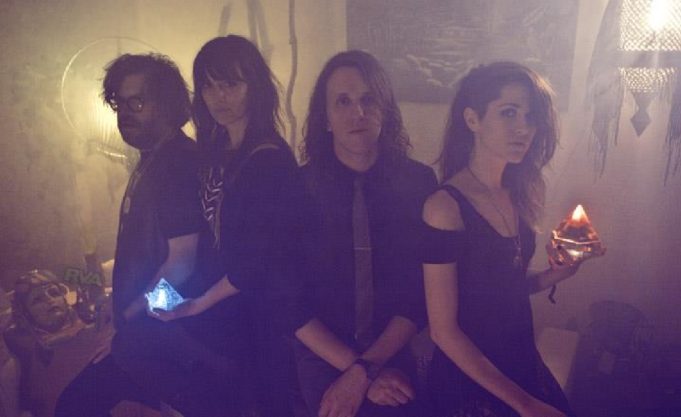 1) This video is not at all what Austin’s The Diamond Center sounds like, but it’s what I think of when I read their name on the flyer, because The Diamond Center (locations throughout the Bay Area) were among my favorite locally made commercials growing up:

Side note: I’ve always thought that Paul from The Diamond Center looks like a combo of Ron Jeremy and NOFX’s Fat Mike.

Anyway, Lola’s has the Diamond Center (the band, not the gem store) headlining on Friday night, and when I listen to their moody, slow-burning, reverb-misty jams unspooling out of my headphones, the effect is practically cinematic. They immediately remind me of Warpaint, and to a lesser extent, La Luz. In fact, those three bands would make for an excellent bill! Do with that what thou wilt; hopefully thou goest to the show, which also features Richmond, VA’s garage-psych power trio Lady God, and Fairmount neighborhood space robot electro duo Starbass.

2) This is not the Blackstone Rangers (nor is it Pale Dian):

Got an opinion about Blackstone Rangers? That’s kind of a trick question, because Blackstone Rangers are now called Pale Dian. If I recall correctly, “Dian” is pronounced like “Diane,” aka Shelley Long’s character from Cheers. Ever wonder why Shelley Long quit the show? Here’s a video where she explains it to Phil Donahue in 1987:

You can find out why the band changed its name, along with other interesting revelations in this Central Track interview from July, though I think the sound still circles near “electro-pop”. They headline Shipping and Receiving on Friday, so maybe you can ask them after the show. Also on this bill: Portland’s Tender Age, who remind me of The Jesus and Mary Chain (but for the Age of Tinder), as well as up-and-coming reverb rockers Ill Smiths, and the loose-limbed, relentless garage duo Jack Thunder and the Road Soda.

3) This 1-800-Collect video is probably one of my favorite things that happened in the ’90s:

Cover Festival Season kicks off on Saturday at Lola’s with the second annual Panther City Pep Rally, where local musicians join forces to masquerade as their favorite ’90s rock bands. Returning tributes include Babes in Boyland (’90s female-fronted rock like Hole), Westside Drunk Punks (’90s-era punk like Rancid and the Vandals), and the Foo (’90s-era arena rock that continues to this very day), but the lineup’s genres are wider than last year’s – besides tributes to the great alt-rock hitmakers (including STP and RATM), there’s a Pantera tribute (called Panthera), Southern Train Gypsy as Limp Bizkit, and the Wind Ropers, a group playing Garth Brooks’ greatest hits. I fucking despise Oasis with every fiber of my being, but I will give headlining Oasis tribute Definitely Mabe a pass for its name, seeing as how it is crewed in part by Mabe brothers Matt and Daniel, as Liam and Noel Gallagher, respectively. BTW: did you guys know I hate Oasis? They might actually be my least favorite band (even beating out the Chili Peps, the goddamn Doors, and maybe even stupid Morrissey), but millions of people think they’re great, and I am certain that their songs are in more than capable hands. All-in-all, Panther City Pep Rally will be a fun day where even an Oasis-hater like myself can find something to enjoy (Tool tribute Undertow is certainly on my list of ostensibly enjoyable things). The show kicks off at 3pm.

4)  Also on Saturday: The Amon Carter Museum celebrates the completion of its recent renovations with Party on the Porch, a show featuring performances by Quaker City Night Hawks, the Unlikely Candidates, and Ginny Mac. All three of these are the top of their respective genres (southern rock, modern pop rock, and accordion-prominent blues and western swing), and the event is free, running from 5-10pm. I wonder if Ginny Mac is a fan of Weird Al; he’s my favorite accordionist for sure. Wonder aloud about that while watching her in this video:

5) Raven Charter made a teaser video for their new album:

Local prog rock/heavy alternative act Raven Charter is releasing their long-awaited third album, entitled Reset, at the Curtain Club in Dallas on Saturday night, along with a band called the KuL, another called Cruella (an all-female band that cites – of all things, defunct Dallas heavy alt-band Jibe, as an influence) and Betray the Dreamer, a melodic alt-rock band returned from a brief hiatus. If you can’t make this one, the Raven Charter is doing an album release at Lola’s on October 2, but when was the last time you went to the Curtain Club? It’s possible your answer is “Never,” in which case you should go to this show and check it out.