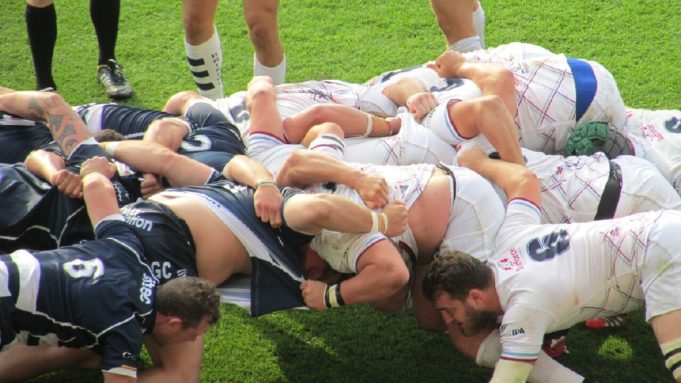 What would the Allen Americans of the ECHL do if the Winter Olympics staged its hockey tournament in Texas in the middle of the team’s season?

The Americans would have to assess how to sell tickets to their games while contests in the same sport, played at its top level, occurred nearby simultaneously. Would the best strategy be to ignore the Olympics, bash them, or perhaps find a way to take advantage of them?

In the United Kingdom, a number of rugby union teams find themselves faced with a similar decision. As the Rugby World Cup rages around them, teams like Bristol Rugby Club must find a way to market their own products, too.

England’s top rugby union league (not to be confused with the similar but different sport called “rugby league”) is the Aviva Premiership. It suspended games until the RWC enters its knockout rounds this week, kind of like how the NHL and the Dallas Stars don’t play games during the Olympic hockey tournament. Bristol, alas, finished a point short of promotion to the first division last season, so they compete in the second-best league in England, the Greene King IPA Championship. They play a regular schedule, which has so far included three home games.

I joined 4,560 fans in attending the season’s third game, which came against Rotherham. The season-low crowd may well have had something to do with rugby burnout after England’s national team had its RWC title hopes crushed by Australia the evening before.

Bristol has additional issues brought on by the Rugby World Cup. For one, the franchise had the team from Georgia (the country, not the state whose official reptile is the gopher tortoise) training in its city, potentially drawing rugby attention away from the local side. For another, Bristol actually loses players to national sides, an obstacle an ECHL team would be highly unlikely to face. Matthew Morgan got the call from Wales, Jack Lam and Anthony Perenise played for Samoa, and Tommaso Benvenuti wore a blue Italy shirt.

First Team Coach Sean Holley doesn’t view their departure as a negative, however. 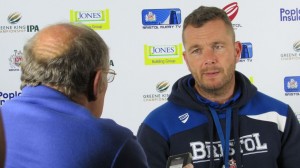 “We have four players involved and that puts Bristol on the map. They’ll come back having participated in that environment,” he said. 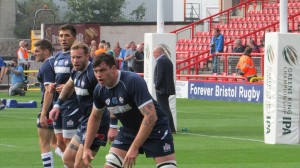 In addition to the experience the quartet of internationals will gain, an added benefit will come from the playing time the club’s younger players will get in their absence.

“That’s only going to hold us in good stead when the internationals come back,” said flanker Olly Robinson, who scored two tries (similar to American football’s touchdowns) in the win over Rotherham.

Winning games, certainly, never hurts attendance no matter what else is going on. Holley may have found another RWC benefit, as well, one that may have contributed to his squad’s four-game winning streak.

“I’ve been showing examples of good practice (as seen in the RWC) to the players,” he said.

Off the field, Bristol Rugby has chosen to embrace the biggest international event in its sport and turn interest in it to the club’s advantage as much as possible. 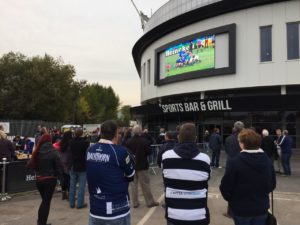 Program (aka “programme”) articles celebrate Bristol ties to the tournament. The franchise sponsors watching parties for the RWC games and encourages fans to stay after home games to watch the end of the international games as well. Fans can cluster around TVs inside the stadium, too.

To counter pressure from a nationally prominent competitor, it will often behoove a local business to emphasize grassroots initiatives. At halftime of the Rotherham game, participants in that morning’s Ashton Park schools under-13 rugby tournament paraded around the field. 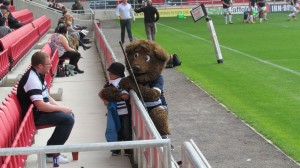 Bris has a mascot, too, to enhance the game experience of young fans, many of whom may have no idea the RWC is even going on. National mascots are never as lovable as local ones like Brizzley Bear. 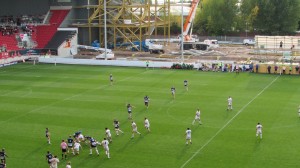 Bristol’s Ashton Gate stadium is currently in the midst of a construction phase, with the beginnings of a new west-side stand starting to take shape behind the teams’ bench areas. More than once, a kick went into touch (out of bounds in mainstream U.S. sports parlance) and into the construction site. The Bristol staff member who retrieved it did not wear a hard hat, but luckily the excavators and haulers sat idle during the match.

The project may have helped the team avoid suffering from any sponsors wanting to reserve their rugby money for RWC initiatives. Bristol Sports, which runs several teams in the area, has clearly worked hard to persuade construction contractors to get involved as club sponsors. One could count at least five companies related to the construction industry with signage in the stadium, and more had program ads and other presence. 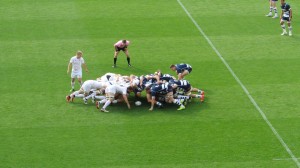 The facility the rugby team shares with soccer’s Bristol FC will eventually have the capacity to hold some 26,000 fans. Bristol Rugby hopes to win its league’s playoff this season and ascend to the Premiership, which will greatly help with filling the new stands and suites. The team might still have to play games during the 2019 Rugby World Cup, though, as it will be held in Japan. The next year, that country will also host an Olympic Games. The Olympics seem unlikely to come to North Texas any time soon, but if they do, local teams might be well advised to confer with the folks at Bristol Rugby.