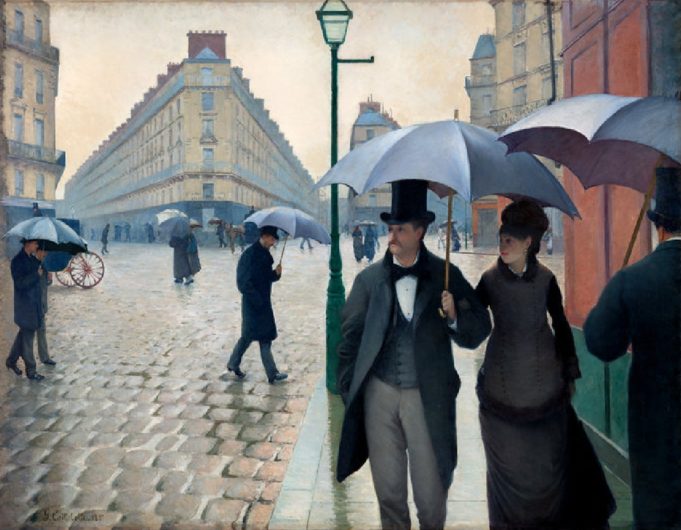 The Kimbell Art Museum’s latest exhibit (quelle surprise!) is a collection of Impressionist works. But Gustave Caillebotte: The Painter’s Eye features “a core Impressionist painter whom nobody knows,” according to George Shackelford, the museum’s deputy curator. Caillebotte was a contemporary of Van Gogh, Monet, and Matisse, and his introspective self-portrait was part of last year’s Faces of Impressionism: Portraits from the Musée d’Orsay.

The painting for which Caillebotte may be best acclaimed is “Paris Street–Rainy Weather.” At well over six feet tall and wide, the shimmering, gloriously oversized work has a tilted ground effect which almost pulls viewers into the damp Parisian street. The painting is in the Art Institute of Chicago’s collection. Thanks to their marketing, it’s probably as well-recognized as works by Van Gogh and Monet. But unlike those artists, Caillebotte isn’t a household name, or even a pronounceable one. The Kimbell made a cute promotional video for the exhibit where the film crew asked people in Fort Worth if the recognized the painting (most did), and if they could pronounce the artist’s name (it’s KAY-eh-baHt, with the accent on the first syllable and a soft “T” if you’re playing along at home).

In contrast to many of his Impressionist contemporaries, Caillebotte grew up wealthy, and trained as a lawyer. He came into the art world as a patron of Monet and Degas, then studied for a time at the Ecole des Beaux-Arts. He threw his lot in with the rebel Impressionists when his first painting, “The Floor Scrapers” was panned by the art critics of the time for its vulgarity. “The Floor Scrapers” is a portrait-esque depiction of three laborers working in an upscale house. As someone from the upper class, Caillebotte would have known the art world of Paris in the 1870s preferred portraits of nubile women, wealthy people, and still life bowls of fruit. “The Floor Scrapers” is perhaps the artist’s personal flipping of the double middle fingers to both the critics and the accepted genre of the time.

Much of the artist’s early work focused on the Parisian urban renewal of the late 19th century. Shackelford likens what was happening in Caillebotte’s Paris –– the massive infrastructure renovation and the placement of new streets, bridges, and buildings –– to the urban renewal that took place on 7th Street in Fort Worth over the past decade or so. The early paintings set Caillebotte apart from the delicate brushstrokes of Monet and Degas: They are staggeringly realistic, and the artist used geometry and architectural and photographic tools like a camera lucida (sort of an early version of a projector) to create the sense of perspective and scale. During the latter part of his career (Caillebotte died early at age 45) he turned away from the larger cityscapes and painted more Monet-esque gardens and seascapes near his country home.

The Kimbell acquired the first Caillebotte work –– the moody, blue “On the Pont de l’Europe” –– in 1976. When Shackelford began in earnest to conceptualize the exhibit four years ago, he found that some of the artist’s best works are held by either Caillebotte’s family estate or private collectors. Caillebotte was wealthy enough to be able to paint for pleasure, and detoured away from painting toward the end of his life. Nineteen of the 55 paintings were loaned by the estate, and many more came from private collectors. Gustave Caillebotte: The Painter’s Eye runs through February 14, 2016 in the museum’s Renzo Piano Pavilion.