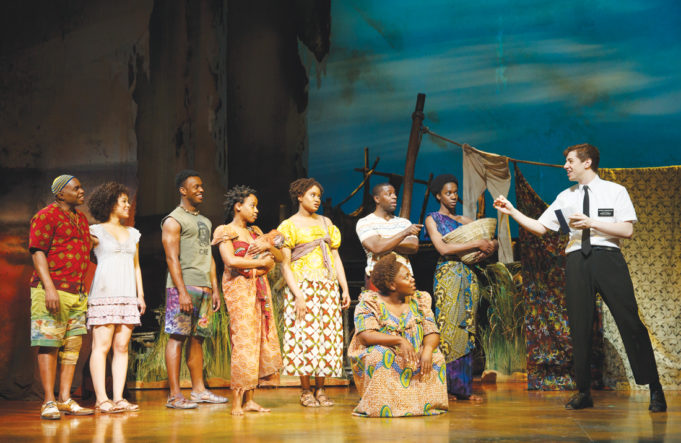 Almost five years after The Book of Mormon debuted on Broadway and won seemingly every Tony Award in sight, this daffy, satiric, extremely foul-mouthed musical makes its way to Fort Worth. Co-creators Trey Parker and Matt Stone, have always had an abiding love for Broadway musicals that seeped into their TV show South Park and its spinoff movie. They teamed up with songwriter Robert Lopez (who’d later go on to write the songs for Frozen) for their maiden stage effort, and the result dazzled everyone.

The story is about two Mormon elders who travel from America to Uganda to proselytize among the natives. Along with parodies of various other Broadway musicals like The Lion King and The King and I, the show gleefully sends up its sheltered white heroes who run into genuine Third World suffering, which the locals deal with in song and dance. (The village chief leads everyone in a chant of “Hasa Diga Eebowai,” which turns out to mean “Fuck you, God!” To think, this was written by the guy who wrote “Let It Go.”) Despite all the obscenity and casual blasphemy, The Book of Mormon remains respectful toward its characters’ religious impulses and their urge to improve the world. That would even raise a smile from the angel Moroni.