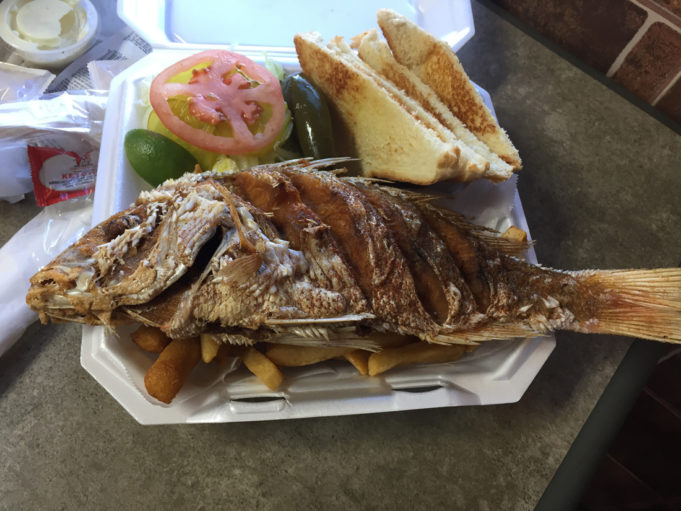 Restaurants on Miller Avenue on the East Side are awfully colorful –– and in some cases just colored awfully, like the “Barney purple” Taqueria Tepito (1104 Miller Ave., 817-536-5653) and the harlequin-hued Fort Worth Seafood Market (4158 E. Rosedale St., 817-413-0582). Then again, maybe the ghastly color schemes are a stroke of marketing genius. After all, I noticed, stopped, and ate at both places on my recent food-exploration of the neighborhood, near the Miller and Rosedale Street intersection.

The Seafood Market’s exterior either looks like some brain-fried design school grad student sketched it after gobbling mushrooms and binging on Adult Swim cartoons or the owners of the place bought whatever color of paint was on sale at the surplus store, mistook the front of their building for a piece of loose leaf paper, and just started listing every lake fish they could remember. Either way, it’s bright and funky.

Inside, guests are greeted by a deli case filled with schools of fish on ice, mouths agape like they were all in the middle of a sentence. There’s another room with a menu plastered on the wall behind a walk-up counter. As far as I could tell, only two people were on duty. That might explain the sign posted in the dining room that asked, nay, demanded that patrons clean up after themselves.

Almost everything on the menu is fried. Only a couple of items, like the way too sugary shrimp cocktail ($7.99) and the delicious, dense, flaky ceviche tostada ($3.50 each), were spared a canola oil bath. My menacing-looking whole red snapper ($11.99) swam a little too long in the fryer, but the manhole cover-sized fish was still meaty and tasty. The accompanying grub served alongside the snapper was hilariously excessive. I was happy to see the tender fries dusted in seasoning salt along with the pencil eraser-looking hush puppies, but I could have done without the two pieces of toast and the shredded iceberg lettuce salad topped with pickles and served with an airline packet of creamy ranch dressing. My biggest complaint was that I wanted a real plate and fork, not the flimsy Styrofoam box and plastic flatware I was given to tame that beast. At least the disposable table setting made it easier to clean up after myself.

Taqueria Tepito was just as colorful but lacked the cluttered frenetic charm of the Market. (Tepito’s bathroom also lacked a toilet seat, so be prepared to hover, ladies.) The building looks like one of those pre-fab boxes you see advertised on late night TV, so it wouldn’t exactly be my first choice for cover during a tornado. With the exception of the pre-teen who bussed tables there, the structure’s color was the only thing about the place that hinted at personality.

The staff could have used what the kids call “swag.” Still, there was something soothing about the calmness of the woman who took my order, especially considering the droves of customers who shuffled in and out of the tiny restaurant. She coolly warned my guest and me that there was going to be a long wait for our order, though it wasn’t too bad.

The huaraches with pastor ($6.95) was well worth the modest wait. The tender citrus-kissed bits of slow-cooked pork, rich refried beans, grilled sweet onions, and cilantro sat atop a pizza dough-esque corn cake. The enormous disk begged to be slathered in a blast of the kitchen’s spicy, if watery, salsa verde. The pozole de puerco ($6.95), unfortunately, wasn’t seasoned at all. That was a huge shame, because the shimmering red broth oozed umami, and a touch of salt would have propelled the dish to greatness.

I guess I can’t blame restaurants in poor areas of town for doing everything they can to stand out –– though not having plates or a toilet seat also set the places apart in a bad way. Still, the food was pretty good. Color me interested.