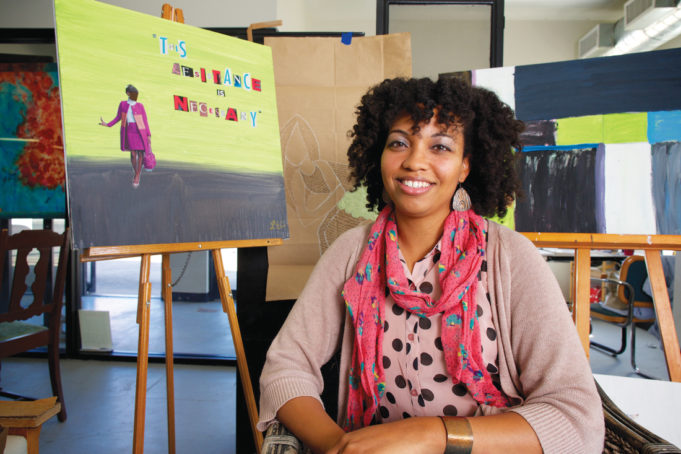 It’s been one year since Lauren Cross said goodbye to her socially conscious art gallery space on Race Street.

She knew that real estate development nearby could one day spell her departure, but the incident that led to the closure of WoCA Projects was much more sudden. And shocking.

Just 30 minutes after Cross closed her studio for the night and went home, a motorcycle gang-related shooting nearby left one man dead and a neighboring building with shattered glass and bullet holes. Even after the shooting, the 32-year-old Cross was torn about leaving not just her first gallery but her first business venture. She sought advice from close friends and mentors. She still had shows scheduled and wasn’t sure how she would put them together without her own building.

And there haven’t been any news reports of further violence.

Cross is happy, too. “I don’t regret my choice” to move out, she said. “I knew WoCA would still exist without the space, but I didn’t know it could exist in such a great capacity.”

As a woman of color, Cross is aware that that she and women like her are underrepresented in the visual arts. WoCA (short for Women of Color Artists) has always been an extension of her vision to present art in a manner that builds community and questions racial and gender stereotypes. Her mission will never change, she said. What is different now is that instead of in one space, WoCA is everywhere.

Through collaborations, juried competitions, and pop-up shows, WoCA has become a sort of moving gallery. Cross recently concluded the 3rd Annual Juried Artists’ Books Exhibition at the Fort Worth Community Arts Center. The display featured works by 30 artisans from across the United States. The underappreciated medium, in which works must take the form of a book, is rarely seen by the public in Fort Worth, she said.

A few months earlier, Cross was asked by the Bluebonnet Circle promotional group Bluebonnet Village Alliance to organize a pop-up art show. Cross then reached out to the Fort Worth Art Collective, a volunteer group that promotes its members. With their help, she curated a show featuring several local artists, including Carol Benson, Ariel Davis, and Jason Reynaga. The one-day event, she said, was a hit.

“This has become an opportunity for WoCA to not just be about one area,” Cross said. “We are finding ways to connect with other parts of Fort Worth that we never would have been able to connect with before.”

Change is nothing new for the Houston native. Her first calling was nursing, she said, but after entering the University of Texas at Arlington in 2001, she realized she was more interested in what her friends in art and music were studying. Cross was an active artist as a child but never knew it could be a career option. She then changed her major to photography and media arts only to realize she was woefully behind her peers’ firsthand exposure to classical art. That led to an exchange program and eventual transfer to Richmond, The American International University in London, England, in 2006.

It was while working on a class project in England that she first envisioned the possibility of opening a museum themed around the African diaspora to the United States.

Being overseas “made me think about where I fit in the international scope of art,” she recalled.

Surrounded by exchange students, Cross began to notice the complexities of race relations within various countries. But a subsequent move to Boston while her husband, Solomon Cross, finished graduate school at the New England Conservatory of Music put her plans on hold.

The newlyweds moved first to Weatherford before finally settling in Fort Worth in 2010. The move, prompted by a job opportunity for Solomon, introduced Cross to a rich network of museum and studio spaces that reignited her interest in finding her own art space.

Simply teaching in an academic setting, she said, isn’t enough to address the complex issues of social justice. Having a space allows the community to gather and speak about social and cultural issues.

After considering the Near Southside, she settled on Race Street, mostly due to the presence of established private art studios. The nonprofit WoCA Projects, owned and operated solely by Cross on a volunteer basis, opened in early 2013. That first year was a whirlwind of monthly shows and receptions. By then, Cross had broadened her concept to focus on minority women while allowing space for artists of any background whose works highlighted intercultural connections.

WoCA, she said, has always been a “thread” that ties groups together and spotlights our interconnectivity.

January will also mark WoCA’s three-year anniversary. Cross is on track to earn her doctorate degree from Texas Woman’s University, in Denton, in multicultural women’s and gender studies with a focus on art theory and curating next spring.

After that, she plans to redouble her focus on broadening the base of WoCA supporters. It’s not about the brand, she said. It’s about spreading the concept.

“I want to encourage people in the community to be just as passionate about social justice as I’ve been,” she said.