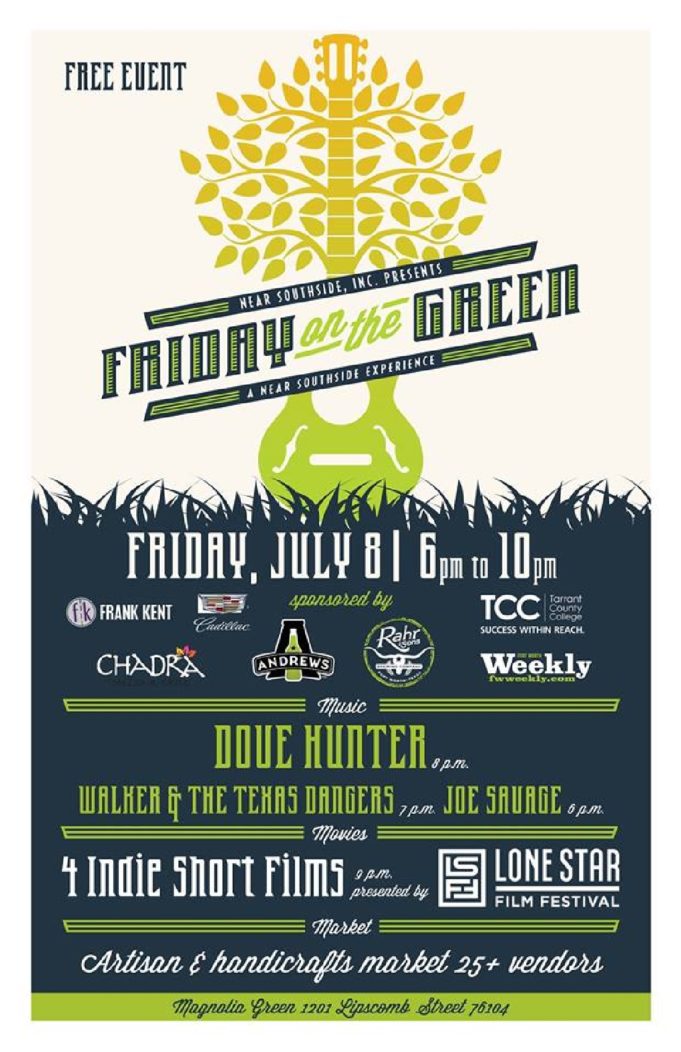 Tonight is July’s Friday on the Green, headlined by experimental roots/rock (that’s different than “roots rock,” in my opinion) band Dove Hunter, with bluegrass party boys Walker and the Texas Dangers at 7pm, and soulful songwriter Joe Savage starting the show at 6pm. After the music, the Lone Star Film Society is showing four short films between 4 and 13 minutes long. Funnily enough, one is called The Present and the other is called The Gift. As for the other two, The Night’s Watch: Protecting the Dark Skies of Texas is a short doc about an astronomer fighting light pollution, while The Red Thunder is about a nerdy teenage girl stealing her mom’s car to go on a date and the unexpected, life-changing consequences that ensue. Because it’s a family-friendly event, I assume The Red Thunder isn’t as dark as my summary portends. As usual, the event is free, but there will be food trucks and other artisanal things to spend money on. Check out this video of Walker and the Texas Dangers jamming at the Double Wide:

2) The Chat Room has a free show Friday night starting at 9: from first band to last, the bill is Son of Stan, Duell, and War Party. Come early, since the Chat Room is small. Here’s a clip of War Party covering “Nervous Breakdown” with the help of half of Vorvon’s original lineup:

3) Saturday night at the Grotto, Long-running space-rock outfit Stumptone is celebrating the release of Spark, their third full-length and first album in five years. You can read more about it in this week’s music feature, as well as a review of Looks Like Rain, the new album Signals and Alibis is releasing at the show as well. Bring extra cash to support local artists – if you dig analog media, that Stumptone record (out on Dreamy Life) will be a rad addition to your collection. The Cush and Wire Nest are both on this bill as well. Whatever time you’re getting your 420 on, you should cue this Wire Nest video:

4) Did you read the cover story from the week of the Music Awards? Great jobs are in order to both my fellow Weekly contributors, editors, and scene participants who took part in it, but also, there’s a comment that Live Oak’s Brooks Kendall makes about promoters spending money on bigger shows and then getting kicked in the ass (or specifically, in their wallets’ asses) when the fans don’t show up. You can read it here, if you want; I don’t mean to guilt-trip anyone into going to a show, but the bill booked for Saturday night at the Live Oak is precisely the kind of concert he’s talking about. For around $15 (the Ticketfly link says $13-18, but it’s all ages so maybe minors have to pay more), Afallon Productions brings you Panther City Panic, a seven-band show featuring three kickass, mid-level touring indie bands: headliners Alpha Rev, Austin shoegaze act Ringo Deathstarr, and rock ’n soul Nic Armstrong and the Thieves. Those three are worth the ticket price alone, but the local support is pretty solid, too – Denton’s Birds of Night (whose most recent, self-titled album is one of my favorite local releases of the past few years), Joe Gorgeous, Svenny Baby, and Matthew McNeal play the opening slots between 5pm and 8:45.  Doors are at 3pm. Definitely don’t miss Nic Amstrong; here’s why:

5) The friends and family (both by blood and by bar) of Quian Perez are holding a benefit party at the Sunshine Bar in Arlington raise funds to pay bills while he battles cancer. Convoy and Cattlemen, The AT-ATs (who do you say the name of a four-legged Imperial Walker?), Stealers, Tame Tame and Quiet, Bad Feeler, and Suckage. The recommended donation is $5, but please, feel free to donate more. Love your fellow humans, people.