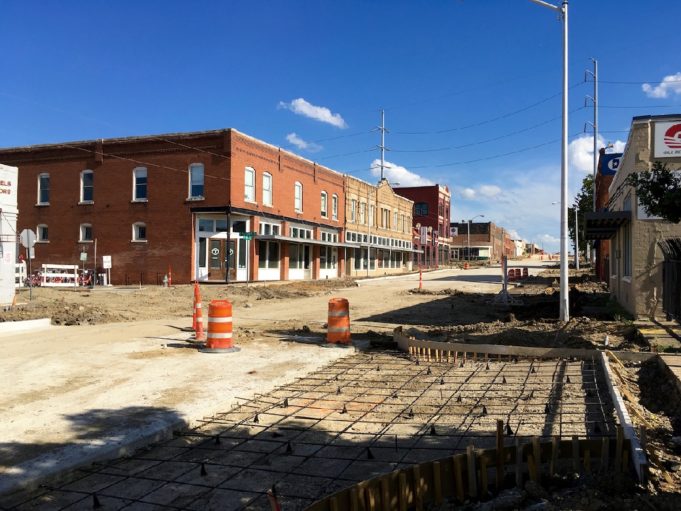 I know it’s hard to remember a time when South Main wasn’t a post-apocalyptic land of construction equipment, dirt piles, and roving gangs of spice raiders, but think back. Back to the Before Time, in the Long, Long Ago, when I first wrote about South Main embarking on its long-awaited makeover. That was a little more than a year ago, so it’s about time to check up on the Near Southside’s potential second center of gravity and see how things are progressing.

In 2015, the South Main Street area was scraped down to the dirt, and the city kicked off an ambitious redesign and re-engineering effort to bring the street in line with the pedestrian-and-bike-friendly vision that neighborhood leaders have for it. Though it has felt at times that progress has been glacial, things have been happening with such frequency lately that South Main is actually starting to resemble a real place again.

Most notably, the street itself has been poured, giving us a much better idea of what the finished space is going to look like in the end. The new street is overall slightly narrower than the old one, and will feature the same basic arrangement as the pre-reconstruction street did after it was given a road diet: one lane in each direction, with dedicated bike lanes on each side. 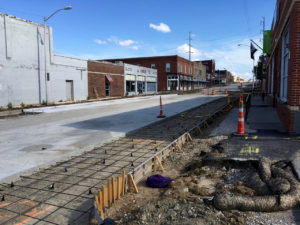 The somewhat narrower street space gives more room to the sidewalks, which are in the process of being poured. The primary segments of sidewalks are wider by the same amount that the street is narrower, but the new South Main has the added benefit of sizable bulb-outs at intersections. These are radically larger sidewalks that cap off each block, creating not only more and better public space –– they also create shorter crossing distances for pedestrians trying to get across the street.

On top of the rearrangement of physical space, the new South Main will also be getting pedestrian-scaled lighting, street trees, and benches to further create an appealing place for people to gather. In addition, the street will be getting a new public art installation created by artist Benito Huerta.

Barring any unforeseen delays, we should be seeing the new South Main finish up sometime late this year. Once complete, it will be interesting to see how the new street is embraced by the public and how quickly it attracts new development.