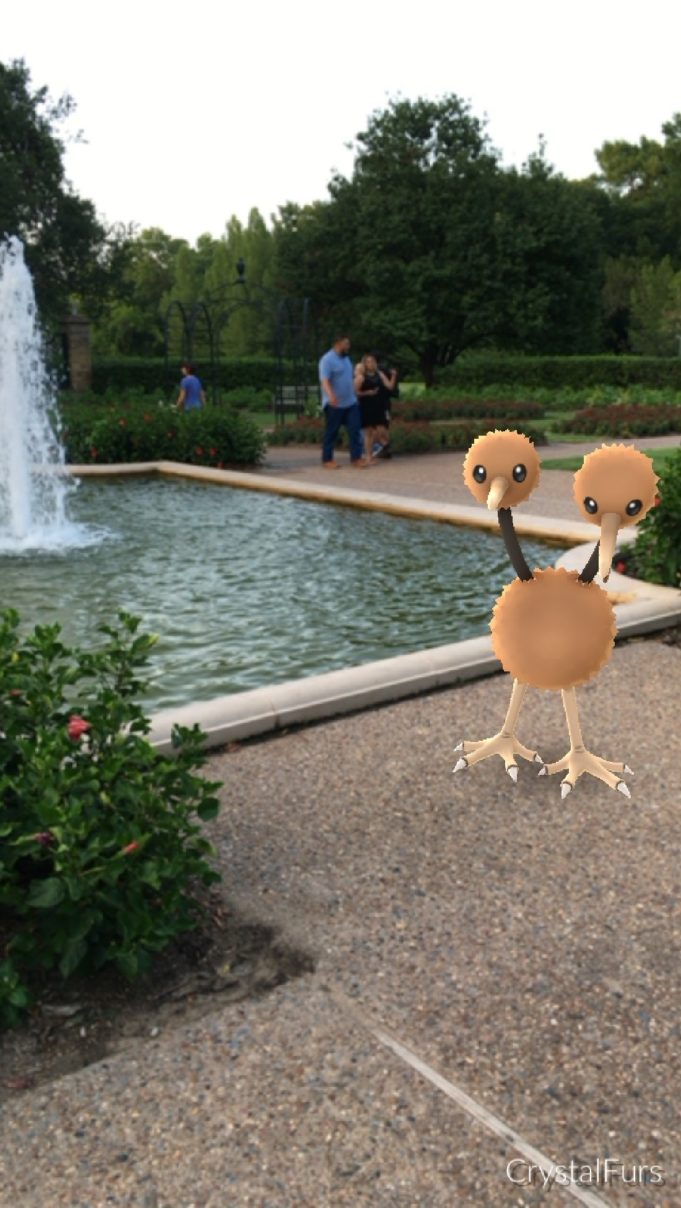 Augmented reality is the process by which virtual information and objects are overlaid on the real world, by being added into a live camera view seen through the phone’s display. Pokemon Go uses this technology to let players chase the various animal denizens of the Pokemon universe around the real world, allowing you to, say, visit the local coffee shop, a famous art museum, or the United States Strategic Helium Reserve to snag the Charmander you’ve always wanted, so that you may then force it to compete in captive animal combat.

To see for myself, I downloaded Pokemon Go and headed to the Fort Worth Botanic Garden. It was full of people, and virtually everyone had their eyes locked to a smartphone running Pokemon Go.

Walking through the garden, I passed a family –– a couple of adult women, an adult man, a couple of young kids. All playing Pokemon Go. One woman remarked to the family, “I ain’t found shit,” to which the other woman replied “It’s OK that you suck. Your family still loves you.” Minutes later, a young couple ran past me at top speed along the boardwalk. The young woman yelled to her young male friend, “Have we found your stupid Pokemon yet?” Unperturbed, the guy shouted back “We’re getting closer,” to which she shout-replied “Well, you’re stupid!” The guy seemed not to notice.

On my way out of the garden, I passed the ain’t-found-shit family again, but they were pulled out of the game by a passing twentysomething guy and his friend who were offering advice on where to search the grounds for desirable Pokemon.

The sights were the same when I visited Sundance Square, and downtown Dallas, and the square in Denton. People immersed in this virtual fantasy world of cute fighting creatures, exploring our walkable urban spaces together, offering help to each other where they could.

It’d be easy at this point to deride Pokemon Go players for having their faces buried in their glowing rectangles, only taking the time to visit these wonderful places when they have the excuse of hunting Pokemon but otherwise not engaging with the world. (There’s been no shortage of such reactions expressed on social media.) But…I’m not so sure I can get behind that viewpoint. What makes “hunting Pokemon” any less valid a reason to visit the Botanic Garden or Sundance Square or Magnolia Avenue than “taking photos of flowers” or “grabbing a bite to eat” or even just “taking a walk because you feel like it?” Urbanism doesn’t come with a list of authorized uses.

If anything, I feel like Pokemon Go reveals how important building great, human-oriented places is – and how few of them we truly have in cities like Fort Worth. From my exposure to the game, I can’t see how it would work nearly as effectively in a suburban setting where the use of a car is a requirement for mobility. It’s a game that cries out for street grids, wide sidewalks, pedestrian-oriented buildings, and parks and plazas woven into their fabric. It’s a game that thrives on density.

There are approximately 63 trillion people playing Pokemon Go in urban Fort Worth at this very moment. Sure, some of them may solely be going out to hunt for Pokemon – but plenty of them are likely discovering new places, new landmarks, and new views of their city in their explorations. If capturing adorable cartoon animals to make them do your bidding gets even a small number of players to gain a new appreciation for walkable urban Fort Worth – and support further efforts to make the city into a more human-oriented place – then that’s not a bad outcome.