Social media have played an important role in recent social movements, from the Arab Spring to Black Lives Matter, but technology can potentially undermine democracy as well as empower it.

In particular, search engine algorithms and electronic voting machines provide opportunities for manipulation of voters and votes, which could profoundly affect the 2016 election.

In Index on Censorship, Mark Frary describes the latest research by Robert Epstein and Ronald E. Robertson of the American Institute for Behavioral Research and Technology on what they call the Search Engine Manipulation Effect, or SEME.

Their study of more than 4,500 undecided voters in the United States and India showed that biased search rankings “could shift the voting preferences of undecided voters by 20 percent or more” and “could be masked so that people show no awareness of the manipulation.”

In an earlier article for Politico, Epstein wrote that the Search Engine Manipulation Effect “turns out to be one of the largest behavioral effects ever discovered. … [W]e believe SEME is a serious threat to the democratic system of government.”

Because courts have ruled that private companies’ source code is proprietary, the entities that own electronic voting machines are essentially immune to transparent public oversight, as Harvey Wasserman and Bob Fitrakis have documented. 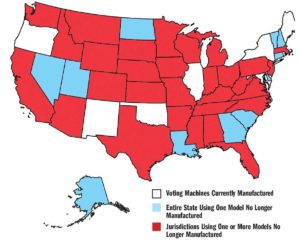 In 2016, about 80 percent of the U.S. electorate will vote using outdated electronic voting machines, ones that rely on proprietary software from private corporations, according to a September 2015 study by the Brennan Center for Justice at the New York University School of Law.

In the study, the Brennan Center identified “increased failures and crashes, which can lead to long lines and lost votes” as the “biggest risk” of outdated voting equipment, while noting that older machines also have “serious security and reliability flaws that are unacceptable today.”

Jeremy Epstein of the National Science Foundation said that “from a security perspective, old software is riskier because new methods of attack are constantly being developed and older software is likely to be vulnerable.”

On Democracy Now! and elsewhere, Wasserman and Fitrakis have advocated universal hand-counted paper ballots and automatic voter registration as part of their “Ohio Plan” to restore electoral integrity.

While there has been some corporate media coverage of Epstein and Robertson’s research, the transparency and reliability advantages of returning to paper ballots remain virtually unexplored and un-discussed.

The world is experiencing a global refugee crisis (60 million worldwide, according to a June 2015 report, 11.5 million of them Syrian). This has been covered in the corporate media — though not nearly enough to generate an appropriate response. What has not been covered is the increasingly well-organized exploitation of refugees, particularly those displaced in Syria.

In an AlterNet article, Sarah Lazare — cited by Project Censored –– warned of the World Bank’s private enterprise solution to the Syrian displacement crisis.

“Under the guise of humanitarian aid,” Lazare wrote, “the World Bank is enticing Western companies to launch ‘new investments’ in Jordan in order to profit from the labor of stranded Syrian refugees. In a country where migrant workers have faced forced servitude, torture, and wage theft, there is reason to be concerned that this capital-intensive ‘solution’ to the mounting crisis of displacement will establish sweatshops that specifically target war refugees for hyper-exploitation.”

A World Bank press release touted “the creation of special economic zones or SEZs,” but as Project Censored noted, “Myriam Francois, a journalist and research associate at The School of Oriental and African Studies at the University of London, told Lazare that the development of SEZs in Jordan ‘will change refugee camps from emergency and temporary responses to a crisis to much more permanent settlements.’ ”

The SEZ proposals, Francois said, are “less about Syrian needs and more about keeping Syrian refugees out of Europe by creating barely sustainable conditions within the camps, which would then make claims to asylum much harder to recognize.”

In a Black Agenda Report story, Glen Ford described a related agreement between Turkey and the European Union to keep millions of refugees from entering Europe as “a deal between devils,” adding that Turkey has “cashed in on the people it has helped make homeless.”

In addition to the $3.3 billion in EU money, Project Censored noted:

Turkey has also sought admission to the European Union, and, with this, the right for 75 million Turks to enter Europe without visa restrictions as a condition for controlling its refugee population.

Thus, according to Ford, Turkey has engaged in a “vast protections racket trap,” effectively agreeing to protect Europe from further incursions by “the formerly colonized peoples whose labor and lands have fattened Europe and its white settler states for half a millennium.”

“Europeans will never accept Turkey into the fold, because it is Muslim and not quite white,” Ford concluded.

6. More than 1.5 Million American Families Live on $2 per Person per Day

Even the working poor receive scant attention, but those living in deep poverty — less than $2 per day — are almost entirely absent.

Kathryn J. Edin and H. Luke Shaefer, sociologists and coauthors of the book $2.00 a Day: Living on Almost Nothing in America, state that in 2011, more than 1.5 million U.S. families — including 3 million children — lived in deep poverty at any given month.

Their depiction of what poverty looks like reads “like a Dickens novel,” Marcus Harrison Green wrote in YES! Magazine, while in The Atlantic, economist Jared Bernstein noted that the team’s research highlights the problematic long-term consequences of President Bill Clinton’s 1996 welfare reform initiative, with its “insistence on work without regard to job availability.”

First, policy must start by expanding work opportunities for those at the very bottom of society.

Second, policy must address housing instability, which Shaefer described as both a cause and a consequence of extreme poverty. “Parents should be able to raise their children in a place of their own.”

Third, families must be insured against extreme poverty, even when parents are not able to work.

William Julius Wilson, a leading sociologist in the study of poverty, described their book as “an essential call to action” in a New York Times book review, but this was a rare recognition in the corporate press.