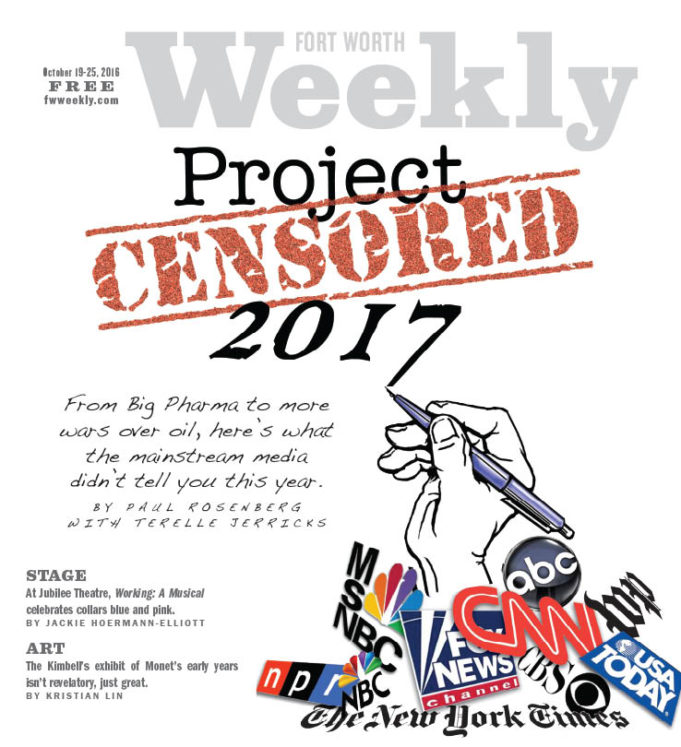 Throughout its 40-year history, Project Censored has covered a lot of ground that the corporate mainstream media have missed. Begun by Carl Jensen, a sociology professor at California’s Sonoma State University shortly after Watergate in 1976, it’s become an imperative, involving dozens of students and faculty members and institutions working together to come up with an annual list of the Top 25 Censored Stories of the Year.

The Watergate burglary in June 1972 “sparked one of the biggest political cover-ups in modern history,” Jensen later recalled. “And the press was an unwitting, if willing, participant in the cover-up.

On the upside, it led to the creation of Project Censored.

As with the Watergate story, these aren’t censored in the overt, heavy-handed manner of an authoritarian dictatorship but in the often more effective manner reflecting our society — an oligarchy with highly centralized economic power pretending to be a “free” marketplace of “ideas.”

It may give people what they think they want in the moment, but it leaves them hungry for more, if not downright malnourished in the long run. The missing stories concern subjects vital to the healthy functioning of our democracy. The problem is, we may not even realize what we’re missing, which is precisely why Project Censored is essential.

Another way to think about it is as censorship of what the people as a whole can hear, rather than what any one individual can say. Article 19 of the Universal Declaration of Human Rights makes it very clear: Freedom of opinion and expression includes the right “to seek, receive, and impart information and ideas through any media and regardless of frontiers.”

This year, 221 students and 33 faculty members from 18 college and university campuses across the United States and Canada were involved. A panel of 28 judges made up of media studies professors, professional journalists, and even a former commissioner of the Federal Communications Commission also participated.

In addition to its chief focus, there are plenty of other goodies in the annual report, including “Junk Food News,” a retrospective of the project, and a chapter called “Media Democracy in Action,” all of which will be published in the Fort Worth Weekly in the following weeks.

All of these reflect the fact that news isn’t just created for individuals to consume but for citizens to debate, discuss, and then take action on. The real Project Censored, in short, includes you, the reader.

Project Censored has always dealt with specific stories, but on anniversaries like this one, the larger patterns in which those stories fit are impossible to ignore. Economic inequality, global warming, petro-politics, suppression of health science, government spying, corporate influence of government –– these are all familiar themes that appear again on this year’s list. But a bit more ought to be said by way of introduction to this year’s top censored story, before starting the list proper.

Jensen began the preface to Project Censored’s 20th anniversary edition with the story of how John F. Kennedy killed a detailed New York Times story blowing the whistle on the planned invasion of Cuba. A shrunken, muted version ran in its place. Afterward, Kennedy told a Times editor, “If you had printed more about the operation, you could have saved us from a colossal mistake.” This year’s No.1 censored story is a direct descendent of the story JFK wished he hadn’t managed to kill.

The covert exercise of U.S. military power is a recurrent subject of Project Censored stories. This year’s top censored story joins that long tradition. It deals with the massive expansion in the number of countries where the officially unnamed war on terror is now being waged by U.S. Special Operations Forces — 147 of the world’s 195 recognized nations, an 80-percent increase since 2010. This includes a dramatic expansion in Africa.

The majority of the activity is in “training missions,” meaning that the expansion is promoting a coordinated worldwide intensification of conflict, unseen at home but felt all around the globe. Writing for TomDispatch, The Nation, and The Intercept, Nick Turse exposed different aspects of this story and its implications.

In his Intercept piece, Turse focused on the development of a single base, Chabelley Airfield, in the East African nation of Djibouti. It’s an “out-of-the-way outpost” transformed into “a key hub for its secret war … in Africa and the Middle East.”

In The Nation, Turse tackled the question of mission success. Project Censored noted that “Turse [had] reported skepticism from a number of experts in response to this question, pointing out that ‘impacts are not the same as successes.’ ”

In Vietnam, body counts were mistaken for signs of success.

“Today,” Turse was told by Vietnam veteran and author Andrew Bacevich, “tallying up the number of countries in which Special Operations forces are present repeats this error.”

The role of science in improving human health has been one of humanity’s greatest achievements, but the profit-oriented influence of the pharmaceutical industry has created a crisis situation. That research simply cannot be trusted. Burying truth for profit is a recurrent theme for Project Censored. The top 1981 story concerned fraudulent testing from a single lab responsible for one-third of the toxicity and cancer testing of chemicals in America. But this problem is much more profound.

“Something has gone fundamentally wrong,” said Richard Horton, editor of The Lancet, commenting on a U.K. symposium on the reproducibility and reliability of biomedical research:

[M]uch of the scientific literature, perhaps half, may simply be untrue. Afflicted by studies with small sample sizes, tiny effects, invalid exploratory analyses, and flagrant conflicts of interest, together with an obsession for pursuing fashionable trends of dubious importance, science has taken a turn towards darkness. … The apparent endemicity of bad research behaviour is alarming.

Horton’s conclusion echoed Marcia Angell, a former editor of The New England Journal of Medicine, who went public in 2009. 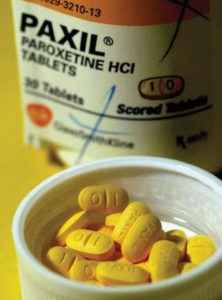 A classic case was Study 329 in 2001, in which it was reported that paroxetine (Paxil in the United States, Seroxat in the United Kingdom) was safe and effective for treating depressed children and adolescents, leading doctors to prescribe Paxil to more than 2 million U.S. children and adolescents by the end of 2002, before being called into question. The company responsible (now GlaxoSmithKline) agreed to pay $3 billion in 2012, the “largest healthcare fraud settlement in U.S. history,” according to the U.S. Department of Justice.

Still, the study has not been retracted or corrected, and “none of the authors have been disciplined,” Project Censored points out. This, despite a major reanalysis in which the original report’s claims are “starkly” contradicted. The reanalysis was seen as the first major success of a new open data initiative known as Restoring Invisible and Abandoned Trials.

While Project Censored noted one Washington Post story on the reanalysis, there was only passing mention of the open data movement. Otherwise, “the corporate press ignored the reassessment of the paroxetine study,” and beyond that, “Richard Horton’s Lancet editorial received no coverage in the U.S. corporate press.”

Systemic changes associated with global warming threaten human welfare and all life on Earth through a multitude of different pathways. These remain largely hidden from public view. One potential pathway — directly dependent on carbon, not temperature — is through the catastrophic overproduction of Trichodesmium bacteria, which could devastate the entire marine food chain in some regions. It lives in nutrient-poor parts of the ocean, where it fixes atmospheric nitrogen into ammonium, an essential nutrient for other organisms — from algae to whales.

A five-year study by researchers at the University of Southern California and Woods Hole Oceanographic Institution found that subjecting hundreds of generations of the bacteria to predicted CO2 levels in the year 2010 caused them to evolve into “reproductive overdrive,” growing faster and producing 50 percent more nitrogen.

As a result, they could consume significant quantities of scarce nutrients, such as iron and phosphorus, depriving the ability of other organisms to survive. Or the Trichodesmium bacteria could drive themselves into extinction, depriving other organisms of the ammonium they need to survive.

“Most significantly, the researchers found that even when the bacteria were returned to lower, present-day levels of carbon dioxide, Trichodesmium remained ‘stuck in the fast lane,’ ” Project Censored noted, a finding that one researcher described as “unprecedented in evolutionary biology.”