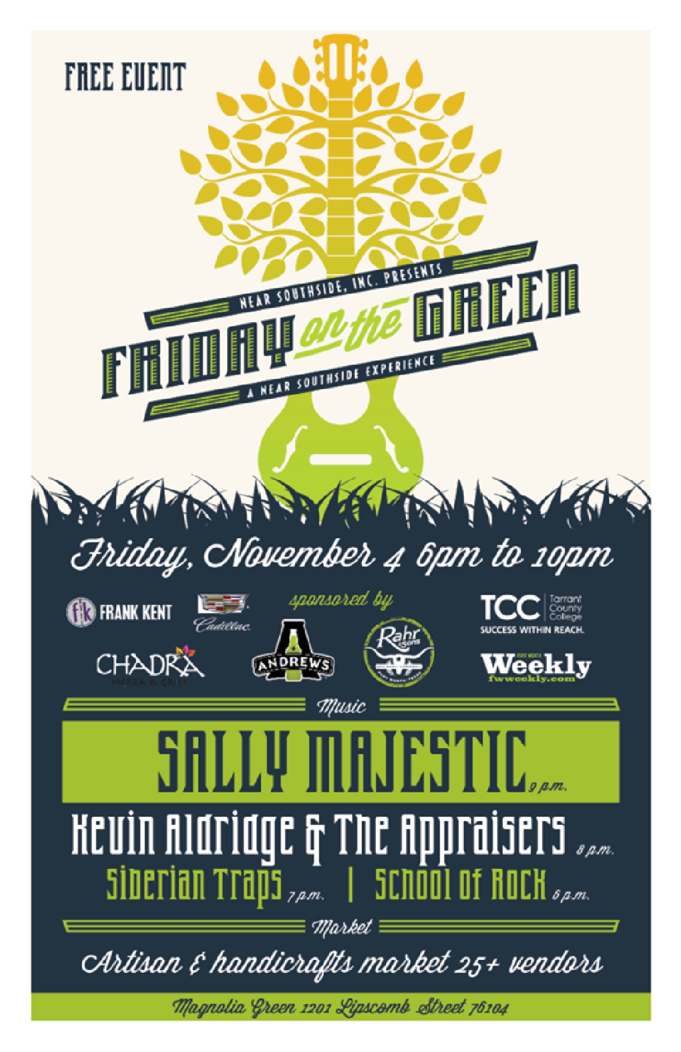 1) The last Friday on the Green of 2016 is tonight (Friday, duh), starring Kevin Aldridge and the Appraisers, Siberian Traps, and School of Rock; the School kids’ll kick off the night at 6pm, which, if you hadn’t noticed, is when it starts getting dark outside – America Falls Back on Sunday, so prepare yourself accordingly. I’ll say this about the date and the bands and the sudden blessing of fall weather today – KA and the A and Siberian Traps both have a base note of melancholy in their music underneath the sunny melodies and hooks (one reason both bands are personal favorites), and they’re both great soundtracks for this weekend’s autumnal shift. Oh sure, on Monday, it could be a thousand degrees here because Texas, but even if the weather ignores the calendar, it can’t ignore the tilt of planet Earth. Here’s a video about Daylight Savings Time:

2) I forget the funny things Squanto’s Rickey Kinney told me about his gig at the newly opened Ridglea Room last Friday, but I do recall him saying it was a nice room with good sound. The Ridglea Room’s bill tonight (Friday, if you recall from item numero uno) is all recognizable names: from headline to opener, the lineup is War Party, Loafers, and Dead Mockingbirds. I’ve said plenty of these bands before, but for the sake of clarity, these bands can be generally described as “punk and roll.” If you are hard-pressed to travel west of University Dr. to see a show, this is as good a lineup as you could want to make you travel outside your usual Friday night routine and see what’s going on over in New Ridglealand – and in fact, why don’t you go pre-game at Whiskey Business? It’s right down the street, and you can compare it to your memories of the Mule. This is a pretty rad Dead Mockingbirds video:

3) Really, Vandoliers? A re-release party of your album? That’s the sort of move I would’ve kidded the Orbans about doing – it’s a good thing I don’t know how to put an eyeroll emoji into MS Word lol! But anyway, I liked your album quite a bit, and however anyone wants to promote their own music, I wish them the best of luck and am eager to see if it works, because I have no idea what the best way is either. The Vandoliers bring their Ameri-kinda sound (a rowdy, outlaw country-inspired take on cowpunk) to Lola’s Friday night along with Americana act Cutthroat Finches and noir-ish folk punks Phantom Sensation in the opening spots.

4) Have you seen Movie the Band yet? Here’s another chance – they’re the middle band at Lola’s Saloon on Saturday night, between headliners Animal Spirit and openers Telemegasounds. Movie the Band has a new tape out, so bring some money to get it; I bet it comes with a download code or something similar if you don’t have a boombox or an ’87 Civic on hand with which to listen to cassettes. They they appear to have been around for a few years, Telemegasounds are a new to me, but their songs on Bandcamp make me suspect there might be a Sunny Day Real Estate fan in the band. Someone should book them on a bill with the Cush! Animal Spirit released this video about a month ago:

5) One way or the other, it’ll all be over Tuesday night – whether we get Career Politician Woman or Villain from a Parallel Universe’s James Bond Franchise in charge of America’s next four years, there will still be musicians forming opinions about the world, hopefully forever and ever. Some of them (a lot, in fact) are gathering at the Live Oak Lounge for a “blues jam” hosted by world-traveling, Texas troubadour Keegan McInroe. It starts at 9pm and goes until midnight, with appearances by Daniel Katsuk, Big Cliff Watkins, Brady Hamilton, Nick Choate, Bobby Gardner, Abel Casillas, Morris Holdahl, Matt Tedder, Deanna Valone, Joe Cannario, Caleb Stanislaw, Ben Napier, and Jackie Darlene, plus other local songwriters and musos who will undoubtedly jump on stage for backing vocals or whatever. This is the newest Super Deluxe video, making jokes about Trump TV. Man I hope he loses! So sick of his stupid fucking scowl and voice!