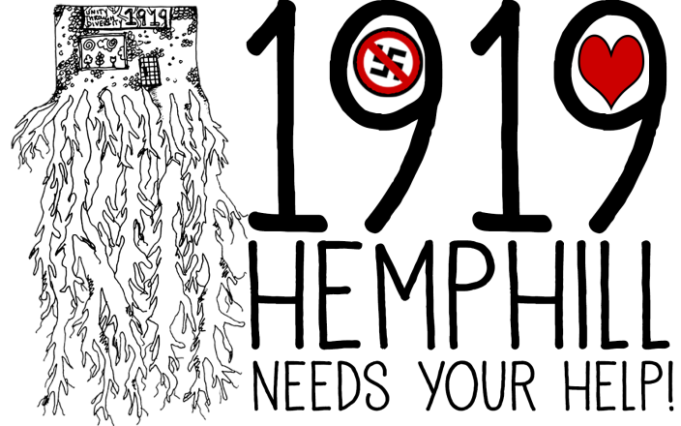 In response to several complaints to the Fort Worth Fire Department last week, 1919 Hemphill launched a fundraising campaign for remodeling, to ensure that the two-story building on the Near Southside is up to code. In just 20 hours, 94 donors crushed the initial goal of $2,000. Al Rios, who oversees the volunteer-run, 15-year-old DIY community space and concert venue with Chris Cotter, promptly raised the goal to $4,000.

“I think that would put us in a good situation financially,” Rios writes on 1919’s fundraising page. “No matter what, all the money we raise will go into building improvements.”

In 1919’s logo for the fundraising campaign, a red slash cuts through a swastika –– neo-Nazis appear to be behind the flood of complaints.

The folks at oldest DIY space of its kind in Texas believe they are “currently the victims of a concerted effort to get places like ours shut down,” Rios writes. “A group of people have anonymously called in false reports to our local fire department claiming that various outlandish things have happened. As a result, we have to make sure the building can pass even the most rigorous of inspections. This will require some repairs and improvements to the building as well as possible fines if we don’t comply within a certain time period.”

Rios writes that a donation of any amount is a good amount.

“We don’t have anything to offer incentive-wise other than a public thank you and the knowledge that you are helping Texas’ longest-running DIY space stay open.”