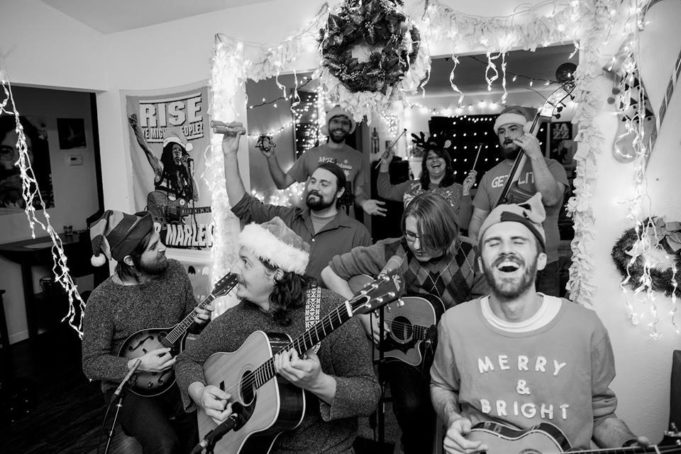 1.) Christmas is coming early for fans of locally sourced Christmas music. Lindby is releasing its fifth annual album of holiday cheer, and you can see the five-piece live at Lola’s Saloon tonight. Last year’s EP featured Leon Bridges and Luke Wade, and this time around, Fort Worth natives The Hendersons are getting all kinds of jolly on the jam. At tonight’s show, ugly sweaters are encouraged. Tickets are only $5, and the doors open at 7pm.

2.) “Holiday Road” by I Happy Am is so full of cheer that it could get the grouchiest Grinch in an eggnog and caroling mood. Download the track for free and add it to your Christmas playlist before the weekend. Throw it on when you need a little pick-me-up or a little extra holiday cheer.

3.) The Crystal Furs have a self-titled album coming out next week with a picture of a cat on it, so you know it’s going to be extra awesome. Last year, the band released a Christmas song, “Christmas is Better with You,” when it was still called Pentacon Six. The holiday tune has been remastered and you can name your price for it on Bandcamp now.

4.) Fans of Sean Russell already know about his new album Brother Bill that he released at the end of November. It’s worth a listen if you’re tired of the same ol’ gospel or if you’re just looking for something new. It’s not quite Christmas music, more like diet Christmas music, but it will still stir the soul and remind you of the reason for the season.

5.) Fort Worth native Leon Bridges brings some much needed soul to Kacey Musgraves’ holiday track. That’s Bridges second mention on this list. It seems like he has a strong affinity for festive tunes. Hopefully that means a Christmas album from the man himself next year. Save this one for when you finally get away from the in-laws, cousins, and parents long enough to spend some time curling by the fire with your two and four-legged loved ones.