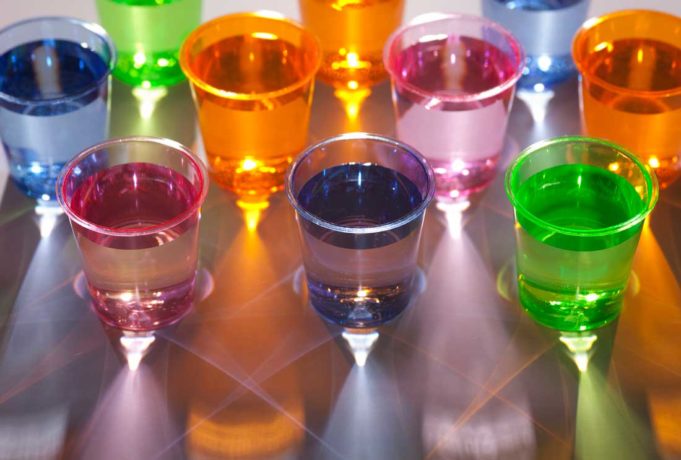 Some friends and I went to Dallas on Saturday to watch the full-band, real-vocals iteration of Euless-based international pop star Steve Gnash, who, fronting the Steve Gnash Experience, was opening for Denton’s sorta-theatric Siamese and Dallas-by-way-of-Fort Worth post-punk act Bummer Vacation. I didn’t drive and was therefore ready for action, and we were at Club Dada for maybe 10 minutes when one friend returned from the bar with five plastic cups full of something reddish.

“Cheap fucks,” he said, distributing the shots. We cheers’d and tossed ’em back.

“Maybe this year,” I pronounced, “I go back to drinking silly-ass mixed shots!”

About 12 hours later, I awoke disoriented, dehydrated, and disheveled on the floor in somebody else’s living room, next to a space heater and curled up in what I suspected was a dog bed.

It didn’t smell like a dog bed, at least, and it turned out to have been the pad from a papasan chair. I mused that I would probably have to do some light investigative work to piece the night together, which would also hopefully reveal the location of my jacket, a garment I originally saw no reason to remove seeing as how the mercury hadn’t climbed above 40 degrees all day.

So that was my Sunday, walking down the steps of a different set of friends’ apartment at 9:30 a.m. to cross the parking lot behind the Boiled Owl and return to my car, pretending to be Columbo if Columbo had to solve a mystery that manifested as a hangover. Of course, I felt crappy, though the degree to which was left to be determined – the sour film coating the inside of my cheeks, teeth, and tongue suggested I had probably vomited up as much as I could, so I probably didn’t feel as wretched as I deserved. And sure enough, as I shuffled across the lot to my car, I saw an embarrassing pile of muck near the Owl’s back door that had, until about six hours prior, roiled within my stomach like a town hall meeting full of volatile malcontents, finally rioting and blasting out my mouth to become a frozen puddle of shame.

The video documenting this unfortunate episode would arrive via text message later that afternoon, and it kind of flipped my stomach to watch – at the time, I was melted into the couch trying to recall all the garbage I’d eaten over the course of my night. My personal inventory counted two slices of post-show pizza from Zini’s smashed on top of the Jimmy John’s sandwich I’d had for late lunch/early dinner, all of which was smothered by a couple of cups of stale popcorn. The popcorn was sort of like packing material for everything else. It happened because we left Dallas with enough time to close down the Sunshine Bar in Arlingfun. Long before that, I’d forgotten my renewed enthusiasm for mixed shots and fallen into my usual brown liquor pattern. Do a few handfuls of popcorn cancel out five or six shots of Jameson? Probably not, but I wanted to give them a chance.

The sun went down, and I forced myself off the couch to turn on some lights. Sometime after that, I found my way into the shower, hoping that the hot water would pound the malaise out of my head and down the drain. And by the time I got dressed to go to Lola’s that evening to drop some cash in the jar for bartender Carrie Hungerford – she is battling cancer for the second time, and the bar threw her a benefit concert to help with her bills while she undergoes treatment – I sorta almost felt like a human being again. Great host that he is, Lola’s owner Brian Forella offered to buy me a Budweiser, and I drank it without any miserable flashbacks, at least until my binge-drinking reptile brain floated the suggestion of pairing the beer with a whiskey chaser. “Or maybe a Cheap Fuck?” I thought. I thanked Brian for the beer and ghosted before I could repeat any of Saturday’s mistakes.