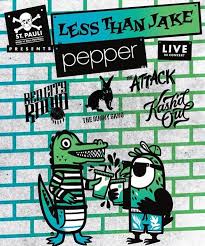 1) “The time for empty talk is over.” This is a quote from the inauguration speech of President Donald J. Trump, now the most successful and powerful purveyor of empty talk in history. Once again, it’s hard to think about shows to recommend because I just watched the ceremony, and if the people are indeed once again the rulers of this nation, as our newly minted President, in all his gauche and loathsome splendor insisted, then America is about to become the stupidest country in the Western world. A government for the stupids, by the stupids, in order to form a more stupid union, forever and ever, amen. Please pass the cranberry dressing, because that quivering column of burgundy, gelatinous blorp makes me think about vomiting, and vomiting is kind of the emotional response my body needs.

Anyway, Lola’s has a “Not My President’s Day” show tonight (Friday), referred to on its Facebook invite as a “classic punk reprise from Fort Worth Rock Assembly 5,” proving that cover bands seem to have an infinite amount of mileage around here. Mean Motor Scooter are playing as the Ramones, Bogus Green are the Dead Kennedys, and Stoogeaphilia’s blasts the past via the hits of the Stooges, MC5, Pere Ubu, and Dead Boys. Cover’s $10. Here’s the classic punk I’m feeling today:

2) Third-wave ska-punk veterans Less Than Jake are at the Gas Monkey Bar and Grill (the outdoor Gas Monkey, not the one by the movie theater) on Friday night as well, along with Hawaiian-born, reggae-vibing pop act Pepper. Wanna hear about how I saw Less Than Jake several times when I was a teenager? No? Good, because they are not very interesting stories. I used to like Pepper, too, but the less said about that, the better. I’d probably still enjoy seeing them live. Check out this full Less Than Jake set from the Warped Tour ’97:

3) On Saturday, the Fort Worth Women’s March begins at the Tarrant County Courthouse downtown at noon, and it’s supposed to last until 3pm, which gives you a few hours to drop by Girl Gaze, the pop-up gallery showcasing female artists; in addition to enjoying unspecified “music,” you can view works by Brie Underhill, Betsey Gravatt, Alex Stock, Lita Bush, Elizabeth Ashley Johnson, Jana Renee, Olivia Cole, Kelsha Spencer, Lindsay Ellary, Andrea Belmontes, Monica Wright, Kate Stipp, and Brittany Shaban. Per the invite’s copy: “In a world where perspective is dictated through the male gaze, this show offers a tongue in cheek insight into girl world through a balance of both beauty and discomfort.” The gallery, popping up at 1812 Clover, is in a residential neighborhood, so don’t be an ass about parking; the show lasts from noon to 6pm. Sorry this video explaining Male Gaze theory is presented by a man, but it sounds like a pretty even-handed explanation to me:

4) Twin Cities rap duo Atmosphere headlines the Bomb Factory Saturday night. What more do I have to tell you about that? They’ve been in the game for almost 30 years now. One time, I read an interview with Atmosphere’s Slug while they were on the Warp Tour, and he described the headlining acts (the pop-emo boy bands of the early aughts) as “Taking Back the Story of the Yellowcard,” a joke that still makes me laugh 15 years later. If you’re way into rap, this is a show you shouldn’t miss. Watch this video. See? You should go to this show:

5) Finally, the Grotto has a songwriter-oriented night on Saturday, headlined by Carey Wolff and the Morning After, and featuring Larry Hooper and the Reserves, and Jacob Furr. These guys have heartache and melodies for days, and if national affairs have you feeling a little world weary, this is the kind of show will probably be therapeutic for you. Here’s Jacob Furr live from Magnolia Motor Lounge: