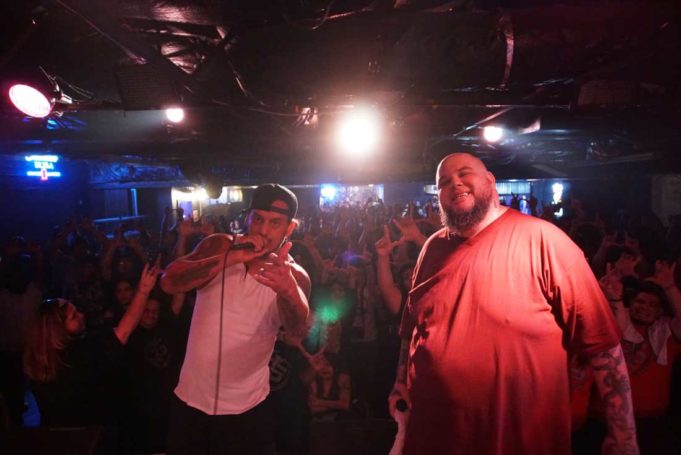 What do you know about the West Side? Do you think it’s all meth and metal bands, gypsies and strippers, card rooms and vagrants? Sketchy stories about the Ridgmar Mall? Maybe you’re not far off. But you don’t know until you’ve been over there.

Tomcats West is a good example of what you might think you know about the West Side. It’s third in a row of dives directly across Alta Mere from its big sister bar, the cavernous heavy-metal haven known as The Rail Club. Tomcats is one of Fort Worth’s most underrated venues, with good sound, a spacious stage and staging area, and plenty of room for fans to cram in front of bands and even more room for others to shoot the shit in the back.

But, yes, Tomcats West can also be West Side af. If the club has the right bill, the show will manifest most of your assumptions about West Fort Worth. And on Friday night, the club had the right bill: the inaugural Unforgiven Live concert, the first of what headliners the Immortal Soldierz intend to turn into an annual Cinco de Mayo party. I saw platinum grills flashing out of grins as rappers and their homies walked around pushing CDs. Some fans walked around vaping weed, despite the presence of a lot of little kids. One of them was a baby in a bassinet stroller.

Immortal Soldierz had put together a lineup of a dozen local rappers to open the show, plus a couple guest stars – Luni Mofo’s appearance during the Soldierz’ set was apparently a big deal because he’d recently gotten out of an extended stay in jail, and a dude name Thyra joined the Soldierz on the third or fourth song to the crowd’s excitement.

The crowd’s excitement, however, was reserved. How many times should a rapper have to ask the crowd to make some noise? Maybe the crowd would be more ecstatic if the rappers didn’t rap over their own vocal tracks. Can’t y’all just mute the vox and flow with the beats? But despite that frustrating quality, most of the acts were pretty solid. In particular, Lil Cas was a showstopper, taking the stage like a narco corrido version of Daft Punk, with his blinged-out white suit and with his cowboy hat shadowing his chromed hockey mask, spitting tough-ass rhymes in Spanish and English as his hype-man waved a huge Mexican flag.

Right before Immortal Soldierz went on, I went to take a piss. The bathroom was crowded, and as I waited in line, this chick came blasting in because the line to the ladies’ room was too long. The guys in the men’s room let her cut in front of them, but she had to wait for the stall. Twenty seconds later, the stall door opened, and a dude and his chick exited hand-in-hand to thunderous applause.

That experience was a tough act to follow, but Immortal Soldierz brought it all the same. The crowd packed in and threw up the rappers’ “U” sign (for their label, Unforgiven Records) as Scotty B and Renizance flowed through choice tracks from their latest album, The Collab Sessions. When they exhorted the crowd to make some motherfuckin’ noise, the crowd exploded. Before I knew it, their set was over. The crowd started to disperse as the soundguy put on some death metal, at which time the crowd reconvened but this time into a huge brawl. Though the Tomcats staff didn’t seem too stoked about the fight, I felt like I got my money’s worth. Can’t wait for Unforgiven Live Numero Dos.

From 6 to 11pm on Friday, the Botanical Research Institute of Texas (1700 University Dr, 817-332-4441) is celebrating its 30th year by hosting a bash with 1100 Springs, the Joey Green Band, and the Dick Beldings. VIP admission ($50 per person) to what BRIT hopes becomes a regular event comes with complimentary appetizers, a taco/fajita bar, two drink tickets, air-conditioned bathrooms, swag, and more. Otherwise, the cost is $10 for members, $20 for non-. Anything $30 or above is tax-deductible. Amenities for purchase onsite include undoubtedly delicious food from Gas Monkey’s David Hollister, adult beverages, and t-shirt printing by Trust Print Shop. Interactive games, including Giant Jenga and cornhole, and a Photoholics Photo Booth with props will be free. We’ve got two pairs of tickets to give away to the fifth and seventh emailers to jessica@fwweekly.com. Bring a blanket or a lawn chair, but keep the furry friends at home. See ya there.