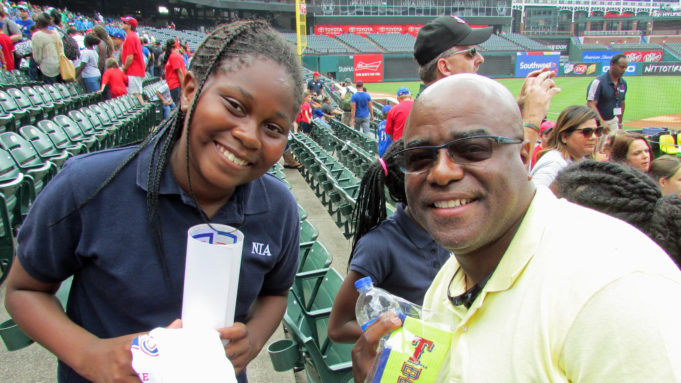 Thursday before the Rangers game, I put a snack cake on Rodney Gadsden’s head.

OK, I didn’t actually place it there. That job fell to a girl named Tochi Zama Emeruen. Both fans had come to the game expecting to watch the Rangers go for a sweep of the Phillies and also learn about how weather works. Instead, they found themselves on the visiting dugout, engaged in hijinks.

“It was unexpected,” said Gadsden, who had come to game as a chaperone for his daughter Sierra’s school field trip.

Every year, the Rangers team with the meteorology staff at CBS-11 for a pregame event designed to teach schoolchildren about how weather phenomena work. Getting thousands of youngsters and adults seated before the show starts is by its nature somewhat of a drawn-out process, so I have traditionally assisted team mascot Rangers Captain in performing games and skits to warm up the spectators as they file in. Rangers Six Shooters help us select likely candidates to join us atop the dugout.

We usually have a lot of raised hands from which to choose. A couple of Six Shooters pulled Rodney and Tochi from their seats among the Newman International Academy traveling party. They had no idea what they were in for.

They would compete against two other pairs in the morning’s first game – snack cake stacking. Each adult had to kneel down and each kid had to unwrap a set of chocolate snack cakes and place it on the kneeler’s forehead. The first to successfully balance four total treats would win.

Tochi, who, like Sierra Gadsden, attends NIA, allowed that she was nervous. She doesn’t like to get up on stage and had never done this before, although, let’s face it, pretty much nobody has ever done this sort of thing before. It turns out she’s a natural snack-cake-piler, though, as she finished first. Rodney did his part by making an effort to “just stay still and let her do what she needed to do.”

A young lady named Caroline followed Tochi’s effort by managing to stack three apples in a few seconds (something Rangers Captain and I really didn’t think could be done). The final game involved kids pulling all the facial tissues out of a box with one hand and then it was time for the weathermen and women to do their thing.

“It was pretty interesting just to be a part of their fun and excitement,” said Gadsden afterwards. When you go to a ballgame, there’s always more to it than just watching the on-field action. You could end up on the kisscam, or try some new food concoction, or find yourself on the dugout with the mascot and thousands of people watching you as you attempt to pile sugary confections as skillfully as possible.

Rangers Captain and I agreed that these contests worked as well as any we had done, so expect to see more like them if you attend the Dallas Zoo’s Wildlife Education Day at the ballgame on June 22, or if you return to Weather Day next season.

One attends such events to do stuff one can’t do at home. For Tochi, that was the best part of her snack-game experience.

Disclosure: The Rangers pay me to help plan and execute Weather Day festivities.