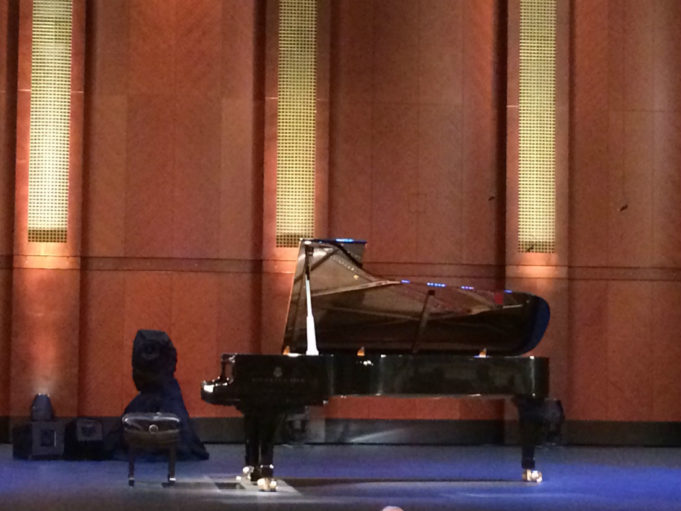 As usual, the Van Cliburn Competition runs through Memorial Day. As always, I take a moment to reflect on how cultural events such as these are only possible where there is peace and security. For their part in providing this, we thank our servicemen and women.

All three pianists named Kim survived the preliminary round, and it reminds me of the 2002 World Cup soccer tournament, where the South Korea team fielded five players named Lee. That team made a deep run in the tourney, and the Spanish-language announcer on Univision gave up and started referring to the Lees by their jersey number. (“Lee 15 gives it to Lee 10 down the left side. He passes to Lee 14…”) You can find explanations of why Koreans have so few surnames online.

Kim Su-yeon is first up for this marathon quarterfinal session. She plays Schumann’s Kreisleriana, and it seems to suit her better than anything she’s played so far. She gives a sturdy reading, doing full justice to Schumann’s autumnal lyricism. The piece was inspired by a character created by E.T.A. Hoffmann, and while the pianist could infuse the reclusive, painfully sensitive Kreisler with some more wildness, she still comes off quite well here. From my experience as a film critic, I know that half of actors’ experience is choosing roles that fit them. It’s much the same with classical musicians, who come off better when they choose music that fits their personalities and talents rather than what might please a judging panel. She concludes her recital with Liszt’s Vallée d’Obermann, which has nothing to do with Dobermans but whose title comes from a novel by Étienne Pivert de Senancour about a man who wanders a mythical valley in search of a purpose in life. Kim S.Y. has trouble with the discursive early parts of it, and seems to be trying to make Liszt sound like something else. She does slip firmly into the idiom during the virtuosic passages later on in the piece.

Also playing Liszt is Leonardo Pierdomenico, who seems to have a better feel for it. He plays the turbulent Ballade No. 2 in B minor, tossing off its growling left-hand runs and bringing it to a neat conclusion. His other recital item is Rachmaninov’s Variations on a Theme by Chopin. It’s the second set of variations he’s played in this tournament, and he gives distinct character to each of the variations that the Russian made on Chopin’s Prelude in C minor while making the piece’s structure clear so that the C major resolution to the piece feels earned. My positive first impression of him has grown.

Ilya Shmukler gives an imposing reading of Busoni’s transcription of Bach’s Chaconne in D minor, with the piece retaining its Bachian character while being embellished with the sort of pianistic flourishes the 19th century would have expected. Shmukler plays it with an iron certainty. After playing Ravel in the prelims, he goes back to the well for Pavane for a Dead Princess, but this time it doesn’t give him as much water. He doesn’t convey the piece’s deep sadness. He gets Trois Mouvements de Petrouchka off to a blazing start, but loses some of the flavor once he gets to “Chez Pétrouchka,” the second movement. His performance has plenty of forward momentum, but some of the excitement seems to leak away. It’s still a good performance, as Shmukler makes the piece’s unreal technical demands seem like child’s play and gives the piece the proper sheen.

Kim Da-sol does a masterful job with Scriabin’s Fourth Piano Sonata, holding back at the beginning of this one-movement work only to unleash the exploding, violent colors at the end. I’m less enamored of his set of Chopin’s 24 preludes. They have some inspired touches, like his instinctive sense of phrasing during the tricky A minor one, or the reverb in the bass on the tiny C-sharp minor one, or his singing line in the A-flat major one. Still, I don’t come away from any individual prelude thinking, “Wow, that’s a gem!” I tend to value that more than the uniform consistency that Kim D.S. brings to it, but it’s still a set that he can be proud of.

I wasn’t so high on Tristan Teo during the prelims, but this is his second chance to impress me (or my second chance to discover I was wrong about him, if you like). The Canadian does a fine job on Bach’s Toccata in D minor. He performs Gaspard de la Nuit and does quite well on “Ondine,” while his inconsistent “Scarbo” nevertheless shows he has an idea of what the music is about. His “Le gibet,” on the other hand, is too slow and too pretty. People, we do realize that the piece is based on a poem about a dead guy decomposing on a baking hot day, right? We should probably play it accordingly. On the other hand, Nikolai Kapustin’s open-hearted, jazzy Variations seems to come from a genuine place within Teo. The work would have more impact if his Gaspard had been as dark as it should have been, but it’s still awfully welcome in his program and this competition.

There are no competitors this year from the Spanish-speaking world, so Martin James Bartlett of Hornchurch, Essex is bringing the Spanish flavor in his quarterfinal recital. He starts with two sonatas by Domenico Scarlatti, the Italian composer who spent most of his career in Spain and Portugal working for the royal families of those countries. Bartlett plays those with every note as well-laid as the cobblestones on the streets of Seville, and follows it up with “El amor y la muerte” from Granados’ Goyescas, a ballad where he achieves moments of aching poignancy. After that, he plays Liszt’s transcription of Schumann’s “Widmung,” which Jurinić also performed last night. Bartlett does the better job, but I still wonder why Liszt bothered to transcribe this when it works so well as a song. (He should have transcribed Schumann’s Frauenliebe und -leben, which has sublime music set to appallingly sexist words.) Bartlett ends his program with Prokofiev’s Seventh Piano Sonata, and while he demonstrates that he can play softly when he’s so inclined, he prefers to make a grand welter of sound with the piano. So do I, but sometimes that comes at the expense of the music. This terrific young talent simply needs to figure out how to pick his spots better.

If you gave a recording of Daniel Hsu’s performance of the Bach-Busoni Chaconne along with Shmukler’s performance of it from earlier today to a casual fan of piano music and didn’t tell that person who was playing, they’d still probably be able to tell which one was Russian and which was American. Shmukler’s version is heavier, more colorful, more emotional, while Hsu’s is clearer, more streamlined, more direct. Which one you prefer is up to you, but they’re both quite good. Hsu’s other recital item is Mussorgsky’s Pictures at an Exhibition, giving different colors to the Promenade as it recurs throughout the piece. He does particularly well by the alternating notes of “Limoges” and the grotesquerie of “Baba Yaga” (with a nice change of pace during the slower middle part). He then conjures up magnificent blocks of sound during “The Great Gate of Kiev,” the finale of the suite, which brings the audience to its feet.

What the hell happened to Yury Favorin? The guy who dazzled the crowd in the first round with his performances of Prokofiev and Tchaikovsky has been replaced by a lookalike who plays a version of Bach-Busoni’s “Ich ruf’ zu dir, Herr Jesu Christ” (“I call on you, Lord Jesus Christ”) that sounds anything like a desperate cry for divine intervention. Favorin’s version of Rachmaninov’s Corelli Variations comes and goes without making any impact of note, and he makes total gobbledygook out of Scriabin’s Tenth Piano Sonata. Granted, late Scriabin is tough to get into, but I expected way more from this Russian player, who fails to make sense of this work whose myriad trills hang in space like pulsars. The show horse in him finally reappears with his last item, Liszt’s Scherzo and March, where he swats away runs of double notes like they’re gnats. It’s good to see that that guy is still in there, but his impression of a musician capable of weightier things doesn’t fool me.

I’ve now sat through two recitals by Sun Yutong, and I can’t come up with anything that he does well. He rushes through Chopin’s Impromptu No. 1 and misses its playful spirit, while his interpretation of the composer’s Ballade No. 1 lacks the bottomless sorrow that animates the piece. He follows that up with a tick-tock version of Bach’s Prelude and Fugue in E-flat minor, and he even manages to make Ligeti’s technical showpiece L’Escalier du diable (“The devil’s staircase”) into something dull. For me, that’s the most impressive thing he’s done so far. Some fireworks late in the last movement of Bartók’s Piano Sonata come too late.

Our hopes for saving the evening session rest on Luigi Carroccia, who gets off to a wobbly start with Chopin’s Barcarolle. Some of history’s greatest pianists have found ways to mess up this piece inspired by the songs of Venetian gondoliers, and Carroccia manages it by being too brash for a quiet ride down the canals. He finds his footing with two nocturnes by Chopin (Op. 62), which he plays with aristocratic grandeur and that glorious singing tone of his. His other two recital items will make piano teachers smile. Carl Czerny’s Variations on a Theme by Rode is a work by an Austrian composer who was a pupil of Beethoven and a teacher of Liszt. A wildly prolific composer, Czerny wrote technical studies that are still widely used by pianists today (I still have my copy of School of Velocity from my childhood), but his music is seldom played publicly. Carroccia didn’t quite convince us that his set of variations on a French composer’s theme was worth us listening to, despite some pretty playing. The pianist fared better with Dmitri Kabalevsky’s Rondo in A minor. Kabalevsky was a much-feted composer during the Soviet era, but now he’s mostly remembered for the many pieces he wrote for children to play, which teachers frequently give to students who want to learn something modern. Kabalevsky’s music for grown-ups may be largely forgotten, but Carroccia puts forth a strong case that this tense, technically difficult rondo is worth digging up.

That’s it from me for this round. I’m afraid I’ll have to miss tomorrow’s action with my other duties at the Weekly, but I’ll post the names of the semifinalists when they’re announced, and I’ll be back with a recap of Thursday’s performances, so watch this space. 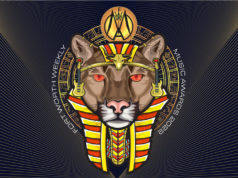