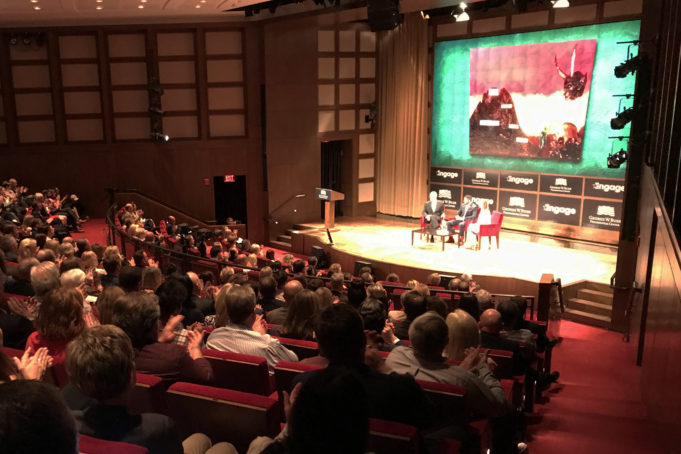 Last Monday, a former serviceman had an exceedingly rare opportunity to ask a former U.S. president a question. The veteran decided he would inquire about baseball.

The next night, I attended another event with vets present. I got to talk to one of them, a recent interview subject of mine. He had a distinguished pro football career, but it was one he had deferred to first fly combat missions in the Persian Gulf.

All these cues reminded me that sports and military service are inextricably intertwined. For one thing, the two pursuits reward many of the same traits, including toughness, fitness, and team spirit. That a Chad Hennings (the former football player I mentioned above) could help the Cowboys win three Super Bowl rings makes a certain degree of sense. That he would continue to be involved in military causes, in this case the Airpower Foundation‘s Sky Ball, would also seem logical.

Sports teams have long embraced opportunities to use their venues to recognize the various branches of the military. The Rangers play the Rays tonight and they will no doubt do their usual memorable job of honoring servicemen and women. Teams all over the country will do the same, and their efforts will not be limited to a single important holiday, Memorial Day. We see outreach to the armed forces in some form or fashion on a nightly basis from many (and maybe all) U.S. teams.

The freedom to enjoy diversions like sport is ostensibly one of the things for which soldiers fight. The man who asked George W. Bush about baseball wanted to know the ex-commander-in-chief’s opinion on the Rangers (Bush thinks they’ll rally once Adrián Beltré, Cole Hamels, and Tyson Ross get healthy). The program at the Bush Center that night involved a presentation about the former president’s book of paintings and came after a day of golf for a number of wounded warriors. Bush also helps support the Invictus Games for injured veterans, rides mountain bikes with them, and clearly sees a role for sports in their recoveries.

In a perfect world, they wouldn’t need to recover, but we unfortunately don’t live in one. Pundits can debate the merits of specific foreign policies and whether they truly help or harm the cause of freedom. What is not debatable is that we hope every individual who travels abroad to fight returns safely to watch his or her favorite team or participate in his or her preferred pastime. On Memorial Day, it is important to remember those who have sacrificed. It is even better to be able to go to a ballgame with them. First pitch is 7:05.