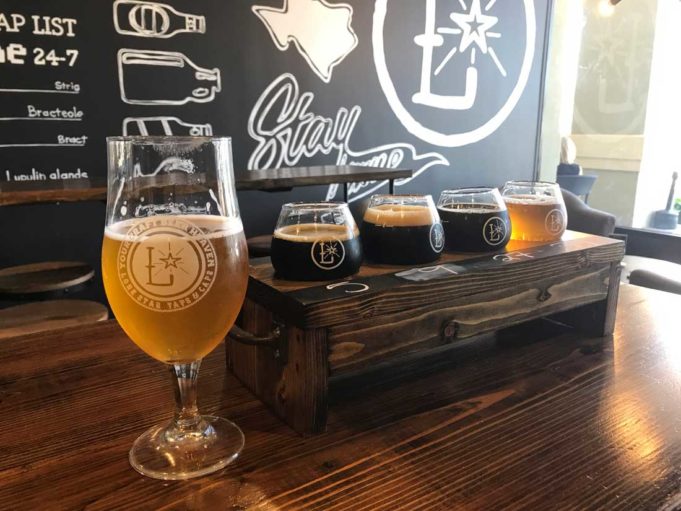 My first sip of beer was a lukewarm Old Style, surreptitiously swiped from my dad during a particularly sunny day at Wrigley Field. I promptly declared it disgusting and vowed to never drink a beer again as long as I lived. Or until the Cubs won the World Series, whichever came first. As you can guess, I broke that commitment a lot earlier than 2016.

Back in those bygone days, you had one choice for beer at a Cubs game, and outside the gates there weren’t many more options. Most people drank Schlitz while wiping off their sweaty post-lawnmowing brow or downed skunky PBR in joints with questionable health code ratings.

But the current hand sanitizer-reared generation has different demands for the cleanliness levels of a bar. Many modern-day drinking establishments are so sterile, they could double as an offsite surgery theater for UNT medical school. Nowhere has this change from the grittier days felt more apparent than at Lone Star Taps & Caps.

The overall vibe of this growler fill station and craft beer bar was like stepping into an obsessively clean and boozy Chipotle. Interior design elements featured mostly black and stainless steel, with a bit of wood to give the appearance you aren’t drinking inside a commercial kitchen.

Inside the front doors, an aisle corrals visitors into an orderly line. One side of the walkway is lined with coolers, and the other ha short shelves stocked with non-refrigerated options. Both are available for drinking inside or to take home. At the counter, an employee is there to take your order, offer advice, prepare the tap selections you choose via a digital menu board, and ring up the purchase.

For this slightly reformed tech geek, it wasn’t the overall super-clean interior and selection options that got me giddy, though. Lone Star Taps & Caps employs a draft inventory management system called Digital Pour that populates screens above the order station with an up-to-the-second list of all the brews available on tap, their various prices, tasting notes, and exactly how much is left per keg. This same list is accessible via a mobile app, Facebook, and the place’s website, thereby enabling you to know before you go that they have only a few pours left of Cobra’s All Eyez On Me Russian Imperial Stout.

This highly sophisticated system for purchasing also made it easy to mix and match types, styles, and quantities. Pricing was set by the 4-ounce tasting-size pour, a four-beer flight, a standard pint, and 32- and 64-ounce growlers. The prices of these beers rival any of the craft-brew-specific bars in Fort Worth. I’m a fan of sours, especially when it’s hotter than hell outside, so thanks to the tasting notes on the board and the opinion of the Taps & Caps checkout guy, I snagged a pint of NOLA Humid Nature Sour Ale with citrus. It was an outstanding choice.

There were the requisite flat screens hovering above rows of long tables with stools. The patio facing Camp Bowie is dog friendly, and the bar doesn’t serve food, but you can bring in outside sustenance. (May we recommend a theme-appropriate Chipotle steak burrito?)

What Lone Star Taps & Caps may be lacking in initial warmth, it makes up for in overall experience and value.