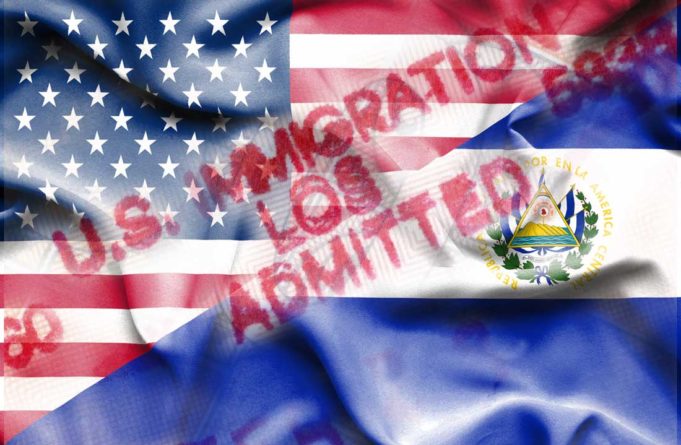 Despite his legal status as a U.S. citizen, a local restaurant owner whose parents are from El Salvador did not want his last name or the name of his business used when talking about January 8. That’s when the U.S. Secretary of Homeland Security announced the end of the Temporary Protected Status for Salvadorans living legally in the United States.

“This is really, really, bad,” he told me. “The whole Salvadoran community is terribly frightened. They can’t believe it, but what’s coming is going to force them into the shadows because they are not going to go quietly back to El Salvador. They might have roots there, but after living here for 15 years, this is where they have made their lives.”

Unless something changes, by September 9, 2019, nearly 250,000 U.S. citizens from El Salvador will either leave the United States on their own or be deported back to El Salvador.

“There is no reason that the TPS for El Salvador was cancelled,” said Bethany Carson, an immigration policy researcher with Grassroots Leadership, a nonprofit working to eliminate private prisons and help create humane immigration policy. “While the circumstances that initially provided the TPS to El Salvador have changed, anyone looking at the conditions in El Salvador today can see that it is not safe to send these people back. They are being sent back to danger and, in some cases, death.”

Temporary Protected Status is a federal mechanism by which people from a given country are allowed to stay in the United States legally — and apply for permission to work legally — if they are under imminent threat of violence or suffering from extreme natural disasters. El Salvador was granted that status in 2001, following two major earthquakes that killed more than 1,100 people and displaced more than 1.3 million of the county’s 6.2 million inhabitants. In the aftermath of the earthquakes, widespread civil unrest, extreme poverty, and violence erupted, which caused the United States to renew the TPS continually until the January 8 announcement. It was the latest in a string of TPS cancellations, including Haiti and Nicaragua, with strong indications from the administration that the program will soon be ended for Honduras and Somalia as well.  Those cancellations are a reflection of Trump’s overarching view of immigration, which began the day he announced his candidacy for president when he said that Mexico was sending criminals and drug dealers to the United States and continued last week when he referred to Haiti and several African countries as “shitholes” during a meeting with staff and senators at the White House.

But while termination of protected status is supposed to occur only after conditions have improved to the point where those living in the United States can return home to a safe environment, that’s not the case in El Salvador.

Since 2001, El Salvador’s living conditions have deteriorated dramatically. The country is now considered one of the most dangerous places on earth. Its murder count is the highest per capita in the world. The two major street gangs –– Mara Salvatrucha, or MS-13, and their rivals, the 18th Street Gang –– murder, rape, kidnap, extort, and torture helpless citizens with impunity. Corruption is rampant at every political level and police protection spotty, at best.

According to the Organization of Salvadoran Woman for Peace, at least 1,200 Salvadoran women and girls in El Salvador vanish each year. It is a horrifying number but one that could grow exponentially if a sizeable portion of the 250,000 Salvadorans here are returned home.

“What is being so casually discussed in Washington,” said Jonathan Ryan, executive director of RAISES, a nonprofit representing immigrants and immigrant communities, “are the lives of hundreds of thousands of people who will return to a place that means certain death for a portion of them. Those not facing death will certainly be vulnerable to extortion, kidnapping, and other horrors at the hands of drug gangs who will easily identify those people who have been living in the United States for so long and will be assumed to have money and valuable goods.

“That this does not cause outrage in the American public is amazing to me,” Ryan continued. “If another country was going to deport this many people into a situation of extremely violent conditions, the United States would be up in arms. But we are granting ourselves permission to disregard those principles on which we built our reputation and worldwide authority for the past 70 years.”

More than 36,000 Salvadorans live in Texas, according to Homeland Security. Thousands are thought to live in North Texas, though Homeland Security, which has the numbers, did not return calls for this story.

Fort Worthian Philip estimates that a good portion of his clientele are living under the protected status. “I’m looking out over my dining room right now, and there might be half my clients under that status,” he said. “They have homes, they have their own businesses, they pay taxes, and now what? Send them back to a place — and I go twice a year, so I know firsthand — that is just rife with drugs, violence, corruption, and racketeering? And if that happens, what happens to my restaurant? I employ two-dozen people. But if I lose a good portion of my clientele, I’ll close, and then those employees are going to be out of work as well. And then my suppliers will be short a client. I don’t think anyone in the administration actually though this through. In Fort Worth alone, you are going to see whole neighborhoods vanish.”

Manuel, who also did not want to be identified, owns a small trucking business in Fort Worth and is living under the temporary protected status. “Look, me and my cousins worked real hard to get our first truck. Then our second. Now I have seven with seven different drivers and people who work in the office with me. My cousins own three or four trucks each. What happens to us? We just sell the trucks, go back to El Salvador, which none of us has lived in since we were kids, and get extorted for everything we have? Or killed for it? Our parents left El Salvador during the civil war in the 1980s with the hope of a good life here. And they made it. But there is nothing for immigrants to look for here in the U.S. anymore. Not just for El Salvadoran people but for any immigrant.”

Lon Burnam, a peace activist and former long-time representative of Fort Worth in the State House, cannot fathom why the Trump administration would choose to end TPS for El Salvador. “What Trump doesn’t realize is that the 250,000 people he wants to send back to El Salvador are not only paying a lot of taxes here, but they’re spending money on cars, homes, and everything else that goes with living. And they are also sending back a boatload of money home to El Salvador, money that helps stabilize that country and prevent famine there. It’s almost unfathomable to imagine that you want to take hundreds of thousands of people off the tax roles and send them to a country where there are no jobs. Those people will have no economic options but to join the black market culture there, which will exacerbate the drug issue here. I could go on, but you get the picture. There are just so many things wrong with this.”

It’s simply an irrational policy, Ryan said. “It’s the destruction of hundreds of thousands of lives for the sake of advancing a xenophobic and racist agenda. This is not just about El Salvador. It is a message to all refugees that they are not welcome in the United States.”