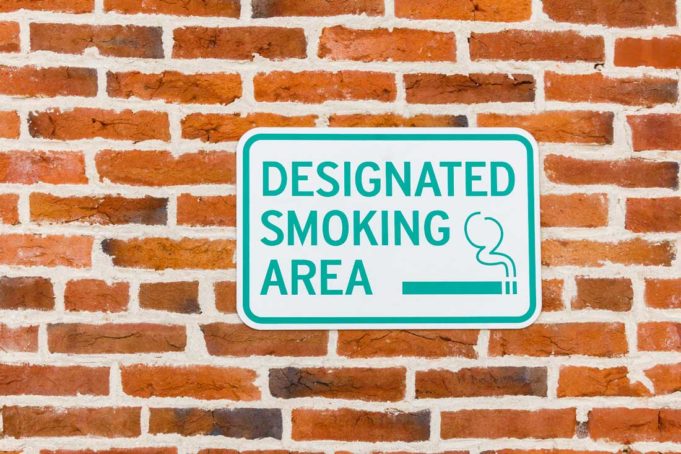 Though the following two paragraphs didn’t actually make the final copy, here’s what I wrote about the new smoking ban for Fort Worth Weekly’s March 14 issue:

“By the time this issue appears on the internet and in the wire carrels at your favorite hamburger-and/or taco-filling stations, up-market grocery stores, and beeratoriums, the new, extended version of Fort Worth’s smoking ordinance will have been in effect for two whole days, meaning that since Monday, March 12, smokers will have had to go outside bars and bingo halls to partake in their most cherished personal vice, leaving the rest of us to enjoy alcohol (and bingo cards) without the noxious cloud of someone else’s bad choice drifting through the room and chemically bonding with our clothes, hair, skin, and eyeballs.

“I’m writing this on Monday, and I obviously can’t predict with absolute certainty what life will be like two days hence. But I bet the world will not have ended just because smokers will be forced to move outside for a few minutes. I bet people are still going to bars. And I bet that even if the ordinance’s new statute prohibiting smoking within 20 feet of an entrance precludes drinkers-who-are-also-smokers from bringing their beverage outdoors while having a cigarette, I predict they’ve already adapted, perhaps by finishing their beers before going outside or maybe even by deciding to quit smoking altogether. Because, let’s not forget why we go to bars in the first place: to drink.”

Six weeks have passed, and to my knowledge, not a single business has folded in the ban’s aftermath. Life in smoke-free Fort Worth seems to be carrying on at its usual poky, Cowtown-y clip. For my part, as a nonsmoking bartender who works at what was once one of the smokiest bars in town (the Boiled Owl Tavern), the absence of smelly, poisonous particulates has made me happier to be there, and I’m exceedingly grateful to work a job I enjoy finally minus the part of it I hated. And for all the poorly spelled, anti-ban Facebook invective – commonly speckled with half-baked libertarian tropes about the government controlling our lives and ruining free enterprise – sales have actually come up a little. The increase in receipts hasn’t netted dramatic numbers, but in my own count-the-bodies-in-the-room experience, there are more people walking through the door now that the air is clear.

I spoke with some bartenders who work at watering holes other than mine. I’m leaving them anonymous because their opinions might not toe their employers’ official lines, but one told me that people he hadn’t seen in 10 years had started coming around again because smoking was banned. The other said he’s seen a lot of new faces who’d never ventured in because of the smoke. A third told me that at least she was “spending a shit-ton less on cigarettes.” Like the inside wrapper of a pack of Marlboros, silver linings all around, right?

Most bars have tried to accommodate their smoking regulars as best they could. Off the Record put a fence around its façade, forming a front-side patio. The Chat Room Pub placed TVs beneath the roof of its patio. Even A Great Notion, that ancient, tobacco-cured Westside lounge so near and dear to my heart, whose regulars are older and less amenable to an upheaval of their daily routines, continues to thrive. They tried a patio in the back, but it proved to be too comfortable, and the people hanging in the back drew complaints from the neighbors behind the bar. Now they have a table and chairs in front of the building.

The biggest change I’ve observed happened at Finn MacCool’s, which underwent a fairly extensive remodel to attract smokers, effectively creating an in-building open-air patio by sealing off the game lounge with glass windows and a door and replacing an entire street-facing wall with ornate metal gates that allow the outside air to ventilate the room. I’m sure the renovations were expensive, but I admire the owners’ creative approach to obliging all their customers. If you miss being able to smoke while you shoot pool, Finn’s smoking lounge is still the place to be.

Of course, this city is still full of people adverse to change, and a lot of those people might still fume over being made to smoke outside. But seeing as how a majority was needed for this new ordinance to pass, I think most of us bar-going folks are glad to move forward.