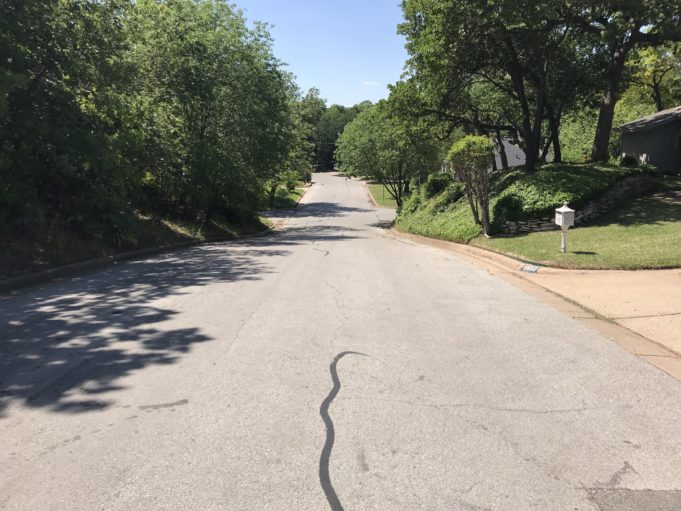 It was the worst bike wreck I ever had. We used to careen down the hill at top speed, and one day my red Huffy (I think it was a Huffy) couldn’t handle the velocity. Or maybe there was operator error involved. In any case, I returned home with skinned knees, elbows, and whatever other innocent areas the unforgiving pavement had managed to infiltrate and punish.

Man, was that hill steep. A veritable Everest on the east side of Fort Worth.

Except, actually, it wasn’t.

I discovered the truth last weekend. I had gone to Quanah Parker Park off Randol Mill near the river to check out a new trail section for a piece I was working on for the Fort Worth Convention and Visitors Bureau. Once I got done scoping it, I wasn’t totally gassed and thought it might be fun to ride back through the neighborhoods where I grew up.

My earliest memories come from a one-story on Brentwood Drive, near where East Loop 820 intersects what used to be the Dallas-Fort Worth Turnpike (we now just call it Interstate 30). My family lived there until we relocated to Wedgwood when I was in high school. My dad taught me to ride on Brentwood at the age of five, and my friends and I thoroughly explored the neighborhood and beyond in quest for books or arcade games or tennis courts, or sometimes just to get to each other’s houses to play with Batman action figures or discover rock-and-roll on an old turntable.

The neighborhood hasn’t changed a lot, I found as I wheeled through on two wheels for the first time in decades. Middle-class families still work in their yards, although there are a few more of them now since a housing development overran the vacant field where our Mag Scramblers used to displace the dirt.

What had changed, though was the southbound hill that culminates in the intersection of Rockhill and Chimney Rock. It was a lot smaller and a good deal less sheer.

Of course, the hill hasn’t changed. It’s me who has grown, and no doubt perceive a lot of things differently than I did before I reached beard-growing age. 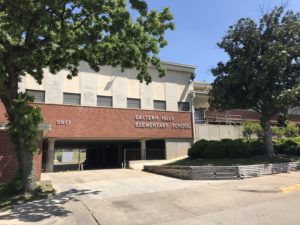 Next week is Bike to Work Week. My friends and I attended Eastern Hills Elementary School and we rode our bikes to work there as patrol boys or math students or four-square players. When I rode by the alma mater this time, it looked the same (maybe a little smaller).

My outlook also remains the same on the benefits gained by pedaling all over the place looking for baseball cards or comic books or some goal we hadn’t yet decided. I’m still friends with my best childhood cycling companions, and I continue to enjoy the sport of cycling along pathways both unexplored and familiar – even if I’m not headed to the comics store or to hit tennis balls off the wall of a nearby church. I’m not much of a “things were better in my day” sort – I like my smartphone – but I wonder if modern kids don’t get to experience unstructured freedom to explore and learn. If not, it’s too bad. Skinned knees can have lasting benefits.