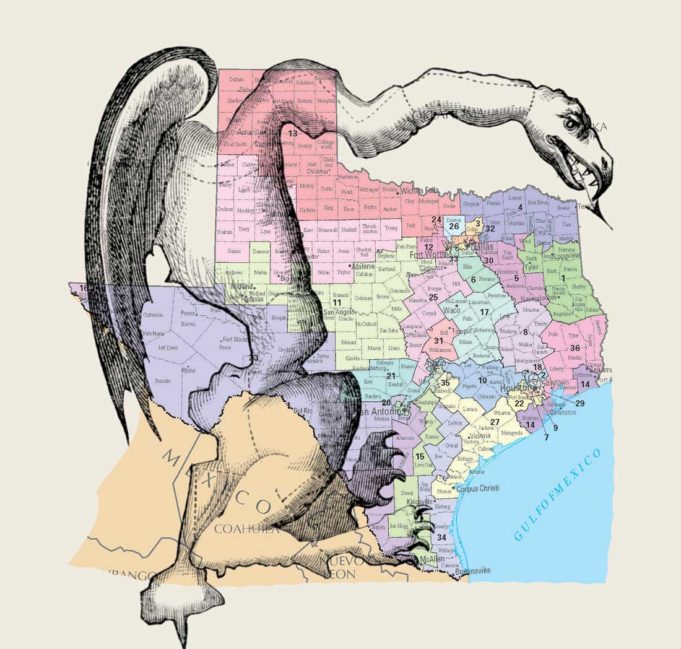 In “Gerrymandering Texas-Style” (Mar 21), I somewhat ribbed Texas for its lowly non-first place in the roll of gerrymandering dishonor. It is probably a coincidence, but since the article was published, our elected members in Austin appear determined to do everything possible to “improve” their standing on said roll. Of course.

Texas lawmakers kicked the gerrymandering case upstairs, to the U.S. Supreme Court, asking them to reconsider a lower-court ruling that found current election boundaries diminished the strength of the black and Hispanic vote. The whole gerrymandering argument has been rocking back and forth between state legislators, federal courts, and the highest court in the land since 2011, when the existing gerrymandered districts were drawn after the 2010 census. Ever since, there have been multiple boundary drawings, court rulings, and re-drawings that seem to have achieved only a unity of discord. In short, nobody is happy with the way things stand.

As we edge toward the November midterm elections, the Supreme Court is being asked to deliver a definitive ruling and has begun hearing Texas’ appeal. A decision is not imminent. Precedent suggests that the high court — which has never struck down a voting district on the grounds of partisan gerrymandering — will not rule to uphold the lower court’s ruling. Additionally, it currently has a 5-4 conservative bias among chief justices. Liberal hopes rest, as they often do, with Justice Kennedy, whom reporters have described as “noncommittal” thus far during hearings on the matter.

Two Tarrant County House districts — 90 and 93 — were “flagged by federal judges for intentional discrimination,” according to the Star-Telegram. The upshot is that HD90, which includes the heavily black and Hispanic neighborhoods of Como and Polytechnic Heights, is judged to be a case of illegal racial gerrymandering. HD93, which takes in north central Fort Worth across to Arlington, is found to have been drawn to “shore up the Anglo population.” Plus ça change.

Democrat hopes of a blue wave are high for the midterms despite numerically discouraging March primary numbers. At stake, then, for Texas in the Supreme Court case is nothing more or less than the possible upending of the political status quo. Perhaps black and Hispanic voters, who overwhelmingly cast ballots for Democratic candidates, can have their voices heard proportional to the number of eligible voters. Therein lies potential for a real wave of consequence — if not of tsunami-like magnitude — that could wash ashore the tired and tawdry flotsam and jetsam of Texas politics … at least until the 2020 census (which is its own big ol’ ball of wax, legally speaking) and the subsequent decennial district redrawing of 2021.