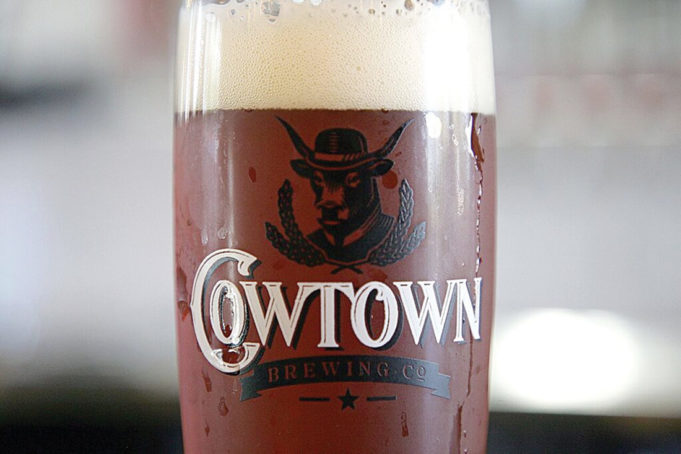 At this point, you can swing a growler from anywhere in urban Tarrant County and probably hit a craft brewery. The new Cowtown Brewing Co. stands out for several reasons. It’s the area’s first smokehouse/brewpub, which allows the owners to sell what they make from their storefront. You can also offset the effects of the sometimes-heady 9-percent alcohol-by-volume suds with barbecue. Head brewmeister and co-owner Shawn Kidwell isn’t some come-lately hop-head –– after brewing his own at home for years, Kidwell graduated from the Journeyman Brewery Certificate program at Eastfield College in Dallas before he quit his day job to make craft beer.

And then there’s the barbecue. Instead of wrangling food trucks onto the property (that was once a transmission repair shop and shares parking somewhat uneasily with neighboring Tia’s on the Bluff), there’s a big red smoker/kitchen operating just off the back deck of the brewery. Recipes come from Kidwell’s partner, Jordy Jordan’s Big D Barbecue – a tiny joint located near railroad tracks in Mansfield. Kidwell and partners worked for almost two years to make their dream of quality ’cue and local brew a reality.

At six beers, the choices are limited, but the place has been open for only three weeks, so they’re still tinkering with the mix. What’s there is good: a Kölsch, a couple of IPAs, and The Last Kaiser, a clean, spicy beer with a hint of cloves and a sturdy 8-percent alcohol content. If you don’t prefer beer (and we don’t judge), there’s a red and a white wine and a super easy-drinking, bubbly pink rosé.

As for the ’cue, I’ve eaten at Big D and enjoyed the selection there. Here, the menu is pared down due to the size of the kitchen. Brisket, baby back ribs, pulled pork, and two kinds of sausage are on offer.

On my recent visit, the brisket was deliciously rich and a little fatty (all the better to retain moisture), and the three pieces in our half-pound order passed the eye test thanks to a gorgeous coating bark. The flavor of the bark varied from piece to piece –– one chunk of beef had a perfectly salt-seasoned crust, while the other two were a tad bland.

The crust on the baby back riblets was also attractive, though they could have used more seasoning. The fork-tender meat was easy to eat, and because of the size of the bones, the half-pound portion easily served three. Cowtown has two sauces: a thin, spicy-sweet variety that was absolute perfection with a jolt of heat on the back end and a thicker, mild version that provoked argument among the diners at my table. Was the sauce too molasses-y-gooey? Or was it just right?

Unfortunately, the trailer kitchen was out of burnt ends and the sausage-laced mac ’n’ cheese on the weekend we visited. The earthy, hearty ranch-style beans were dotted with bits of brisket that upped the flavor ante. The other sides were mediocre. The coleslaw tasted only peppery, without the vinegary tang to cut the fatty essence of the barbecue, and the skillet potatoes, cut thicker than hash browns but smaller than traditional home fries, were partially burnt and not seasoned consistently. Not even a shot of the hot barbecue sauce could redeem them.

At this time, there are no desserts on the menu and very little in the way of finger foods – sandwiches, tacos, and chips round out the bill of fare. But on a crowded Friday evening with the craft beer flowing, none of the guests packed into community outdoor picnic tables or inside at the long bar-tops seemed to mind.

Kidwell is a quietly jovial host. His presence is comparable to when Jon Bonnell comes out of the kitchen at either of his restaurants – the people who know who he is become a little giddy. Kidwell is happy to talk beer, the economy, and local zoning and press the flesh with his beer-loving customers.

Next weekend, the place is hosting a workshop on pairing the perfect beer to accompany raw cookie dough. Kidwell said the dough is pasteurized, and with the three- or five-flight pairings, nobody’s going to get salmonella.