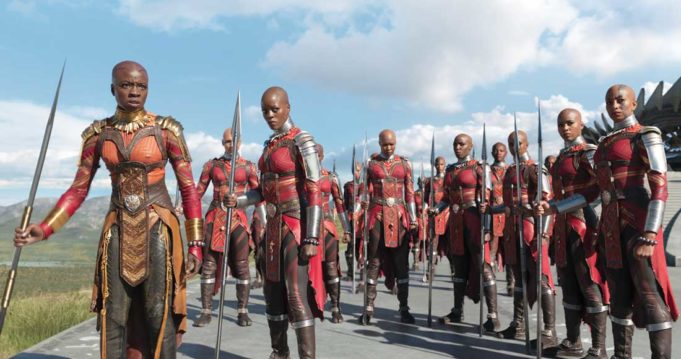 I’m in pain while I compile this. It’s true that every year, I find worthy movies that fail to make even the honorable mention category that I always include at the bottom of this article. Still, even though I’ve slightly expanded that group and herded 2018’s documentary films into their own list (which is coming in the near future), I’m still hurting over some of the works that I didn’t have space for. Abuse me for those in the comments section if you will and have a nice 2019.

1. Black Panther. No need to overthink this. Even if this Marvel action blockbuster hadn’t become its own global cultural movement, it would still be an astonishing piece of work, thanks to Ryan Coogler and his team’s fully realized evocation of an African techno paradise. On top of that, it’s a compelling dynastic drama with action set pieces worthy of a James Bond movie. Who says you can’t have a layered discussion of racism and giant charging rhinos in battle armor in the same movie? Great films are everywhere, but this one shifted the entire zeitgeist.

2. Roma. Alfonso Cuarón can do no wrong, it seems. From the story of a maid in a middle-class family in 1970, he extrapolates a breathtaking panoramic portrait of a Mexico City riven by social inequality and political corruption. Equally at home with cosseted rich people hunting at their hacienda and protesters in the street being shot by police, Cuarón declares his love for his hometown and the unsung people who make it function with little acknowledgment from polite society.

3. Sorry to Bother You. It was the horse penises. Up until they made their appearance, I found Boots Riley’s film to be an amusing and sometimes raucously funny anticapitalist satire. Then Riley whipped out his outrageously big plot twist, and I couldn’t help but gawk at the size of his balls. Spilling over with the absurdity inspired by our gig economy, this features a heroic performance by LaKeith Stanfield and comedy that leaps into the void without losing its grounding.

4. Never Look Away. Florian Henckel von Donnersmarck is back in form with this three-hour epic about a young German painter enduring the travails of Nazism and Communism before defecting to the West just before the Berlin Wall goes up. This movie works perfectly well as a portrait of German society going through the upheavals of the 20th century, but it’s even better as a gimlet-eyed examination of how an artist sees the world and turns it into meaning.

5. If Beale Street Could Talk. If you were wondering whether Barry Jenkins was a one-hit wonder after seeing Moonlight, wonder no more. His adaptation of James Baldwin’s novel conjures up the same dreamy, intoxicating vibes as his previous film without ignoring the racial injustices that blight the love of a young woman in Harlem for a man unjustly convicted of a crime. In a white man’s world, romance and the beauty of Baldwin’s prose aren’t just an escape but a means of transcendence.

6. The Favourite. Take this as a history lesson or a study in power dynamics, but this 18th-century lesbian sex farce is just great, bitchy fun. Yorgos Lanthimos brings fish-eye lenses and parliamentary food fights to this party, while Olivia Colman, Emma Stone, and Rachel Weisz all give delightful tragicomic performances. Then again, who wouldn’t savor lines like “Harley is a fop and a prat and smells like a 96-year-old French whore’s vajuju”? It’s a royal blast.

7. Isle of Dogs. A haiku on Wes Anderson’s film: A dog’s wants in life / Are human love and puppy snaps / Raindrops on peach tree. You don’t have to appreciate the exquisite craftsmanship of this stop-motion animated film to be deeply moved by its rendering of our pets’ loyalty to us and how easily we can be moved to mistreat our furry friends. Anderson’s blending of comedy and action remains excellent as always, and if you ever wanted to hear Tilda Swinton’s voice coming from a pug, here’s your movie.

8. Suspiria. This is how you remake a horror movie. Rather than slavishly copying Dario Argento’s giallo classic and its operatic design, Luca Guadagnino turns 1970s Berlin into a gray, rain-soaked place of violent social protests that frame the monstrosity lurking inside the dance academy. This gay filmmaker observes women’s bodies in their capacity for beauty and terror as they move through space. Oh, that scene with the Russian dancer being torn apart!

9. Tully. You have to see Jason Reitman’s dramedy a second time to fully appreciate the clues and jokes built into Diablo Cody’s ingenious script about a mother coming apart under strain both financial and psychological. With a harrowing performance by Charlize Theron, this is a more terrifying film about motherhood than Hereditary. This is the sort of small-scale project that tends to be relegated to Netflix these days, but it would be a shame to see movies like this disappear from our multiplexes.

10 (tie). Beast, Border, and Burning. These three adult fairy tales come from all corners of the globe, all of them with the theme of “My God, this man in my life is a serial killer.” Michael Pearce’s Beast brilliantly evokes a blazing summer on England’s southern coast and an antiheroine who’s more than a match for a monster. Ali Abbasi’s Border wanders into ancient folklore with its saga of a Swedish customs inspector whose superpowers come from trolls. Lee Chang-dong’s Burning is the greatest Haruki Murakami adaptation ever, an examination of male rage amid gorgeous shots of Korean farm country. Whether they venture into the supernatural or not, these films all render their stories into strange, wild, unnerving things.