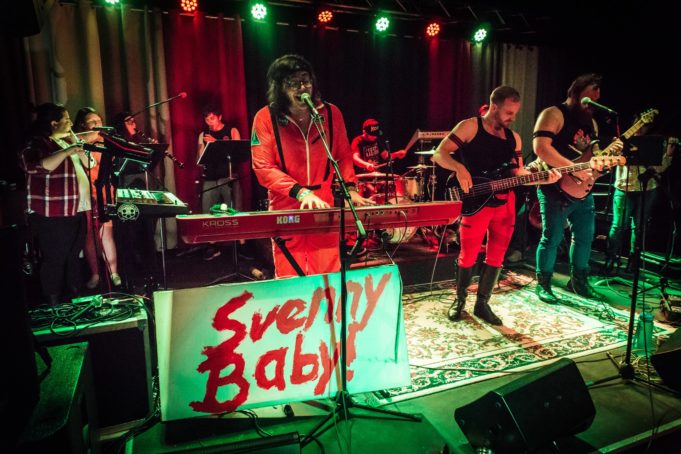 1) Veteran midwestern roots-rockers the Bottle Rockets have been around for a whopping 30 years, and they’re on tour with a new album called Bit Logic, dropping into Magnolia Motor Lounge (3005 Morton) Thursday night. Bit Logic is their 13th record, so think about that, local band dudes, as you ponder your own accomplishments, extend the creative process to a current in-development project to another year, or contemplate throwing in the towel all together. Maybe watching a band that’s been around almost as long or even longer than you have is the sort of inspiration you need to up your own game. Or you could just go watch a band of seasoned pros rock it on a club stage and have a good time. Whatever your motivation, doors to the 21+ show open at 7, cover is $12, and the music starts around 9pm. This is a video of the Bottle Rockets appearing on Conan in 1995. Holy shit. That was when I was a senior in high school:

2) Friday night at Lola’s Saloon (2736 6th St), there’s a benefit for Foundation 45, a Dallas-based non-profit created in memory of departed Spector 45 bandmates Frankie 45 and Adam Carter, who both committed suicide in 2011. Foundation 45’s main goal is suicide prevention in the DFW art and music scenes, and if you’re having a tough time or feeling like things are never going to get better and need to talk to someone, call this number 1-800-273-8255, or go to Foundation 45’s site. Seriously. There are people who will listen. As for the benefit show, the lineup includes rock-leaning hip-hop crew Nightschool Ninjas, hard rockers Dagger Club, rap-rockers We Are Band Nerds, a Deftones tribute called Elite, and metalcore collective Forget Conformity. If you own a Soulfly t-shirt or have ever attended a Sevendust concert, this show is for sure up your alley. Here’s a We Are Band Nerds video:

3) MASS’s weekend is pretty solid all weekend – if you need an alternative to the Super Bowl or want to chill with some dubbed-out vibes, Tidals, CJ Boyd, and Stem Afternoon are booked there Sunday night – but Friday night’s bill is the kind of fun, people-hopping-on-stage-to-join-in-on-backing-vocals-possibly-with-a-finger-in-one-ear singalong party I associate with the Moon Bar Big Mike Box of Rock Nights of yesteryear, or what you may think of if you ever attended any of Levi Ray’s songwriter showcases at the Grotto. Both of those clubs are pretty much dust in the wind, but Levi Ray is here to stay, and he’s dropping his first EP after years and years of strummin’ and sangin’, and his openers include Ryan Wilcox and the Sunday Shakes, Polydogs (Matt Tedder’s new, hard rock outfit that’s essentially his trio plus Nick Tittle on guitar), Ansley (full band), and Garrett Owen. You can read more about this show in this week’s Hearsay, or you can just take my word for it that if you’re into songwriter-oriented music and or rock ’n roll, you’ll enjoy this show. MASS is located at 1002 S Main. Here’s Levi Ray performing a couple years at the Grotto:

4) I like Daryel Sellers’ music, which is saying a lot because his songs are rooted in folk and folk music is not something I pay much attention to. Sellers, along with his band the Turners, are the second of four bands at MASS on Saturday night, following show openers Mañana Cowboy. Dallas-based, self-proclaimed “definitive Craigslist Band” and piano-pop purveyors the Wizzywigs play third at 11, and Svenny Baby, Arlington’s current kings of dance-focused power pop, bat cleanup. Cover to the 18+ show is $10, doors are at 8, and music starts at 9. This is a Svenny Baby video:

5) Also on Saturday: the Tin Panther (937 Woodward) hosts show curation outfit the Synaptic Empire’s Dark Side, an industrial goth night featuring DJ Augustine Strange, DJ Gokart Mozart, and special guest DJ Britton of Groov E Company. I’m pretty much a normie, so I don’t know who any of those names are, but I count The Crow soundtrack as one of my most favorite music purchases ever, so that should count for something, right? I still have a soft spot for that movie, too. Here is an informative video about The Crow entitled “10 Things You Never Knew About The Crow”