Typically, a used car lot moving to a new location isn’t big news on Blotch — but folks became curious and worried after the recent move by RLB Sales & Leasing. The company’s departure for Cherry Lane means its old building at 5925 Camp Bowie Boulevard is sitting vacant.

What will happen to the popular jackalope sculpture displayed on the building’s roof?

This week, social media has been blowing up, beginning on March 6 when someone posted a photo of a large red-and-white banner hanging on the building announcing the car company’s departure. The banner included the message, “So long, jackalope!”

The comments section was filled with people saying they love the sculpture and have enjoyed looking at it ever since it was erected in 1982. Some comments demanded that the jackalope be protected. Some wanted it moved. Others made overtures that it should be hoisted in the dead of night for protection.

“They better take care of our Jack!” a person wrote on Facebook.

“Let’s start the Save The Jackalope Campaign!” wrote another.

Nancy Lamb, the artist who created the jackalope on consignment, tagged me in a comment saying I should get to the bottom of the Great Jackalope Mystery.

I relied on all my years of investigative reporting to crack this case. I went to the Tarrant Appraisal District web site to see who owned the property, then called owner Robert Thomas, whose wife, Kay, operated a business there called Jackalope Pottery. She died in 2003. The car lot took over the building afterward.

“If everything goes my way, that jackalope will stay right where it is,” Thomas said.

Thomas will encourage any future tenants to embrace the sculpture. He has seen what happens when a tenant entertains ideas about taking it down. 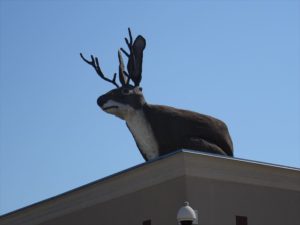 “When RLB leased the building, they were in the process of taking [the jackalope] down,” Thomas said. “People started calling and saying how much they were going to miss the jackalolpe. They wrote several articles about it in the papers. It caused so much stink.”

Thomas convinced the car lot owner to keep the sculpture or “you’re going to have people bringing their kids by and saying, ‘Where is the jackalope?’ I’m going to try my dead-level best to keep it up there. I don’t want to take it down. Whoever leases it is going to have to leave it up there.”

Some locals love the jackalope so much they’ve offered to buy it from Thomas to ensure it stays safe and on display for years to come.

Thomas, though, isn’t looking for any greenbacks.

“I’ve never been interested in selling it,” he said. “The only reason I’d sell it is if I was forced to take it down. I have people call me all the time telling me how much they enjoy it. They used to take their kids by there to see it and now they take their grandkids.”

Despite its almost four decades in watchful service atop the Camp Bowie building amid rain, sleet, brutal sun, and cold winters, the sculpture remains in good shape.

“Nancy did a good job of building it,” he said. “It’s got a good coating on. We’ve had some heavy hailstorms hit and they’ve never damaged it so far. I used to be a builder, and I built the frame that it sits on. It’s not going anywhere. It would take quite a storm to tear it down.”

Thomas, 81, said being known as the jackalope guy has “been a fun deal for many years. I was at some social function not long ago, and a woman pointed at me and said, ‘That’s the guy with the jackalope.’ Kay has been dead now 15 years, and they still talk about Kay and the jackalope.”