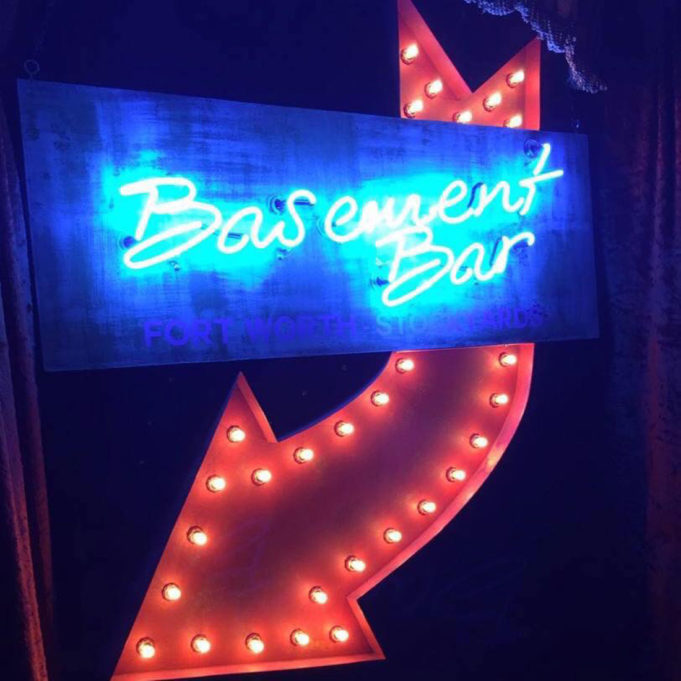 A couple of friends visiting from Europe wanted the tourist experience, so we visited the usual Stockyards places, such as Leddy’s for hats and boots, the White Elephant for beers, and Billy Bob’s for celebrity handprints. Emboldened by beer – Dutch Courage, as it is known – our guests sought to strike out for the “real Stockyards.”

On the Friday before Spring Break, West Exchange Avenue was less busy at 9pm than I had expected. On descending the stairs to the “World’s Smallest Honky-Tonk,” I was greeted by a mix of cowboys, bikers, and tourists: Here a hat, there a Harley tee, everywhere a roving eye. The Basement Bar (105 W Exchange Ave, 800 328 7448) has a limited selection of domestic bottles with some crafts in cans. After ordering my first round, I routinely asked to “keep it open.” Having been told that the bar does not run tabs, I returned to our table in the darkest corner of the place to check in with friends, one of whom had succeeded in keeping his tab open. Strange. Was it my still discernibly English accent that caused one server to force me to close out while my American friend ran a tab? Maybe, but that would be weird.

I ran a tab the rest of the time, having redirected my ordering attention to the evidently tab-friendly server. The bar is a delightfully dingy place, its ceiling bedecked with dollar bills. The main lounge spills across a divide to a stage and dance floor. A mix of new and classic country drools on …until it doesn’t. At around 10pm, a DJ showed up as a bathtub bar selling cans and Jell-O shots opened. At $2 a pop, the shots were good eatin’. However, the neon lights and dance music were just bizarre, clearing the dance floor of two-steppers. We didn’t come this far north for a West 7th experience, so we decamped to the Lil Red’s Longhorn Saloon Saloon (121 W Exchange Ave, 817 740 0078) a few doors up the hill.

A $5 cover for a live band seemed reasonable as we entered the long and voluminous bicameral bar. The atmosphere of the half-full juke-joint was that of a family party that had just crested: The young folks had gone, but the real partygoers were in for the long haul. To the south of the bar, the place was dominated by a sunken dance floor and full stage. Throughout the night, cowboy couples of all ages danced to classic country. For a while, one of our Euro travelers received some introductory dance lessons from an older lady who was with the band. The north side chamber houses the rustic restrooms and some pool tables. No patron seemed interested in stick and ball. A wide range of domestic, Mexican, and craft cans and bottles dominate the beer offerings, all at wallet-appeasing prices, while pineapple Jell-O shots and gleefully heavy-handed free-pour liquor grease the wheels of any party wagon here. Several rounds and some two-left-footed dancing behind us, we set off up and across the street to Sam’s Saloon (2546 N Houston St, 817 378 8956).

This is a one-stop shop for end-of-the-night karaoke kickin’ off of shoes. You will see tie-dye-clad grannies, young guys in denim bibs, lounge lizards, barflies, creatures of the night, and downright regular Joes and Joannas necking buckets of domestic brews and taking shots of the BYO liquor of their choice. If you want a mixer, you will need cash for the vending machine. The staff here is unfailingly friendly, and the veteran suds slingers know how to make every pressed belly feel that they have been noticed. The craic is as mixed as the singing quality. Most often your ears are soothed, occasionally assailed. Sam’s is the perfect place to finish out a boozy night of non-tourist diving. The pace and rhythm of the night from bar to bar were ideal. Get yourself some of the “real Stockyards.”