It’s about 11 a.m., and I’m walking toward the Bernie Sanders rally at Burnett Park in downtown Fort Worth to catch his noon political rally when I spot a group of young men and women standing across the street from the park.

They are holding hand-written signs, so I stop to see what they are up to and strike up a conversation with Derrick Wilson, a member of Tarrant County Young Republicans, who holds a sign that says, “Capitalism is Freedom.”

Wilson says he’d rather not participate in an interview after I tell him I’m with Fort Worth Weekly. 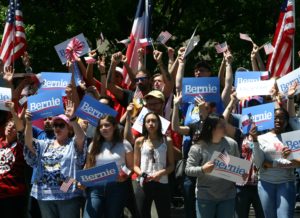 Wilson is referring to the Weekly editor, whom Wilson considers to be “far Left.”

As Wilson is talking, an older, annoying guy stands beside me chattering in my ear. 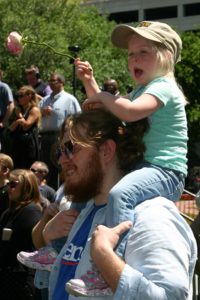 “I don’t have anything against you,” Wilson said.

“You’re probably as honest as can be,” Wilson tells me.

“There are a lot of good people in the press,” Wilson said.

“I’ve seen too much stuff from your Static page,” Wilson said. “I don’t trust that we’d get a fair shake. I’m sorry.” 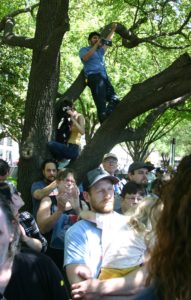 “No problem,” I say, and inquire about the various signs they’re holding.

“I have a right to speak,” Mr. A says, adding that he is not a part of the Young Republicans group.

“We’re having a conversation, and you’re not welcome in it,” I tell him.

Finally we agree on something.

I bid goodbye to the Young Republicans. 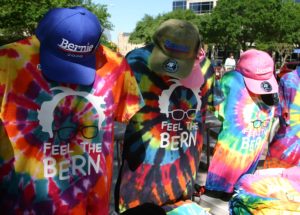 In the park, vendors sell tie-dyed Bernie shirts for $30.

I stop to speak with a Sanders campaign volunteer who sports a brightly colored shirt. She clams up when she sees I’m with the press.

“I’m not allowed to be interviewed,” she says.

Volunteers with Deborah Peoples’ campaign walk by seeking out Fort Worth residents to register. Peoples, the Tarrant County Democratic Party chair, is challenging Betsy Price for the mayor’s job.

“We think we have a lot of Democrats here who could help us win,” volunteer Declan Sloan said. “Deborah has a lot of the same values as Bernie Sanders and the Democratic party. The whole country — especially the urban areas — is starting to show blue since Trump was elected. We think Deborah has a really good shot at this.”

The 2018 mid-term elections that helped turn Texas a bluer shade of red were a “confidence booster for every Democrat in the county,” he said.

As we’re talking, Mr. Annoying walks by and says into my ear, “Rag!” and snickers before scurrying away.

I overhear a boy of about 8 standing beside his mom and looking at the Young Republicans across the street. One of the protest signs says, “Let the Cows Fart.”

“What does that mean?” the kid, Alexander, says to his mom. He is wearing a t-shirt with “Be Kind” printed on front.

“They’re trying to say we’re being too crazy about air pollution,” his mom, Sasha, tells him.

Alexander is pondering that when his mom says, “Do you think those people support Bernie?”

“Politics can be hard to understand,” I tell him.

This rally is off to a fun start, although it is much tamer and smaller than the one I attended three years ago when Trump came to downtown to rally his supporters while seeking the presidency.

It’s almost noon, the official start-time for the Sanders rally, and I walk to the designated media area near the stage. Hundreds of people press close, singing “All we are saying is give Bern a chance” to the tune of John Lennon’s “Give Peace a Chance.”

As if by cue, Lennon’s “Power to the People” begins playing over the loudspeakers.

Lennon’s voice sounds great. His lyrics are still relevant. It’s been 39 years since an assassin killed the former Beatle, and I suddenly find myself missing Lennon, his passion for activism, and his endearing silliness. I shed the thoughts quickly. Lennon is dead. New activists are speaking now, and I guess I should listen to them and stop slipping into nostalgia for what seems like a purer time. It wasn’t. Things were just as fucked up then as they are now, but the music seemed better. That’s probably why Bernie’s camp is blaring old Lennon and Neil Young songs. 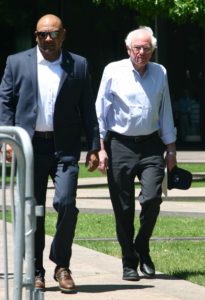 Finally, after several speakers tout their favorite candidate, Sanders makes his way to the stage accompanied by a big bodyguard. The crowd cheers. The Vermont native, red-faced in the 80-degree Texas heat and sun, wastes no time igniting his supporters and tearing into President Donald Trump. 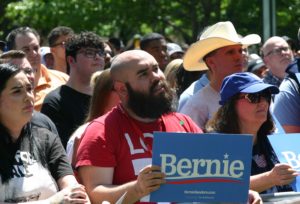 I, too, am getting red from the heat. Sweat pours down my face, rolls across the lenses of my glasses, drips on my camera, and soaks my shirt. I’m down on one knee, resting for a moment, when two young girls with Bernie signs begin waving them in front of my face like fans, providing a cool breeze. I thank them.

Sanders keeps up the peppering, calling Trump a “pathological liar and a fraud.”

After the applause dies down, a loud, piercing voice projects over the crowd: “Liar! Bernie is a liar! Booo!” 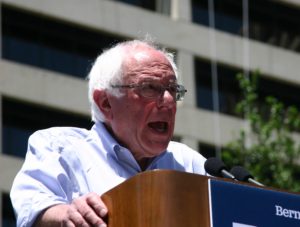 A couple of guys are heckling from the nearby sidewalk. Sanders’ volunteers hustle over to try to shut them up, but the guys aren’t budging.

“I’ll stand on a public sidewalk and say whatever I want!” one of them yells. “Go Trump!” 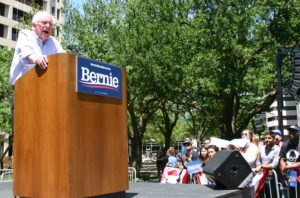 I head back to the office to write up this little blog post, and I look on Google to find out how Derrick Wilson spells his name. (I forgot to ask — Mr. A had thrown me off my game with his incessant blabbering.)

I notice Wilson has posted this on his Facebook page: “We ended up with 14 protesters at one point, comprised of both Tarrant County Young Republicans and TCU College Republicans. A really great group, all under 40, standing up for liberty. We were certainly heckled and received ‘the bird’ a lot from the Bernie people, but we also received a whole lot of support from passers-by.

“Bernie’s rally looked like maybe a thousand, carefully staged for the camera,” Wilson’s post continues. “It didn’t even close to fill the park, and it’s a small park.”

He ends by saying, “I can’t wait to see how the media butchers our quotes tomorrow!”