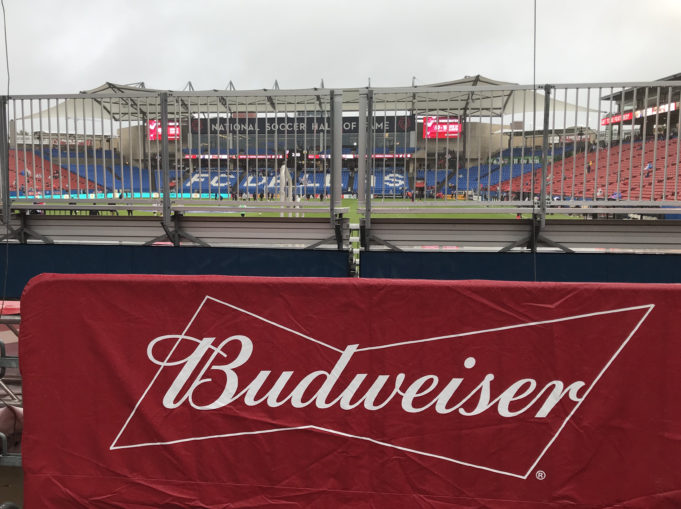 Beer and soccer go together. Stateside supporters of European sides have turned day drinking into an art as they parade into pubs at whatever hour of the morning the time zone separation requires. In England, knowing where you’ll consume pregame pints matters as much as your seat location. So as I continued my occasional series on where to get different kinds of beers at various sports venues, I thought it made a great deal of sense to include the home of the local MLS side.

FC Dallas plays its home games in Frisco’s Toyota Stadium. When attempting to understand what brews one might find at a venue, it always makes sense to look at which beer companies have signed up as sponsors. FC Dallas has overachieved and acquired two major suds partners. Heineken supports at the Signature Partner level and is also a partner of the adjoining United States Soccer Hall of Fame. Budweiser has the designation of “Official Partner.” Both have significant presences within the facility. 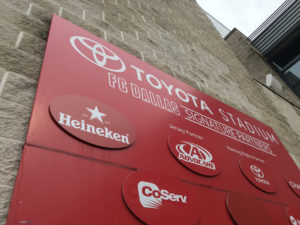 As divisions of the world’s two largest brewers, both can bring more to the party than just their namesake brands. I have always felt that one of the positives of the craft beer explosion has been that it forced major beer companies to diversify their own offerings, whether through acquisition or their own innovation. So while the offerings at FC Dallas all come from either the Heineken International or Anheuser-Busch InBev families, beer fans can likely find their preferred styles at Toyota Stadium if they know where to look. And that’s the point of this blog post – to clue you in. 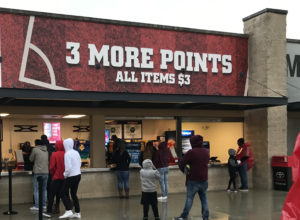 First, if you’re into Dos Equis, you will never have a problem finding something you like. Of the almost 20 beer sales outlets I visited, nearly all of them had the Mexican-style lager in cans or on draft. They also have the amber variety on tap in the bar on the north end of the Winners Club presented by WinStar World Casino and Resort and the west-side bar of the Hall of Fame Club. Fans of pale lagers who prefer Tecate Light should head to the stadium’s southwest corner and look for the 3 More Points stand. You can buy a 12-ounce can of the stuff for $3. They also offer 8-ounce Buds and several other concession items there for a three-spot apiece. The Hall of Fame, by the way, serves beer even if you visit it when the team is not playing. 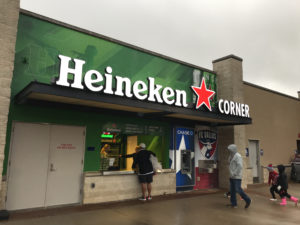 You can find most other styles of suds in the stadium if you know where to look. The club has branded most of the southwest corner as the Heineken Corner. You can find the namesake brand in several (though not all) concession areas. But pay special attention to the stand specifically labeled as “Heineken Corner.” It represents the only spot where you can also acquire Heineken Light or Heineken Zero, The latter contains no alcohol, and the company has been pushing it – have you seen the TV ad with guy who pops one open in a business meeting? They even devoted some ribbon board space to advertising it during the game.

That corner stand has one of the best selections in the park, as it also stocks cans of Dos Equis, Tecate, ZiegenBock, Karbach Weekend Warrior Pale Ale, and Shock Top Belgian White. 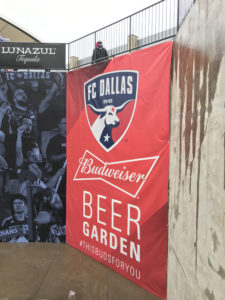 There’s a beer garden at the other end of the pitch, too. There you’ll find taps of Karbach Love Street kolsch,  Michelob Ultra, ZiegenBock, and two pouring the brew after which the beer garden is named, Budweiser. The Beer Guardians supporters group has a banner on the seating section below the Bud beer garden. 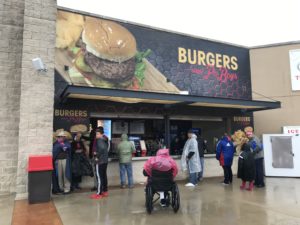 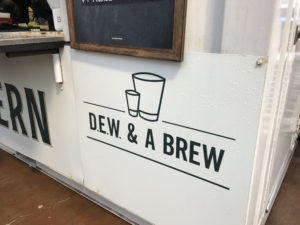 If you’re craving something stoutish, make your way to East Concourse the Tully Tavern, which touts “Tullamore D.E.W. and a brew.” There you can chase your Irish whiskey with a Breckenridge Vanilla Porter. It’s currently the only spot in the stadium to acquire a stout/porter style beverage.

Inside the stadium during an FC Dallas match, you can buy a maximum of two beers at a time, and they stop selling after the 75th minute of play.

If you want to mix in some hydration, Aquafina bottles are available all around the stadium. And once you’re done with your bottle or can, look for the containers marked “Reduce Reuse Recycle.”

Toyota Stadium has a capacity of just over 20,000, so, while not small, it’s not as huge as its pro baseball or football counterparts. If you’ve got your taste buds fixated on a certain brew described here, it won’t take you long to get to it, usually without the need to navigate stairs.

One of the beautiful parts about enjoying the beautiful game locally is that games take place during normal drinking hours. Enjoy your soccer and your brewskis responsibly – nobody likes a hooligan.