Some pairings don’t work out as well as one would have hoped: Jose Mourinho and Manchester United; Romeo and Juliet; politics and ethics.

Others endure through history: Lennon and McCartney, Pinky and The Brain, politics and corruption.

One that falls into the latter category is beer and pizza. Many a person’s outlook on life has improved via a combination of pepperoni slices and 12-ounce cans. I got an opportunity to interview them together and I asked some probing questions. How did they meet? How does the pair feel about having the same boss? And then something, well, unfortunate happened. You’ll just have to watch the video interview to see how it unfolded. Note: there is a surprise appearance from a Rangers Hall of Famer.

We did the ill-fated chat session at Texas Live! (they add the exclamation point – not my grammatical improvisation).The facility celebrated its one-year anniversary Friday. It was fun. There was 13 Gold beer and Pudge’s Pizza, which you can actually find every day at TL! (my abbreviation, not theirs). 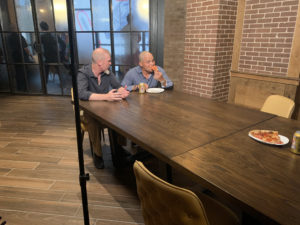