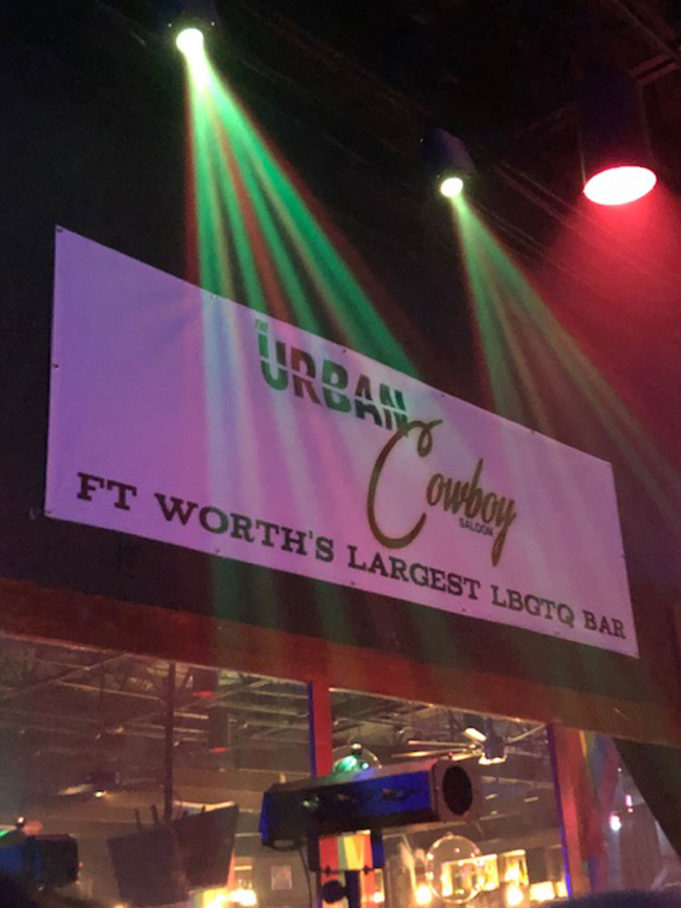 One recent hot and sweaty Saturday night after a long day of imbibing beer and devouring tacos at a house party, three hardened divers and I set out to find signs of a gay-bar scene in town. Only a few years ago, the Gayborhood – a smattering of places on or around Jennings Avenue on the Near Southside – looked ready to blossom but seemed to die out atop the smoldering ashes of the Rainbow Lounge after that beloved institution burned down back in 2017.

Our first stop was 515 Bar (515 S Jennings Av, 817-338-0515), one of the last holdovers from the scene that was. The building is a utilitarian, standalone, white, windowless rectangle –– more art installation or forgotten bunker than a place of revelry. On entry, we were greeted by a well-lit space with chessboard tiles on the floor and a pool table up front. The long bar leads to the back of the room where there are a few high tables and stools strewn throughout. Guys bellied up to the bar, couples chatted, and an older mixed group sat watching the Cowboys’ preseason labors. My first impression was of a scrupulously clean neighborhood wattering hole. Our smiling barkeep, Tito, was welcoming and remained attentive and grew chatty as our visit went by. A few 12-ounce jugs straight from the freezer welcomed Bud Light and Coors Lights from the tap. Tito liberally poured from the decent liquor selection into short glasses. I bantered with a couple of guys stationed on stools while Tito figured out a ropey-looking Coors Light on one of our three rounds. For a Saturday night, the place was lightly populated, though as we were finishing drinks, a large mixed group rocked up and the atmosphere grew livelier.

We ambled a few miles away to the Urban Cowboy Saloon (2620 E Lancaster Av, 817-707-5663). The large, pebble-dashed building from the outside softens within to a disco honky-tonk. Think of a regular honky-tonk, replete with a glitter guitar hanging above the dance floor, but with a disco-and-dance soundtrack. The center of the place is filled with a curved bar area. There are a few Rahr taps, though one of them serves $2 Coors Light. I opted for a pour of Rahr Blonde, which was disappointing bordering on unrecognizable from the effervescent, crisp yellow treat that I love. The subsequent Coors Light was its usual self, and the well vodka-tonic was par-for-the-course harsh. We shot some pool on one of the three tables. Lucky for us, the vomit and beer had long dried on the cloth such that it did not hinder play on an otherwise good table. The place hosts drag acts, but we did not see any in the time we spent after 10pm on a Saturday. Perhaps the summer heat deterred would-be boozers, as the Cowboy was dead. There were perhaps 20 people dotted throughout. One standout feature was the large fenced-in patio with clear views of downtown from its elevated position.

Across the street, we met our final stop of the night, in theory. Club Changes (2637 E Lancaster Av, 817-413-2332) checks all the boxes of a late-night dive bar: dark, a bit dingy, has a pool table, busy but not packed, and serves super-strong mixed drinks. On the last point, I was unable to finish my tall vodka-tonic, which was so strong and astringent from cheap vodka that it hurled me off the cliff of buzzy-ness into an ocean of drunkenness. That mixed drink was part of a round that included two liquors, one beer, and one OJ that totaled a mystifyingly low $8. The highlight/lowlight of the night came at Changes, wherein one person pinned another up against the wall and starting slowly grinding on them while their partner held a phone up high behind the other’s shoulder, evidently keen not to miss a beat of Insta-life.

Ordinarily our diving would have ceased at this point, but we were thirsty for a place dripping with revelers. The three dives had all been somewhat under-populated. Back in the direction of Bar 515, we headed to the tried and trusted Club Reflections (604 S Jennings Av, 817-870-8867) for a nightcap, some drag queens, bottled beers, and formation dancing to party tunes. Happily, the place was packed. We left content and went with our designated driver for the now-traditional big feed at the nearest Whataburger. What a time to be alive.