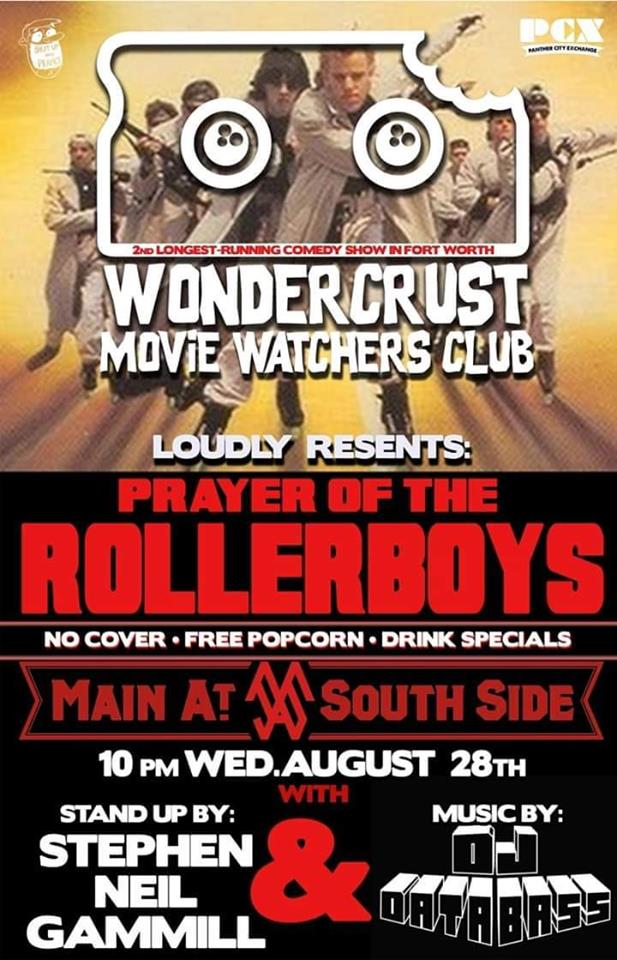 1) Tonight (Wednesday), catch a crappy movie with live comedic commentary courtesy Wondercrust Movie Watchers Club at MASS (1002 S Main). Everyone’s favorite cadre of local chuckleheads will be poking holes of hilarity in Prayer of the Rollerboys, a 1990 low-budg, dystopian thriller starring the late Corey Haim and the great Patricia Arquette as people who are involved in a futuristic white supremacist rollerblading cult that pushes a drug called Mist on disaffected teens. I don’t remember seeing this movie on the shelves at Family Video when I was a kid, but it has all the hallmarks of some truly enjoyable VHS schlock, and I’m sure the Wondercrust crew’s jokes will soar like Chris Haffey did over the world record for longest inline skating jump. Full disclosure: I didn’t know who Chris Haffey did until I searched for “famous rollerbladers,” which I’d argue is not only the funniest thing I’ve searched for all month, but a concept I’ve never even considered existed. Think about it: Have you ever even given inline skating suitable credence as a sport, let alone allowed that it has stars and celebrities? Even curling is a better-respected sport than inline skating, and curling looks like a sport that was invented by Lorne Michaels. Anyway, besides the MST3K-treatment of a bad film, local standup standout Stephen Gammil will be doing a set of bits following the movie, with the ever-reliable DJ Databass slangin’ stone-cold cuts of hip-hop, funk, and reggae throughout the night. The free event starts at 10pm. Here’s the Prayer of the Rollerboys trailer; I watched it and got the idea that the movie looks like if someone made a PS4 game out of a concept that might have been/probably was pitched for the Sega Genesis 27 years ago:

2) Huh! I really enjoyed writing the previous listing! Hope you find an enjoyable moment while doing your job today! If you don’t, though, perhaps you can gain a similarly life-affirming dopamine hit from looking forward to MASS’s Thursday night show, which features garage-y punks Annie Void (aka the cutest band in Fort Worth) a band from Shreveport called Ghost Foot (I’m gonna call it “low-rent casino punk”), Cameron Smith’s Lou Reed-ish Sur Duda project, and a garage rock band called CAMPS, who, like Ghost Foot, hail from Louisiana. Doors to the 18+ show open at 8, the lineup starts at 9 with CAMPS, and cover is $7. Here’s a full, 24-minute Annie Void set from some house show in May of last year:

3) Whenever Office 365 interprets my clumsy touches as an expression of my desire to zoom in on a word doc 300%, or assumes I would want to change fonts because I copied and pasted a link that exists in Georgia or whatever, or otherwise does something that seems arbitrary but was obviously written into the program as some helpful solution to a problem most people likely never encounter, I actually breathe a sigh of relief (after a teeth-gritted growl of irritation). If laptops function like a frantic dog on the verge of a bladder explosion because it can’t decide on which patch of grass to pee on, I’m not really going to worry about robots taking over the world anytime soon. I’m sure climate change will roast us long before the Terminators are up and running. On an unrelated note, the Arlington music scene hub the Treehouse is having a music festival on Friday, sponsored by college-student-minded entertainment collective, The Football Team UTA, and happening at Truth Vinyl (300 E Abram). Live music kicks off in the Truth Vinyl alley with RAVS, followed by Igimeji, Chancy, and Svenny Baby, and EDM will throb all night from Truth Vinyl’s inside stage. Music starts at 9, cover is $5, and I assume it’s 18+, because college students. Other details: BYOB inside Truth vinyl, or you can pop into Hooligan’s for cocktails and draft beers. RAVS plays a lot of covers, apparently, but here she is at the Prophet Bar from last year, playing an original song over a bunch of inconsiderate people talking:

4) Also on Friday: Lola’s Trailer Park 92735 5th St) hosts the album release show for Blood Gold, the debut from folk duo Burnett (formerly the Phantom Sensation). You can read more about that band and record in this week’s Hearsay. Also on this bill: The Matthew Show and the Rye Boys. Show is 18+, cover is $10, music starts at 8pm. Here’s the Burnett video for “The Deep Ditch,” mentioned in the Hearsay column referenced above:

5) On Saturday, the Ridglea Lounge (6025 Camp Bowie, next to the Gas Pipe) bill includes Sub-Sahara, Bulls, and All Clean. File under post-punk, high volume, big Magic the Gathering deck energy. Show is all ages, doors are at 7, cover is $8. Here’s Sub-Sahara playing live at Armoury DE back in February. That must have been a chill(y) night!