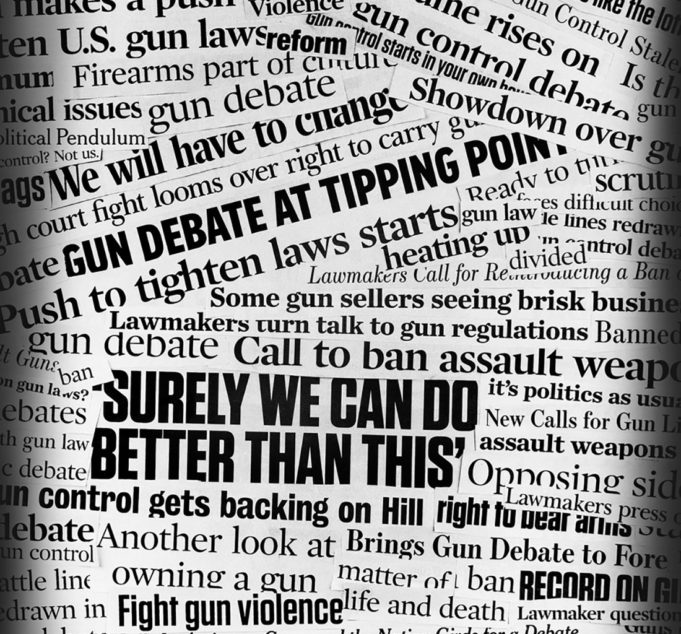 Politics demands extremism. Though life presents itself as a quantifiably infinite succession of gray areas, we must vote for the politician with whom we agree on most things (not all), as opposed to any lawmaker who would dare offer to deal with arising problems situationally. The only alternative for us citizens is to study the existing and proposed laws and become politicians ourselves. At least no one I know is that egomaniacal.

Beliefs are a little different, that someone believes that life starts (or doesn’t) at Point X or that accepting the political and/or financial support of white supremacists makes you a racist (it does) or that more guns will mean fewer gun attacks.

“More guns = fewer gun attacks” doesn’t seem to make linear sense at all, but let’s think about this situationally rather than in one-size-fits-all terms like a lawmaker has to. Situationally, I would love to see more armed security in churches and schools, the two places where most gun attacks happen. Since most shooters are lone (white) gunmen (emphasis on the “-men” part), the amount of “more” guns would be negligible, assuming each church or school would be outfitted with between one and several security guards packing heat. In this case, “more” would probably equal “fewer.” Just like in that Fort Worth church on Sunday. That’s when a gunman was killed by armed security after opening fire and fatally shooting two parishioners. Saying the shooter shouldn’t have been there in the first place is Pollyannish at best. That’s not the real world, folks.

The problem is that by saying armed security is permissible in churches and schools, lawmakers are essentially giving the green light to everyone and anyone to bring their AR-15s to football games, concerts, restaurants, and other public gathering places. Just remember that it is within your rights to report these erstwhile vigilantes to the police – unless you’re a mind reader and are able to tell that they’re not going to open fire like just another mass shooter. In this case, “more” can equal “more.”

There is no politically viable option, and the shootings will continue whether or not we implement universal background checks, buybacks, assault weapons bans, whatever – for some reason (potential war against the cops? potential war against the United States military, the greatest fighting force on Earth?! good luck with that!), we love our precious mass-casualty firearms. Plus, laws don’t mean anything to bad guys. That’s why they’re bad guys.

It’s sad to say, as “woke” as I am, but not protecting myself just doesn’t seem like the answer anymore. And I am well aware that no other developed nation has a gun problem, even though they also have violent video games and mental health issues. No one loves piercing, bleeding death quite like we do. “More” can equal “more,” and almost always will, but understanding that I am relatively healthy of mind and body and would be committed to responsible gun ownership, I and my pea shooter would rather be the ones deciding the fate of me and my family out shopping or at the movies, not lawmakers and certainly not some triggered white guy with an AR-15. — Anthony Mariani

The Weekly welcomes submissions of all political persuasions. Email Editor Anthony Mariani at anthony@fwweekly.com. Submissions will be edited for clarity and factual content.