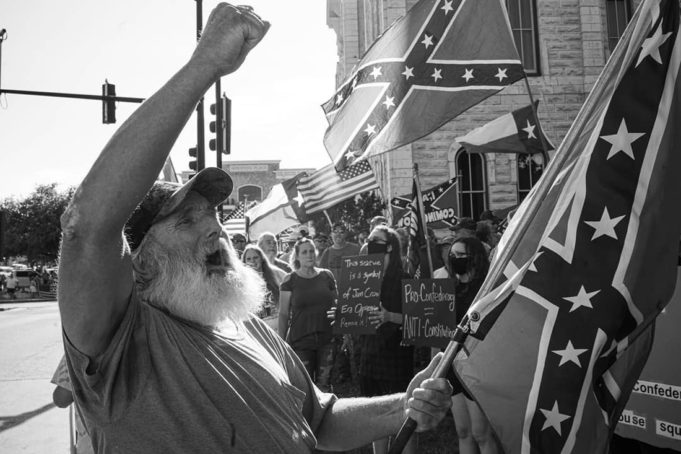 She was standing near a young Black male who was exchanging heated words with a white man with a long gun, a pistol, and a knife. When the man allegedly pushed a nearby young white woman, she told him to stop.

“He slapped the phone out of my hand and shoved me to the ground,” recalled the woman, who asked to be named only as Nicole to protect her privacy. “He held the knife by his shoulder like he was ready to stab me. If I moved a muscle, I thought he was going to stab me. There was no one holding him back.” 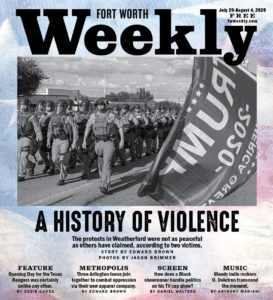 The day started out tense for Nicole and Kambrie Graue. They were prepared to hear racist rhetoric while protesting a Confederate monument in Weatherford but were not ready to experience the violence.

Nationwide protests over the past two months have arisen in response to police killings of unarmed Black men and women and President Donald Trump’s divisive rhetoric and actions. Trump’s tirades against non-white Americans have driven a new generation of activists to target symbols of racism, like Confederate monuments. In response, often armed and often white counter-protestors are taking to the streets to defend the monuments to the Civil War losers and support law enforcement.

Nineteen-year-old Graue’s boyfriend, a Black man, attended Weatherford High School and had lots of stories to tell about his time there, when he was routinely verbally attacked with slurs like “Who let the monkey off the chain?” and “I will kill all the [n-words] in the school.”

Graue, an active supporter of the Black Lives Matter movement, was tasked with arriving at the Parker County Courthouse at 2 p.m. that Saturday. Successive Black Lives Matter groups from Fort Worth and Dallas were scheduled to arrive in coordinated waves for a planned march and protest near the Confederate monument near the Parker County Courthouse late that afternoon. 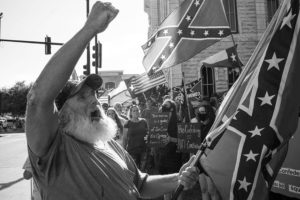 Supporters of the Confederate monument were preparing a counter-protest and began arriving by the hundreds. As a nearby parking lot began to fill with trucks, rifles were pulled and Confederate flags were unfurled. Around that time and near the Tarrant County Courthouse, Nicole prepared to join Graue. The morning and afternoon had seen hundreds of Fort Worthians march in support of law enforcement (“ Hundreds Rally for the Police Downtown,” July 25).

“There were altercations but no physical attacks,” she said, referring to the Fort Worth rally. As Nicole and fellow BLM members with Enough Is Enough prepared to drive to Weatherford, another group, We Take the Streets, was beginning the same trek from Dallas.

After arriving at Cherry Park, which was within walking distance of the monument, Nicole saw Graue and a small group of protesters heading toward the park. One Black Lives Matter organizer told the Fort Worth and Dallas protesters that a large counter-protest group had formed. Violence was likely, the protesters were warned.

As members of Enough Is Enough, We Take the Streets, and other groups approached the monument after 5:30 p.m., Kambrie and Nicole recounted being assaulted by a crowd (which the women described as a “mob”) during clashes that lasted around 30 minutes. Facebook Live videos corroborate all of the accounts.

After the knife was pulled on Nicole, Graue was blindsided by a white woman during an altercation that Graue described as an unprovoked attack. Minutes later, a white man allegedly grabbed Graue by the throat and threw her to the ground. Shaken and terrified, Graue stayed near protesters as counter-protestors threw water bottles at their group and called the Black men the n-word and the white female protestors n-word “lovers.” 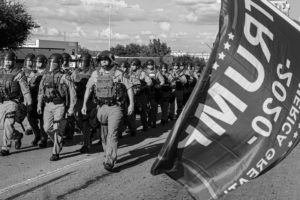 The third and final assault yet again came by surprise, Graue said. To endure the screams of hatred being hurled at her, she closed her eyes. When she opened them, a white man lunged for her sign and hit her lip. Nearby, Graue’s boyfriend deescalated a situation when a white man held a knife to his hip.

The overwhelming number of counter-protesters pushed Graue, Nicole, and the Black Lives Matter members up Palo Pinto Street and away from the monument.

“The Confederates continued to follow us,” Graue recalled, referring to the supporters of the Civil War losers.

As the protesters marched with no police protection, cars revved their engines nearby and verbally threatened to run over the men and women, Graue said. Back at the park, trucks sporting racist flags drove around the regrouped protesters.

Back at Cherry Park at around 6 p.m., the protesters were advised not to directly head home to avoid being targeted. Nicole continually checked her rearview mirror as she drove east toward Fort Worth. The next day, she turned off social media and did her best to process the hatred and racism that she had witnessed and documented. Images of snipers and other civilians aiming firearms at unarmed teenagers continue to disturb her.

The day following the violence, Nicole told herself that she would never place herself in that situation again. Her views have changed.

“Yesterday, I would have said I was not going back,” she said. “This is bigger than a Confederate monument. This about dismantling hate that people have for Black people.”