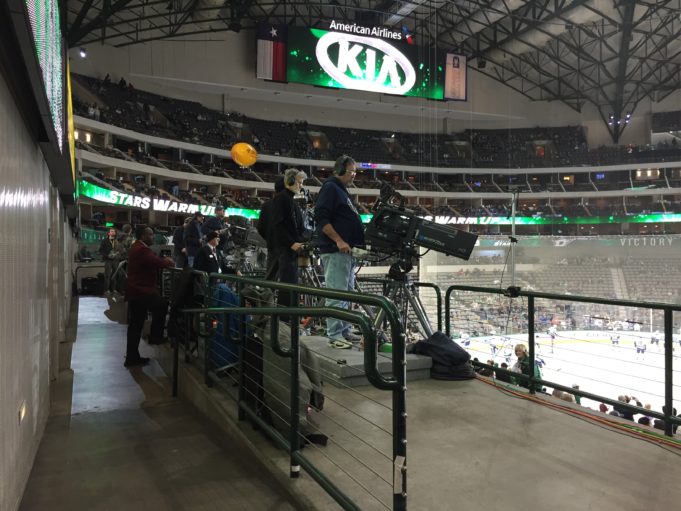 Unless you’re a player, coach, official, front office employee, or one of those birds that sneaks into enclosed arenas sometimes, you can’t attend a professional ice hockey game right now.

The COVID-19 outbreak has forced the NHL to play its postseason without fans present. Luckily, the league does televise a substantial portion of the tilts, including up to (so far) five extra periods on occasion. So we can at least watch the Stanley Cup playoffs on TV. But, as it turns out, even that isn’t quite the same.

Broadcasting personnel both in front of and behind the cameras have had to deal with loads of challenges because all the games are being played in one of two “bubbles” in Toronto and Edmonton. The league gets pretty stingy with access to those facilities as they try to minimize community spread of the virus. That means most of the announcers, including local and national rightsholders, will work games remotely. It also unfortunately means a lot of the freelancers who would work these telecasts if the Stars played the games at American Airlines Center have lost a lot of work. I count many of them as friends and have a great deal of sympathy for their situation.

I can identify with the plight of the on-air folks who aren’t in the bubble, too. I have some low-level experience in that space, having called hockey games on cable TV for Fort Worth’s minor league teams through the 1990s and early 2000s. So I thought I’d try to offer some insight into what these men and women are having to do as they try to present quality broadcasts.

Their descriptions of the action come from watching the games on TV monitors. Some don’t even work in the same city as their broadcast partners. They watch a “world feed,” which means a single crew sends the same feed to all home and road broadcasters. Normally, each team controls most or all of its own cameras, so the crew can customize its storytelling to match its viewers’ preferences. The local director (Mark Vittorio for Fox Sports Southwest in North Texas) does have control of one camera, but the signal takes a while to get from the Great White North to the Greatly Scorched South, and the delay limits its usefulness.

A hockey puck, you may have noticed, is a lot smaller than, say, a basketball, and it often moves rapidly and unpredictably. So one of the play-by-play announcer’s key duties, even on television, involves keeping the audience apprised of who’s playing that little piece of rubber and what’s happened to it. That makes correct identification of players paramount.

They have last names printed on the jerseys, but those tend to look pretty tiny from a standard hockey press box or other broadcast spot (the home announcer location in the American Airlines Center is lower, along the concourse). The numbers, however, are crucial. Luckily, NHL jerseys generally provide nice big digits with plenty of contrast, so they’re easy to see from the press box . . . except that the likes of Josh Bogorad and Daryl Reaugh don’t get to work from their normal perches. And even in high definition, I feel sure those numbers don’t present themselves as easily via a monitor. And while it’s always difficult to pick out someone wedged against the nearside dasher boards, I bet it’s even tougher on a screen.

So that means they need to fall back on other techniques one uses to identify players. These come in handy even in a normal broadcast situation, but my guess is they apply even more now.

Knowing whether a player shoots right-handed or left-handed is pretty standard, as is basic height and build. Some guys have a unique skating style.

It helps to know a player’s linemates or defense partner.  If you’ve got a positive ID on the left-handed centerman, you’ve got a great chance at guessing the identity of his wingers. Of course, injuries or ineffectiveness can lead to in-game changes to those arrangements.

It was always crucial for me to watch the visiting team’s pregame skate to get a feel for line combinations and idiosyncrasies. For full-time broadcasters who’ve learned the league, that’s probably not as big a deal, but I’m sure NHL broadcasters have their own in-arena rituals they’ve had to abandon, including frequent encounters with players and coaches to gather inside information.

It helps to know who typically plays special teams. If you know a guy never kills penalties, you’ll check yourself to make sure it’s really him out there shorthanded – more likely the number eight you thought you saw on the bunched-up jersey was really a nine.

Not being able to see beyond the screen presents challenges. Live, for instance, you can spot a line change behind the play out of the corner of your eye. From the screen, you’re guessing at it. They’ve given them a wide shot feed on a second monitor, so maybe that helps, but it’s still something new to get used to. Face-offs become even more important for resetting the lineup and getting an idea in your mind of who’s taking this shift.

A technique one can use when unsure about who just performed an action is to alter one’s sentence structure. Instead of saying “Faksa flings the puck toward the net,” you’d say, “The puck is flung toward the net . . . by Faksa.” The extra syllables buy you additional time to identify the shooter.

Of course, no matter what pronouncements an announcer makes on the air, they need to convey the emotion of the game. I can imagine that summoning the necessary energy is more challenging without a crowd. Luckily the playoffs generally provide great drama, and even those of us who watched Stars-Flames Game 4 from our couches Sunday no doubt were able to summon the requisite excitement around Jon Klingberg’s overtime game-winner.

I knew it was him because he’s tall and he shoots right-handed and he’s got a recognizable single-digit number . . . and because Josh Bogorad nailed the call. I look forward to more like it – both the goal and the description of it.