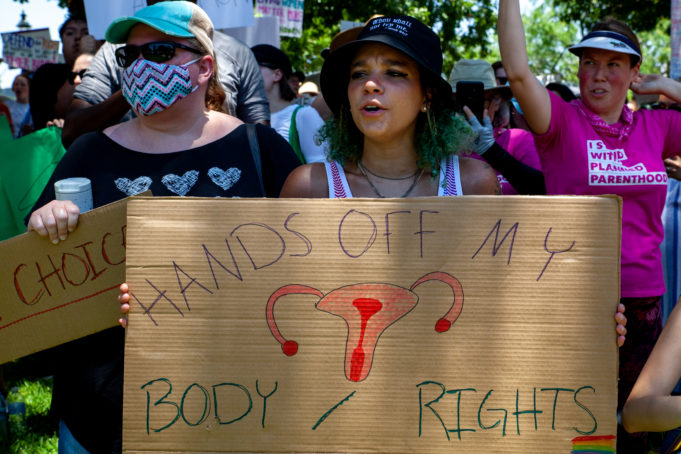 As of Friday, Americans no longer have a constitutional right to abortion. On Saturday afternoon, droves of protestors came to the Tarrant County Courthouse downtown to raise their voices against the Supreme Court decision.

“Today, I am telling you,” said Deborah Peoples, the Democratic candidate for county judge, “we have to recommit ourselves. We have to stay focused. We have to be ready. We have to be willing to send a clear message to the Supreme Court that not only did they make a mistake, but they made the biggest mistake of their lives.”

At this, the crowd broke into cheers over her voice.

Estimates on crowd size range wildly from 700 to 2,000. More than 600 people registered for the event online.

Local group Bans Off Our Bodies coordinated the event via the website We Won’t Go Back, the platform that spawned hundreds of protests across the nation in reaction to SCOTUS’ recent decision to overturn 50-year-old Roe v. Wade.

Protestors assembled at the courthouse steps at noon in 100-degree plus temperatures, listening and cheering along to a set of speakers, including District 9 City Councilmember Elizabeth Beck and Chris Nettles from District 8.

Afterward, the group gathered for a march downtown.

Ages in the crowd ranged from high school students to those old enough to know that this feels all-too familiar.

“I’m here for all of these young women,” said Laurie Ward, of Fort Worth, gesturing to the crowd marching down Main Street. “These kids’ rights have been stripped away. I’m too old. It’s for them. We need change in this country, but they’re just going to have to fight like we did.”

The younger people in the crowd whom I talked to seemed acutely aware of the high stakes of the ruling.

“My mom had me when she was 18,” said Brooke Barnes, of Wichita Falls, “and that was her choice. It was nobody’s choice but hers.”

Barnes said she wants the same choices her mother had.

Barnes also has concerns for her rights as a member of the LGBTQ+ community.

In his majority opinion, Justice Clarence Thomas suggested the court reconsider cases that took precedence from Roe, including the case that guarantees the right to buy contraception, the law legalizing same-sex sexual activity, and the law legalizing gay marriage.

For same-sex couples like the Contrerases, who married in 2015, the fear is real.

“We know that’s next,” Viviana Contreras said. “It’s anger and fear in one.”

Throughout the event, calls to action included registering to vote, donating to organizations that help connect people to abortion resources, and building community.

As of right now, abortion remains legal in Texas until the detection of cardiac activity but not for long. The state has a “trigger law” outlawing abortion that will go into effect about 30 days from now. 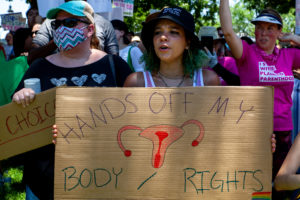 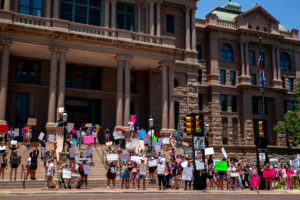