Home Calendar Big Ticket Wednesday Matinees
SHARE
Facebook
Twitter
If you’re a reader who picks up this newspaper as soon as it hits the stands on Wednesdays (and we thank you), here’s your reward: The two events we’re spotlighting this week are both movies that screen tonight, so there’s still time to ditch your other plans and heed our advice immediately. 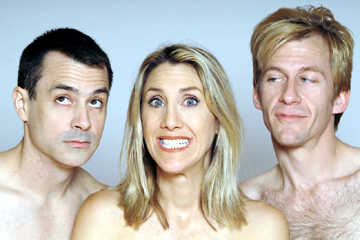 Q Cinema’s first offering of the new year, Outlaugh! is a concert film taken from the similarly named standup comedy festival’s inaugural edition, held in Santa Monica, Calif., in July 2005. The festival is headlined by lesbian icon and sometime jazz/Broadway singer Lea DeLaria and features performances by troupes called The Gay Mafia and The Nellie Olesons, who rendered the shower scene from Psycho in interpretive dance. It also boasted Andre Kelley as a rapper named Lisp. (“I’ll just get you high and fill you with booze / Well, that’s how it happened with me and Tom Cruise.”)

There’s also some gay content, though not nearly as much, in Hou Hsiao-hsien’s Three Times, a tantalizing experiment that came out last year but never played in North Texas movie theaters. This Taiwanese film stars the same two performers (female actor Shu Qi and male actor Chang Chen) as pairs of lovers in different stories that take place in 1911, 1966, and today. The present-day segment, which has Shu playing a bisexual rock singer, is the weakest of the three. Much better are the other two — the 1966 story has a terrific languidly erotic atmosphere, while the one set in 1911 utilizes the techniques of silent film. This bold exercise in style deserves a look.